Cathedral of St. Etienne of Toul 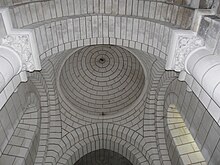 In the architecture of church construction , yoke refers to the vault section of a church nave between four supports , often separated by belt arches . A yoke is therefore located as a space compartment between four supports - z. B. the crossing square . You can see the yoke division when you look into the vault of a church nave: The strong diagonal vault ribs extending from the supports are divided into yokes laterally by the walls or by dividing arches and lengthways by belt arches.

Separated by larger sized transverse arches and vaults from the rest by a dome architectural highlighted etc. is in many Roman or baroque the yoke churches before the chorus ; it is known as the “Vorchorjoch”. For larger church buildings with a transept , it is usually identical to the “Vierungsjoch”.