This article explains the chancel, for organ choir and tribune see choir gallery .

The choir in the narrower sense (inner choir) of a typical church floor plan, marked in red. The choir is formed by two choir bays. The semicircle (the choir apse ) adjoining the central nave on the right does not belong to the actual choir room. 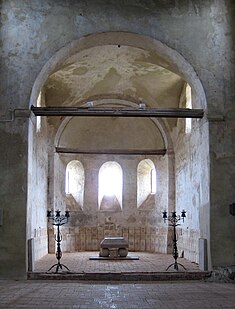 In the sacred architecture of the designated Choir , also choir room , presbytery or sanctuary called that place in churches , of the main altar surrounds and the sooner the clergy or the religious orders to celebrate the Divine Office was reserved. The clerics, who in cathedrals , basilicas or religious churches on the common liturgy involved are canons called. Originally, the choir was - according to its name - the room for the singers of the liturgy. The main altar room of the church is called capella maior (in the picture on the right this room is marked in yellow) and is to be distinguished from the choir.

The term “choir” can also refer to a demarcated area away from the main altar, for example as a nun's choir .

A choir can have one or more aisles in width and one or more yokes in depth . The terms inner choir , high choir and high choir refer to the inner choir area in the case of multi-aisle choir buildings, as a distinction from the side aisles and the possibly existing choir ambulatory . The ambulatory does not belong to the choir in the narrower sense, since it was not reserved for the clergy. But there is also an expanded definition of the term choir, which includes the entire wing of the building containing the main altar and is sometimes used in the architectural field. The narrower definition is used below.

In long buildings, the choir is usually located at the eastern end of the nave . However, there are numerous exceptions where the choir points in other directions or where a church has two opposite choirs (a so-called double choir system ). At Kreuzkirchen , the choir forms one of the axes of the cross alongside the transept and nave .

The choir consists of a rectangular chorus house (with square base and square choir called) and the chorus circuit . If the end of the choir is semicircular or polygonal , it is also called the apse . The end of the choir can be limited by a wall or (typically in the case of an ambulatory) by a number of columns. There are specific names for certain types of choir closure. An apse-free choir with a straight choir closure (also known as a flat or flat choir closure) is called a rectangular or box choir . The apex of the apse and the ambulatory is choir peak called.

Between the choir and the nave, or between the choir and the crossing , there may be a choir arch that marks the beginning of the choir. Choir screens or a rood screen can serve to separate the choir from the rest of the church . The area reserved for the clergy sometimes extended beyond the actual choir to the crossing or even to the nave. Therefore, a distinction is sometimes made between the architectural choir (the east axis of the church) and the liturgical choir (the entire clerical area). For a more precise differentiation, the area in which the choir stalls are located, as a chorus in the narrower sense, can be distinguished from the presbytery or sanctuary , the altar area with the seats of the priests celebrating mass.

The floor level of the choir can be raised compared to the rest of the church. In early Christian times , the choir was designed without any particular architectural form and was only divided by barriers within the church. It later emerged as an independent part of the building and was often raised above a crypt - especially in the Romanesque period . In the Romanesque and Gothic periods , choirs with ambulatory and chapels were built. The richest form of this form of choir can be found in the cathedrals of France .

Occasionally it happens that the axial alignment of the choir deviates slightly from that of the main nave, which is hardly or not at all recognizable in the construction. In these cases, it is often said that this bend in the axis is a symbol of the head of the dying Christ on the cross, bowed to one side. There are no historical sources for this factually untenable theory, nor did medieval people read floor plans; Rather, the reasons for such deviations are historical or structural reasons.

A choir is usually located on the sides of the choir. While the main altar traditionally stands as a high altar at the east end of the choir at the front of the apse, in modern churches it can also be found free-standing as a people's altar in the west of the choir, on the side facing the believers.

The village church floor plan type of the choir square church is known from the Romanesque period . It consists of a single nave and a recessed choir square, sometimes with a tower, but never with an apse. Its characteristic is the straight end of the choir.

In Cistercian churches and the English Gothic (e.g. Salisbury Cathedral ) the straight choir closure was preferred. The Brandenburg Cistercian churches end either with a semicircular apse ( Monastery Zinna and Monastery Lehnin ) or polygonal ( Monastery Chorin ). It is more the Franciscan monasteries that end with a straight choir closure (e.g. Prenzlau and Angermünde ). In northern England, the choir often ends with an east facade (see Lincoln Cathedral ). In the Cistercian churches, the choir is separated into a monk's choir , also known as the men's choir , and the lay brothers choir to the west .

The angular (polygonal) choir closings can be assigned to the Gothic . They are named according to the number of segment parts (e.g. as a 5/8 end ). A prime example of polygonal choirs in the Rhineland can be found in the collegiate church of St. Martin and St. Severus in Münstermaifeld .

Coro and Trascoro the Cathedral of Toledo

In the cathedrals and collegiate churches in southern Spain , for architectural reasons, as they were often built on the site of former mosques , the choir stalls were relocated to the center of the nave and initially to the side and later to the west through walls or through richly decorated with figures and ornaments an artfully forged grille delimited. This area is called the Coro . The coro contains the choir stalls, but not the altar. It is therefore not a choir in the architectural sense, but in the sense of its function as a separate area for the clergy. In a later phase its west wall was closed by a richly decorated and often provided with another altar front side, this is called Trascoro .

In ancient basilicas (e.g. in Leptis Magna and in Volubilis ) there were apses on both narrow sides. Since the Carolingian period and the European Romanesque there have been churches with a double choir with an east and a west choir. Examples are the Mainz Cathedral , the Worms Cathedral , the Trier Cathedral , the Bamberg Cathedral , St. Michael and St. Godehard in Hildesheim, the Naumburg Cathedral and the Bonn Minster ; but also in other areas of Europe (e.g. Nevers Cathedral ) there are isolated examples. The meaning is not clearly clarified. In the west choir of Naumburg Cathedral, for example, the secular founders of the church are depicted. The west choir could be used to develop its own liturgy. On the other hand, the formation of a west choir could be based on the example of Alt-St. Peter in Rome , where for topographical reasons the main altar stood in the west. A separate west choir was therefore able to express the special importance of a church and its ties to Rome.

A distinction is also made between the choir shapes that result from the relationship to the rest of the church and its extensions: