Nave of a basilica 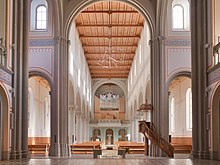 Nave and organ of the town church Glarus , Switzerland

As long house the elongated main part of a traditional Church structure in the Christian West referred to comprising one or more aisles and is often erroneously identified with the central nave the Kirchgemeinde in service receives. In some cases, the last yokes of the nave are used to set up choir stalls for the canons , as in the church of the Heiligenkreuz Abbey .

The nave is usually on the ground plan of an elongated rectangle to which either no further or three or five ships are attached. If there are several aisles , a wider, central nave is flanked on both sides and over its entire length by one or two narrower aisles. The aisles of the same width and, in some cases, asymmetrical arrangements, such as the church of St-Nazaire de Corme-Royal , are known. The ships are separated from one another by partitions.

In the longitudinal direction, a nave is usually divided into several mostly equally wide yokes over the entire width including the aisles . Arcade openings open in the partition walls between the naves , which are separated from one another by pillars or wall sections. Often the inner yoke structure is transferred from the outside to the lateral outer walls of the ships, for example through the window openings and wall or buttresses . The consecutive numbering of the yokes often begins on the west side of the nave with yoke one and ends before the crossing or the choir with the highest number of yokes, such as yoke five.

A pseudo-basilical elevation , on the other hand, arises if this difference in height is not sufficient for the installation of cliffs. Then the ships are housed under a shared gable roof.

A hall church has a multi-nave nave with no or only slight differences in height between the ships.

A single-nave nave covered by a gable roof is also called a hall church .

Longhouses from the early Middle Ages (early 11th century and earlier) initially managed without stone vaults and were covered by roof trusses that were open at the bottom , as was the case with St-André (Saint-André-de-Bâgé) . They had horizontal wooden beam ceilings that were covered with wooden formwork or closed on the underside. These constructions limited the possible widths of the ships considerably. Later stone vaults , such as barrel vaults , groin vaults , domed vaults , ribbed vaults and others, replaced the early medieval wooden beam ceilings.

The western facade of the nave and the portal recessed in it were often given a special artistic design in the Middle Ages, such as the Abbaye aux Dames Saintes . If, instead of this facade, the church has a portal porch or a westwork with a tower or towers, each with a narthex on the ground floor, the nave begins only behind these parts of the building with the nave west wall and the portal located therein. 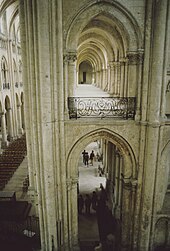 Real gallery above the aisle of Noyon Cathedral , 13th century

The nave extends from there over all yokes to the western transept wall and the crossing that opens into it . If the church lacks a transept, the nave extends up to the head of the choir .

It is not uncommon for the aisles of a nave to be built on two floors, especially in pilgrim churches, such as in St-Étienne de Nevers . The upper floor is called a gallery or grandstand; these open in each yoke to the central nave with triforias or biforias, also called triple or twin markings, but also with individual arcades. Real galleries were mostly offered as additional usable space for pilgrims to stay, the number of which increased sharply at the beginning of the 12th century, especially on the Way of St. James to Santiago de Compostela . “False galleries” that were not suitable for use, for example because of insufficient headroom, are less common. They only had constructive tasks together with their vaults as continuous buttresses or for maintenance purposes. Usually there were no freely accessible stairs leading up to them.

“False galleries”, such as those in Notre-Dame de Châtel-Montagne or St-Étienne de Vignory , where triforias or biforias simulate the galleries, are extremely rare . In any case, the ceilings that would be required for galleries are missing in the aisles.