A monopitch roof is a roof shape made up of just one inclined roof surface. The lower edge forms the eaves , the upper edge the roof ridge . The wall on the ridge is called the Hohe Wand. The usual construction is a purlin roof sloping on one side . The pitch of monopitch roofs is usually low.

In the history of European architecture, monopitch roofs are usually found over attached building parts, for example over bay windows , extensions or side aisles of basilicas. As the main roof of a building, however, they are rarely found in historical architecture.

Since industrialization, monopitch roofs have been used primarily for the roofing of garages, production and storage facilities, or outbuildings. From the middle of the 20th century, the monopitch roof is also used more often as the main roof for residential buildings or churches in order to set an architectural accent. In residential buildings, the living space under the roof can be used as a full storey thanks to a slightly inclined monopitch roof . The roof shape, which is easy to construct, is inexpensive to erect. The orientation of a monopitch roof designed as the main roof is traditionally directed towards the weather side (northwest) in order to keep out wind, rain and snow. Monopitch roofs that were designed together with a solar hot water system or photovoltaic system , on the other hand, are oriented as far as possible to the sunny side. A slope of 32 ° is ideal for fixed photovoltaic modules. In summer the roof offers good shade.

In addition to roof tiles and slate , monopitch roofs can be covered with roofing felt or sheet metal. In the case of building-integrated photovoltaics (GiPV), the photovoltaic modules also form the actual roof cover or roof skin.

In contrast to other roof shapes, the pent roof has reliable water drainage in the rain thanks to its construction and roof pitch. As a rule, this is accompanied by an automatic self-cleaning function of the roof shingles. 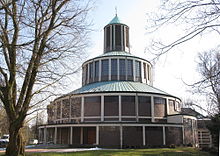 Ring-pent roofs of the Resurrection Church in Essen . A conical roof forms the end.

This roof shape is a monopitch roof with a circular floor plan. This type of roof bears some resemblance to a conical roof , but only forms a truncated cone . It has neither a gable or verges another first . In addition to the round shape, this roof is characterized by two roof rings. A tower wall ring runs between the two roof rings. Ring-pitch roofs are found mainly in central buildings with a circular floor plan, for example in round towers . They rarely form the main roof, but mostly cover a protruding component or a recess. This roof shape is mainly used for representative and sacred buildings .