The title of this article is ambiguous. Further meanings are listed under Gable (disambiguation) .

Designations on the roof

The gable is the part of the wall of a building that is adjacent to the roof edges or roof overhangs that are higher than the eaves or protrudes beyond the roof (as a false, shield or free gable) . The gable-side facade of a building is also called the gable wall . It is often less wide than the long sides of the building and is then also referred to as the front side . The line of intersection between the gable and the roof or the roof overhang on the gable side is called the verge .

The word gable has been used in German since the 10th century (ahd. Gibil , mhd. Gibel ). The exact origin is considered unsecured. Connections with " head " (as top, head), as well as with " fork " (as tip, fork) are assumed.

The gable is one of the oldest and most important elements of European architecture.

An ornamental gable is understood to mean not only the decorated, decorated gable of a building, but also the reduced ornamental shape of a gable. Portal, door or window gables describe the motif of a gable that is used to crown these components. In the case of a protruding component, this is also referred to as a suspicion . In modern architecture , the gable lost this decorative meaning.

The shape of the gable depends on the shape and construction of the roof. The classic gable triangle is the result of the frequent shape of the gable roof . In a hipped a trapezoidal area is created while a building is equipped with a hipped gable no. According to the roof pitch (steep / pointed or flat) the terms pointed gable and flat gable also exist. An articulated gable adapts to the shape of the roof with several angles. With a barrel roof , round or segmented gables can be created.

The false gables of the Saint-Martin church in Le Bernard , Vendée , are significantly larger than the gable roof behind.

If the shape of the gable does not refer to the shape or inclination of the roof, it is referred to as a front blind or false gable . In most simple roof constructions, the gable wall is surmounted by the roof surface and the gable follows the contour of the roof. If the gable is in front of the roof surface, one speaks of a free gable or shield gable . The roof connects from behind to the gable, which is higher than the roof and can be given its own shape. The gable edges of historic, representative buildings were also decorated with architectural sculptures. If the gable is significantly larger than the roof behind it, it is also referred to as a sham gable.

These gable forms and designs were taken up again in the 19th century, in the architecture of historicism . Before that, they were used not only in architecture, but also in the design of furniture and other everyday objects. 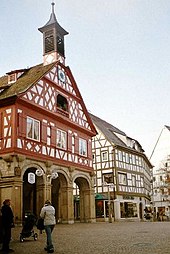 Gable rider on the historic town hall in Waiblingen

In ancient architecture, especially in temple construction, the tympanum is the triangular gable surface, which was emphasized by its size and frontality and provided with figurative or ornamental decoration. Gable field is a Germanization of tympanum, but also generally designates a gable triangle, especially if it is framed by cornices and sculptured.

The gable cornice is a cornice that accompanies the sloping gable leg ( verge ). The term oblique geison is also used in connection with ancient architecture .

The top of the gable , as the highest point of a gable, was particularly emphasized and designed.

The gable ear is a spike-like ornament on gable and tower tops, which was made from iron or baked clay in the Middle Ages and during the Renaissance.

The gable flower is a name for a stylized flower, which, often associated with figures, badges and symbols, was used to crown gables and roof ridges, for example in the form of a finial .

The gable turret is a roof turret, a roof structure often as a small tower that sits on the gable. It is considered a feature of urban secular buildings, so it can be found, for example, in historic town halls.

The gable spit is in timber construction in Switzerland a highly guided on the gable addition wooden stand. In Westphalia, and there in particular in the Ravensberger Land , the gable spike or gable post or ridge post is referred to as a geck post .

The gable turret can mean an acroterion , an ancient architectural element to crown gables, or a replica of it in a later epoch.

The gable arch is a name for a pointed arch with straight arch legs, it occurs in Romanesque and Anglo-Saxon ornamentation.

The gable bench is a rare old name for Wimperg , a Gothic ornamental gable.

The gable is usually on the narrow side of a building. Since a layer of beams as the inner storey ceiling is normally stretched over the narrower distance, its beams are often parallel to the gable. The gable beam (or local beam) is the beam that is attached directly next to the gable (masonry). A so-called gable anchor connects a gable wall with a layer of beams. The aim is to anchor and stiffen the masonry. This technology can be considered historical, today reinforced concrete components are usually used for it. In the 19th and early 20th centuries, however, the anchoring of masonry in the wooden beam ceilings of the storeys with the help of metal anchors was still the common method.

Gable rafters are called the outermost rafters of the roof on a roof gable . Another name is gable girder. The gable column is the column - as a support - of a roof truss that supports the gable and carries the load downwards. A gable bundle is a combination of rafters and collar beams , either as a (lined) gable surface or directly behind a solid gable (made of masonry) as part of the roof truss. The gable threshold is the threshold of a gable container, in the case of half-timbered houses the threshold of the entire gable wall can also be meant.

Gable-front refers to the orientation of a building in relation to an opening street or a square. With gable-independent construction, the gable side of a building is parallel to the street, while the roof ridge is perpendicular to it. A building oriented in this way is also known as a gable house. In this context, a gable roof is a gable roof, the gable of which is part of the front of the building. Gable-independent construction is typical of German-language street scenes from the Gothic and Renaissance periods . The opposite term too gable-independent in architecture and urban planning is eaves.

A bell gable is a gable structure with one or more openings in which bells hang. The bell gable itself is often closed with a triangular gable. It can be found in small churches or chapels, especially in the Mediterranean region. Special forms are the three-part clochers trinitaires on the churches in the Basque Pays de Soule and the almost castle-like rectangular bell gables (French: clochers mur ) in the Toulouse area .

As early as the Middle Ages, many Romanesque church buildings in the south and south-west of France (especially in the Charente ) received a - often unadorned - rectangular gable, which indicated the real or symbolic readiness of the church and the residents of the respective locality in the run-up to the Hundred Years War .