The Hérault department [ eʀo ] ( . Okz : Erau eʀau ) is the French department with the atomic number 34. It is in the south of the country in the region Okzitanien and was named after the river Hérault named. The capital is Montpellier .

The Hérault department stretches from the Massif Central in the north to the Mediterranean Sea in the south, which forms an 87-kilometer coastline there. In the northeast, the Vidourle river divides the Hérault and Gard departments . The river Hérault flows through the department coming from the north ( Ganges ) to the confluence with the Mediterranean at Agde . The second major river is the Orb . The Canal du Midi starts here in the east.

The department was formed on March 4, 1790 from part of the Languedoc province .

From 1960 to 2015 it belonged to the Languedoc-Roussillon region , which in 2016 became part of the Occitania region.

Description : In silver, a red compass with a gold Tolosan cross . 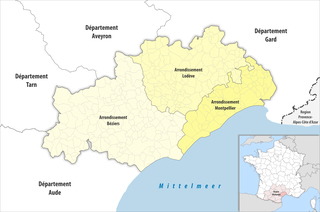 Communes and arrondissements in the Hérault department

With the exception of the mountainous north, in which mainly sheep is farmed, wine is mainly grown in the department. The cultivation areas Coteaux du Languedoc , Faugères , Saint-Chinian and the Muscat de Frontignan deserve special mention . All of the named growing areas have the status of an Appellation d'Origine Contrôlée (AOC).

On the coast there are small fishing ports and the city of Sète , the first fishing port and second trading port on the Mediterranean , as well as numerous tourist stations such as La Grande-Motte , Palavas-les-Flots or Le Cap d'Agde .

The University of Montpellier is best known for its medical faculty (founded in 1221). 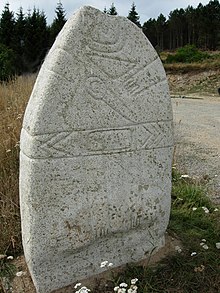 Observation station: Sète, on the slope of Mont Saint-Clair , at an altitude of 80 meters, 350 meters from the sea