The Haute-Savoie department [ otsavwa ] ( German Haute Savoie and Haute-Savoie ) is the French department with the atomic number 74. It is in the east of the country in the region Auvergne Rhône-Alpes and after the landscape Savoy named. The capital of the department is Annecy . 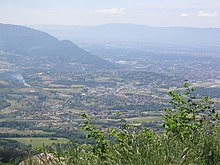 In the partially high-alpine area of ​​the department, in addition to Lake Geneva (French part, 190 km²), Lake Annecy , the Mont Blanc group in the southeast and the Chamonix valley are located . The most important rivers are the Rhone (border river in the west against the Ain department) and its tributaries Arve and Dranse .

Description: In blue, a silver tip that has just been inserted with the red shield and a continuous silver common cross for Savoy.

The Haute-Savoie has long been one of the poorest regions in France; Typical of the early 19th century were the children's chimney sweeps, who in Paris and other parts of France cruelly illustrated the poverty of the rural population in the region.

Savoy , annexed by France between 1792 and 1815 , was returned to the Kingdom of Sardinia-Piedmont at the Congress of Vienna . Switzerland was granted the right to occupy the northern Savoy provinces of Chablais and Faucigny in the event of war to protect Swiss neutrality .

The department was formed on June 15, 1860 after the Savoy trade from the old provinces of Genevois , Chablais and Faucigny , which formerly belonged to the Duchy of Savoy and were annexed to France when the Italian part of the duchy was dissolved in the newly founded Kingdom of Italy .

Communes and arrondissements in the Haute-Savoie department

The Haute-Savoie department is divided into four arrondissements :

The manufacture still forms a large part of the department's industry today. The Arve valley (Vallée de l'Arve, Vallée Verte) plays a historical role in watchmaking and the supply of parts to Geneva . Long turning plays an important role here.

In addition to industry, tourism is particularly important in the ski areas of the French Alps. With Megève , Chamonix , Morzine-Avoriaz , Flaine and La Clusaz, there are outstanding ski areas with convenient transport links to Geneva.

In addition to its function as a transport hub, Geneva also influences the economy in Haute-Savoie. Around 30,000 cross-border commuters (Frontaliers) live in Haute-Savoie and work in Geneva. In addition, there are the functionaries of international organizations ( UN , WHO , ICRC , ...) who are based in Geneva.

With the conclusion of the bilateral agreement on the free movement of persons between Switzerland and the European Union , a further expansion of the influence of Geneva into the Haute-Savoie is to be expected.

Several railway lines open up the department and connect it with the SNCF network in Ain and Savoie as well as with Switzerland: