The department Alpes-Maritimes [ ALP maʀitim ] ( Italian Maritime Alps ) is the French department with the atomic number 06. It is in the southeast of the country in the region Provence-Alpes-Cote d'Azur and is in accordance with the Maritime Alps named that here the Form border mountains to Italy .

The department is part of Provence and extends from the Côte d'Azur to the alpine hinterland. It borders the Var department to the west, the Alpes-de-Haute-Provence department to the northwest, Italy ( Piedmont and Liguria ) to the east and north and the Mediterranean Sea to the south , where it encloses the Principality of Monaco . The capital is Nice , other well-known cities are Cannes and Grasse .

Description: In silver on a black three-mountain with blue waves, a red eagle with a crown of the same color .

As early as 7 BC, the Romans had A province of Alpes Maritimae was founded. Their capital was Cemenelum , today Cimiez, a district of Nice . During its greatest expansion at the end of the 3rd century, the province also included Digne and Briançon , and its capital had been moved to Embrun .

An Alpes-Maritimes department with the capital Nice existed in France from 1793 to 1815. Its borders differed from those of today's department, especially since it included Monaco and Sanremo .

In 1947 the territory of the Alpes-Maritimes department was expanded to include the municipalities of Tende and La Brigue , whose residents voted in a referendum in the same year to join France and as a result Italy had to cede the two villages.

The original Provencal (or Occitan) place names and other geographical names (which were Italianized while belonging to the House of Savoy ) were largely francophone when the county of Nice was annexed to France - unlike in Corsica municipalities mentioned in the last section. The municipality of Isola could be an exception . In addition to the French Nice , the Italian name is also known for Nice , but not in use locally. In addition, the districts of Monte-Carlo , Larvotto , and Les Moneghetti in the Principality of Monaco, which is surrounded by the department , have been preserved in their Italian spelling.

Due to the history of the county of Nice, which was administratively separated from Provence between 1388 and 1860, a dialect of the Provencal or Occitan language is still spoken in Nice and the surrounding area , which has an old Provencal form and is called Nissart . In the northern, alpine parts of the department, Alpine Provençal ( Gavot ) and Brigasque are spoken, while Maritime Provençal can still be heard in the west . 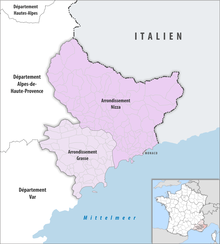 Communes and arrondissements in the Alpes-Maritimes department

The department is bordered in the north by the Maritime Alps with the southernmost three-thousand-meter peaks in the Alps ( Mont Clapier 3045 m and the Cime du Gélas 3143 m), in the east by the Ligurian Alps and in the west by the Provencal Pre-Alps. This offers excellent hiking opportunities in the Vallée du Verdon , Vallée de la Tinée , Vallée du Var , Vallée de l ' Estéron , Vallée du Cians, Vallée de la Vésubie and Vallée de la Roya . Several large French GR long-distance hiking trails , Sentiers de grande randonnée , run through the department ( GR 4 , GR 5 , GR 52 , GR 52A and the Via Alpina ) and in some cases also lead through the Mercantour National Park .

Places of interest in the department:

See also : List of Monuments historiques in the Alpes-Maritimes department 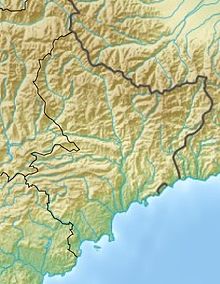 Departments in the region d'Azur Provence-Alpes-Cote