The Ardeche [ aʁdɛʃ ] (officially Département de l'Ardèche ) is the French department with the atomic number 07. It is in the southeast of France in the region Auvergne Rhône-Alpes and was named after the river Ardèche named, which rises in the west of the department , cuts through the southern part and flows into the Rhône , which forms the eastern border of the department, at Pont-Saint-Esprit ( Gard department ) .

The Ardèche department, which is part of the Massif Central, borders the Drôme , Vaucluse , Gard , Lozère , Haute-Loire , Loire and Isère departments . It lies at an altitude between approx. 120 m (Rhône Valley) and 1753 m ( Mont Mézenc ). Sufficient rain falls in the Ardèche area, but surface waters (rivers, streams, lakes) are rare due to the lime-rich subsoil, which made settlement in the region difficult for a long time, because deep well construction techniques were only mastered in Europe since the Middle Ages.

The department was established on March 4, 1790 and is almost congruent with the former county Vivarais (a subdivision of the province of Languedoc ).

The coat of arms of the department largely corresponds to the historical province of Vivarais: It shows in blue six rows sown golden lilies that of a golden board occupied and eight blue breastplate are surrounded.

Communes and arrondissements in the Ardèche department

Traditionally, agriculture (farming and animal husbandry) plays the most important role in the economic life of the residents; In the past, the basis of food was also the sweet chestnut , which was eaten roasted as an equivalent to the little-known potatoes or dried and processed into flour. Today their cultivation is intensified again.

The regional wine domination " Ardèche " has produced high quality wines since the last decades of the 20th century. The area under cultivation, which actually belongs to the Côtes du Rhône and Côtes du Vivarais wine-growing regions , is increasing continuously.

In the 18th and 19th centuries there were several silk mills in the region, but they could not keep up with imports from Asia in terms of quality and price. Since the second half of the 20th century, tourism in the form of renting holiday apartments ( gîtes ) has increasingly become an important economic factor.

In addition to a railway line on the right bank of the Rhône, there are two museum lines. The Chemin de Fer du Vivarais runs through the Doux valley between Tournon-sur-Rhône and Lamastre . There is also the tourist rail bus service Train touristique de l'Ardèche méridionale between Saint-Jean-le-Centenier and Vogüé . The western part of the department is connected to the national rail network via the Cevennes Railway in Villefort (Lozère) . The Ardèche department is the only department in mainland France that does not have a train station operated by the SNCF .

Due to its unique landscape and its flora and fauna, the Ardèche is a destination for nature-loving tourists and those looking for peace and quiet. 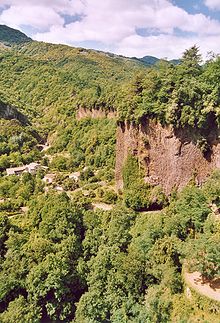 The Ardèche shows a nature that can only be found sporadically in Europe. Animals, especially insects, reptiles and birds find a perfect environment here. An area of ​​around 180,000 hectares is placed under special protection in the Monts d'Ardèche Regional Nature Park . The Ardèche department is divided into two parts. The northern part consists of a mountain landscape that reaches heights of up to 1700 m. The southern part is characterized by the Gorges de l'Ardèche ; the mountains and plateaus are here at a maximum height of 500 m.

Northern part of the Ardèche

This upper part has a harsh climate, that is, cool and windy in winter and hot in summer. Up here one lives mainly from cattle breeding and agriculture, which is why this part of the Ardèche is called the Butterland. You could compare it to a desert, but not endless sand, but endless grass. In contrast to the south of the Ardèche, there are very large pine forests here. The Loire also rises here . The landscape has a topography sloping towards the south, which is still up to 1700 m high in the north, but only reaches heights of approx. 180 m in the south. Most of the small rivers run dry in summer; only the larger ones still have water.

Southern part of the Ardèche

In the southern part there is a mild climate with moderate winter and summer periods. Alternating with several weeks of drought, there can be short but violent thunderstorms that cause major floods. Therefore, in the south, wine, olives and fruits such as peach, cherries and so on are grown. Furthermore, the south is characterized by abrupt valleys with steep, wooded slopes. There are no fir forests here, but large and many oak forests with wild boars . There are no high mountains, just flat, wooded hills. Large and small stalactite caves are extremely numerous.

Central part of the Ardèche

The largest silk production in Europe was in this region until the end of the First World War , when imported silk from China increasingly displaced French silk from the markets. Even so, there are still very many mulberry trees in this area today . Many chestnut plantations, whether well-tended or wild, cover the hills; the Ardèche region is the main producer of around 50% of sweet chestnuts in France.

Ruins of the Mazan Cistercian Abbey

Launched in 1790, the department of Ardèche covers about the same area as the historical province of Vivarais . The most important cultural attraction in the region is the Chauvet Cave near Vallon-Pont-d'Arc, which was recognized by UNESCO as a World Heritage Site in 2014 . As several dolmens and menhirs prove, the area of ​​the southern Ardèche was settled as early as the Neolithic . Roman and early medieval finds, on the other hand, are almost unknown, although the nearby Rhône Valley was one of the most important settlements and traffic routes of the time. The region only experienced significant cultural development in the high Middle Ages; this is indicated by the numerous Romanesque churches and castles. A cultural advancement towards the style epochs of Gothic , Renaissance or Baroque took place only in extremely rare cases (e.g. at the Notre-Dame-des-Pommiers church in Largentière ). 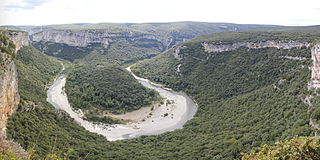 The rock gate at Vallon-Pont-d'Arc is the symbol of the Ardèche Valley.