The Seine-et-Marne [ sɛnemaʀn ] is the French department with the atomic number 77. It is in the Region Ile-de-France east of Paris and on the rivers Seine and Marne named.

The most important rivers are the eponymous Marne and Seine, which cross the department in the north and south in a westerly direction, and the Yonne , which flows into the Seine from the south-east in Montereau-Fault-Yonne .

In the south-west of the department lies the Fontainebleau Forest and the Gâtinais Français Regional Nature Park, a large contiguous nature reserve.

The most populous communes in the Seine-et-Marne department are:

The Seine-et-Marne department is divided into 5 arrondissements , 23 cantons and 510 communes : 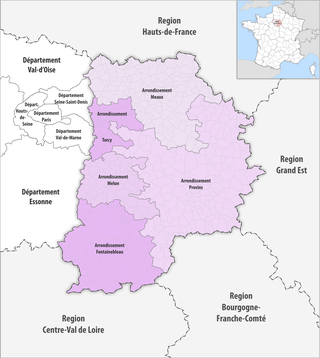 Communes and arrondissements in the Seine-et-Marne department

The German war cemetery of Solers is located 50 km southeast of Paris and on the outskirts of Solers . 2,228 German soldiers from World War II are buried here.

Department in the region Ile-de-France