The department Ille-et-Vilaine [ ileviˈlɛn ] ( Breton Il-ha-Gwilen ) is the French department with the order number 35. It is located in the northwest of the country in the region of Brittany and is after the rivers Ille (Breton: Il ) and Vilaine (Breton: Gwilen ) named.

Ille-et-Vilaine is the easternmost department in Brittany.

The department was formed at the time of the French Revolution on March 4, 1790 on the basis of the law of December 22, 1789 on the division of France into departments from the north-eastern part of the old province of Brittany .

In the summer of 1940 it was occupied by troops of the Wehrmacht , like all of northern France , after they had won the western campaign within a few weeks and occupied Paris. In the summer of 1944, Allied troops liberated the area: after landing in Normandy , they broke out of their bridgehead and began the battle for Brittany on August 1, 1944 .

The most populous municipalities in the Ille-et-Vilaine department are:

Other important places are Dinard , Dinan , Dol-de-Bretagne and Redon . 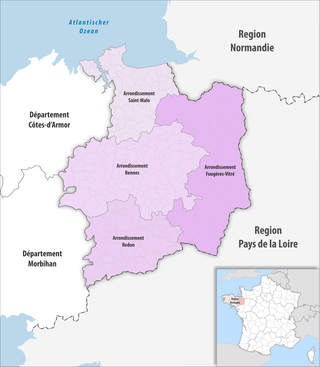 Communes and arrondissements in the Ille-et-Vilaine department

The Ille-et-Vilaine department is divided into 4 arrondissements , 27 cantons and 333 communes :

Departments in the Region Bretagne