The Vendée [ vɑde ] is the French department with the atomic number 85. It is in the west of the country in the Region Pays de la Loire and is named after the river Vendée named.

The Vendée department borders the Loire-Atlantique , Maine-et-Loire , Deux-Sèvres and Charente-Maritime departments as well as the Atlantic Ocean .

Description: In silver, the red sign of the uprising Vendée surrounded by 12 times blue and red gestückten board with the golden lily and a golden padlock changing.

The department was formed on March 4, 1790 from part of the province of Poitou and largely corresponds to the Bas-Poitou (i.e. Lower Poitou ).

In March 1793, the Vendée was the starting point for an uprising against the French Revolution . Under the sign of heart and cross , the rural population fought against the forced recruitment of the Parisian revolutionary parliament. The peasants loyal to the Church and the King in western France, in Brittany and in the Vendée, the area south of the Loire estuary, had already mostly sided with the oath-refusing priests in the dispute over the civil constitution of the clergy. The in their eyes monstrous execution of the king on January 21, 1793 intensified their opposition to the revolution. An armed uprising broke out when the convention ordered a mass recruitment campaign due to the precarious war situation against the absolutist princes of Europe. This measure hit the farmers particularly hard in view of the harvest and field work. An initially victorious "Catholic and Royal Army" formed against these levies under the leadership of young aristocrats. It was only when the battle-hardened troops from the east of France intervened in the fighting that the Catholic-Royal army could be defeated. The government troops carried out a brutal campaign of revenge even after this victory. They burned entire villages and murdered their residents.

The department has belonged to the Pays de la Loire region since 1960 .

The most populous communes in the Vendée are:

The Vendée department is divided into 3 arrondissements and 258 communes : 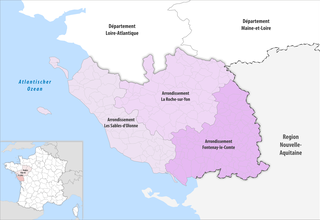 Communes and arrondissements in the Vendée department

The most important branch of the economy is tourism , especially on the 200 km long Atlantic coast.