The Haute-Garonne [ otgaˈʀɔn ] department is the French department with serial number 31. It is located in the south of the country in the Occitania region - before 2016 Midi-Pyrénées - on the border with Spain and was named after the upper reaches of the Garonne River.

The department arose on March 4, 1790 from parts of the former French province of Languedoc and some territories of Gascony , in particular the main parts of the county of Comminges and the vice-county of Nébouzan in the southwest. After the creation of the Tarn-et-Garonne department in 1808, some municipalities had to give it up to it.

The department is located in the Pyrenees of southern France and borders on Spain . Neighboring clockwise are the Hautes-Pyrénées , Gers , Tarn-et-Garonne , Tarn , Aude and Ariège departments .

Blazon : A golden Tolosan cross in red with a silver almond in the corners. 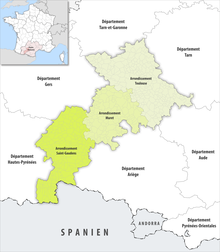 Communes and arrondissements in the Haute-Garonne department 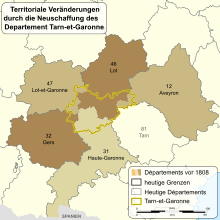 The Tarn-et-Garonne department was re-established in 1808