French Guiana , also French Guiana , French Guyane [ gɥiˌjan ], is an overseas department (with the serial number 973) and a region of France . French Guiana is located in the north of South America on the Atlantic Ocean between Brazil and Suriname at latitude 4 ° north and longitude 53 ° west .

French Guiana is a fully integrated part of the French state and therefore also part of the European Union , but not of the Schengen area . The euro is legal tender.

In contrast to this French department, the nearby independent state of Guyana always writes itself without the first "a". It should not be confused with the former French colony of French Guinea (Guinée française), today's Republic of Guinea .

The department covers an area of ​​around 83,534  km² and is almost as large as Austria . It has a 378 km long coastline on the Atlantic Ocean , a 730 km long border with Brazil and 510 km with Suriname . The border with Brazil is the longest border between France and another country.

The Oyapock River forms the border with Brazil

The area is part of the Guayan mountainous country , which extends over 1.5 million km² in the northeast of the South American continent. Due to its climatic isolation from the rainforest, this highland has an endemic flora and fauna.

The highest point is the Bellevue de l'Inini at 851 m above sea level. In the south of the country there is a small mountain range with a maximum elevation of 800 m, the Massif Tabulaire . The most important rivers from west to east are the Maroni , which forms the border with Suriname, the Sinnamary , the Approuague and the Oyapock , which is also the border with Brazil. On the position map shown here, the area of ​​French Guiana, which is disputed with Suriname in the south of the country, is added. 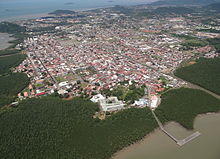 Aerial view of the main town of Cayenne

French Guiana has the largest contiguous forest area in France and the European Union. 90% of the country is covered with tropical rainforests . The vast majority of the population lives on the coast, where the largest cities are located. These are:

The climate is tropical . Throughout the year there are constant temperatures averaging around 28 ° C. The dry season is from August to December; the other months are the rainy season. The average relative humidity is between 80 and 90%. The coastal region benefits from the trade winds of the Atlantic and the coolness of the rainforest in the south and west. Due to the proximity to the equator and the prevailing air currents, unlike over the Caribbean Sea , the occurrence of tropical cyclones is practically impossible. 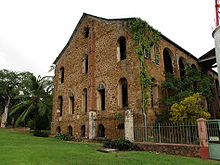 Christopher Columbus arrived on the Guiana coast as early as 1498 . But it wasn't until about a hundred years later that European emigrants settled there - initially Dutch and from 1604 French and English. As a reparation for Portugal, which was defeated in the Orange War , the French colony was enlarged in the Peace of Badajoz in 1801 by ceding an area from Portuguese Brazil to France.

In 1946, French Guiana became an integral part of France as an overseas department and thus received limited self-government . Since then, the department has had two members in the French National Assembly and in the Senate .

French Guiana became known for the "Archipelago of the Damned" on the Îles du Salut , a French penal colony that existed from 1852 to 1951. This also included Devil's Island . Up to 70,000 people from different social classes were imprisoned there.

In 1968 the Europeans built the Center Spatial Guyanais rocket launch site in Kourou, which is geographically favorable because it is close to the equator and which has been constantly expanded over the years. The success of the Ariane program and a clever corporate strategy by the operating company Arianespace contributed significantly to this.

The population is also growing due to immigration. Most of the immigrants come from nearby states such as Guyana, Suriname, Brazil, and Haiti. Significant immigration is also recorded from South Asia. On September 6, 1977, the first of 2,100 Hmong who had fled China and Laos arrived . They were settled in the villages of Cacao and Javouhey ( Mana municipality ). Thanks to their hard work, they achieve a certain level of prosperity within a few decades. They harvest up to 90% of the fruits and vegetables sold in the country.

Ethnically, the population is very mixed. The majority of the population is made up of the Creoles and Afroguians , whose ancestors were shipped as slaves from West Africa to French Guiana during the colonial days . The descendants of European immigrants make up 12% of the population. Other significant minorities are the indigenous natives with around 5–10%, and the Southeast Asians , mainly Laotians and Vietnamese from the former French colony of Indochina .

A special feature are the descendants of escaped African slaves, known as Marrons or Bushinengue , who have lived secluded in the forests of the Maroni River for centuries. There are four ethnic groups that make up the majority of the population along the Maroni: Alukus (or Bonis ), Ndyukas , Paramaccaner and the Saramaccaner . Most of the latter group lives in Suriname, but some fled to Guyana from the ruling military dictatorship during the civil war there in the 1980s. The escaped slaves found almost the same living conditions in the primeval forests as in their original home, the rainforests of Central and West Africa, from where they had previously been abducted. They were therefore able to continue their original way of life more or less unchanged on the new continent, even though their new home was thousands of kilometers away from their country of origin. They mostly live in subsistence farming by hunting and fishing, others work as gold washers or in tourism. They are significantly poorer than the average Guiana population and are severely underrepresented in political bodies.

According to a French census of December 31, 2007, 84.4% of the population are Christians , of which over 90% are Catholics. For Chinese universism to 3.6% profess. 3.3% are attributed to spiritism and 2.9% are agnostics . In addition, between a quarter and a half of the country's indigenous people hold fast to traditional religions ; the census gives 2.2% of the total population.

Like all other departments, French Guiana is also represented in the French legislature by representatives of the people and municipalities: it has two mandates each in the National Assembly and in the Senate.

All French laws apply in French Guiana. However, according to Article 73 of the French Constitution, local peculiarities can be taken into account.

French Guiana has been a department and a region of France since the decentralization laws of 1982. Guiana is divided into two arrondissements , one around Cayenne , the other with the sub-prefecture of Saint-Laurent-du-Maroni . The area is also divided into 19  cantons and 22  municipalities .

Every six years, citizens elect the Conseil général (for the département) with 19 members and the Conseil régional (for the region) with 31 members. Martin Jaeger is prefect (as of January 2017).

In a referendum initiated by the French state on 10 January 2010 on more autonomy for the département, with a turnout of 55 percent, 69.8 percent of the voters voted against. In another vote on January 24, 2010, a majority of 57.58% voted in favor of merging the department and region. However, the turnout was only 27.44%.

French Guiana is part of the European Union. Therefore, the borders with Suriname and Brazil are also the EU's external borders.

See also: List of Presidents of the Regional Council of French Guiana since 1983

There are approximately 920 officers of the French Gendarmerie at the Gendarmerie Command (COMGEND) of Guyana. Customs has around 200 employees.

The University of French Guiana offers 31 courses in 2 locations. It covers 5 areas of study, namely art, literature and languages, health sciences, science and technology, as well as law and economics.

The French army maintains a.o. in Rochambeau . an air force military base. A unit of the Foreign Legion , the 3rd Infantry Foreign Regiment (French 3 ° REI), is stationed in Kourou. Her primary tasks include securing the border and the spaceport in Kourou. Soldiers of the Foreign Legion came from there in March 2004 on a mission to Haiti . In Régina , about 70 km south of Cayenne, there is the "Jungle Fighting School " ( Center d'entraînement à la forêt équatoriale , CEFE) of the Foreign Legion, in which special units from other countries (e.g. KSK , Navy Seals ) also undergo short training be formed.

French Guiana is divided into two arrondissements and 22 parishes . Up until 2015, the cantons were organized as an additional level , which was abolished on January 1, 2016 and the 19 cantons in French Guiana were dissolved.

The ESA operates together with the French space agency CNES in Kourou the spaceport Guiana Space Center . There starts Arianespace , the launch vehicles of the type Ariane with communication satellites and other payloads , it also provides launch facilities for Soyuz and Vegaraketen . Due to the proximity to the equator , the rockets need less fuel when launched from here than from Europe in order to carry a payload to a certain orbit height.

The spaceport is the main pillar of French Guiana’s economy. In the meantime, the space site in Kourou has also become a tourist engine of the domestic economy .

The forestry is due to the tropical rainforest of the country an important industry. Agriculture is only practiced near the coast. The only other industries that are worth mentioning are shrimp fishing and gold mining .

The most important trading partners are metropolitan France , Trinidad and Tobago and Italy . The main exports are fish, rice and gold, with French Guiana being the most important import products. Machines and vehicles . The mercury used in the (mostly illegal) gold mining ends up in the water and is ingested by the fish. In the parts of the indigenous population who feed mainly on fish, this leads to disease symptoms similar to Minamata disease in Japan. French officials are increasingly taking action against the illegal prospectors by seizing them and deporting them to Brazil. However, the prospectors soon invade French-Guyanese territory again, as the rainforest is very difficult to control. In addition, the French military has little legal recourse to the smugglers and environmental criminals who work in mafia-like structures. The miners, who do the actual work and take on great health and legal risks, are usually in a suppressed, slave-like working relationship with their donos (Portuguese) in the background, who often do not shy away from violence. The price of gold, which has risen in recent years, has further exacerbated the problem.

In comparison with the gross domestic product of the EU, expressed in purchasing power standards, French Guiana achieved an index of 57.6 (EU-25: 100) (2003). This makes French Guiana the poorest region in France. However, the high rate of self-sufficiency, which is not taken into account when calculating GDP, must also be taken into account.

1  Mostly attributed to North and Central America in terms of cultural geography .