from Wikipedia, the free encyclopedia
This is the spotted version , flagged on July 5, 2020 . There is 1 pending change that has yet to be viewed.

The title of this article is ambiguous. Further meanings are listed under Auvergne (disambiguation) . 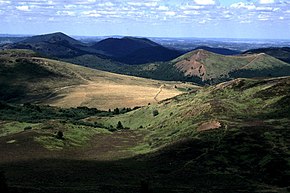 A large part of the Auvergne region belongs to the volcanic Central Massif with the Chaîne des Puys and Monts Dore volcanic chains . The highest mountains are the Puy de Sancy (1886 m) and the Plomb du Cantal (1852 m); the most famous volcanic cone is the Puy de Dôme (1465 m). Landscapes with a historically and / or geographically independent character are the Bourbonnais , Limagne , Livradois and Velay . Numerous rivers have their source in or near the green Auvergne - the best known are the Loire , which flows north and its tributary, the Allier and the Dordogne , which drains to the south-west .

Description: A red church flag in gold with a green border.

As that of Saint-Nectaire standing dolmens , but also prove other prehistoric finds (→ Web link), the Auvergne was roamed by prehistoric man. The Celts , Romans , Visigoths and Franks left hardly any archaeological traces, although their presence has been handed down through written documents.

The Auvergne is one of the historic provinces of France. The name of the region is derived from the Arverni , a Gauls tribe who settled in this area at the time of the Roman conquest . In late antiquity , the Auvergne was conquered by the Visigoths under Eurich in the 1970s (see also Sidonius Apollinaris ) and became part of the Franconian Empire at the beginning of the 6th century .

During the Middle Ages, four domains emerged in the Auvergne. The county of Auvergne initially comprised the entire province, but during the 12th century the Bishop of Clermont established an independent rule in Clermont-Ferrand . Around 1155 the so-called Delfinat separated from Auvergne around the Monts Dore . In 1213 the Auvergne was occupied by royal troops, the count only received a small part of his former property in the east of the province. The larger remainder with the main town Riom remained in the royal possession ( terre royale d'Auvergne ), with which the Prince Alfons of Poitiers was endowed. After his death, this land came back to the crown until King John II formed the Duchy of Auvergne from it in 1360 for one of his sons.

In 1651 the county came to Frédéric-Maurice de La Tour d'Auvergne, duc de Bouillon , who received the Auvergne and Albret in exchange for the strategically much more important Sedan and Raucourt . His descendants were deposed during the French Revolution . In 1790 the historical province was divided into the current departments. Haute-Loire and Allier also encompass parts of the historic provinces of Bourbonnais , Lyonnais and Languedoc .

With the establishment of the regions (1960), the Auvergne was rebuilt. In 1972 the region received the status of an établissement public under the direction of a regional prefect. The decentralization laws of 1982 gave the regions the status of collectivités territoriales ( territorial authorities ), which until then had only been enjoyed by the municipalities and the départements. In 1986 the regional councils were directly elected for the first time. Since then, the region's powers vis-à-vis the central government in Paris have been gradually expanded.

On January 1, 2016, the Auvergne region merged with the neighboring Rhône-Alpes region to form a new region with the provisional name Auvergne-Rhône-Alpes .

The landscapes of the Auvergne

The most populous cities in Auvergne are:

The language of the province is Auvergnatisch , a dialect of Occitan language , which is spoken in the three departments of Auvergne (Cantal, Haute-Loire and Puy-de-Dôme).

The Auvergne region is divided into four departments:

For centuries, large parts of the rural population lived on farming and livestock farming (cattle, sheep, goats) on a self-sufficient basis ; Salers and Aubrac cattle are two typical cattle breeds in the Massif Central.

Today everyone is talking about the region because of the cheese produced here (e.g. Bleu d'Auvergne , Cantal , Fourme d'Ambert , Salers and Saint-Nectaire ) , the wine (e.g. Saint-Pourçain and Côtes d ' Auvergne ) as well as the export of mineral water (e.g. Volvic ). Knife makers from Laguiole and Thiers are also known ; the pocket knives of the same name are manufactured there by the maîtres couteliers in elaborate manual work and sold all over the world. Industry plays a marginal role, but the Michelin plants in Clermont-Ferrand are among the world's leading tire manufacturers . There are numerous hydropower plants , mainly on the Tarn , the Dordogne , the Cère , the Los and the Truyère . The generation of wind energy has so far hardly played a role - probably for tourist reasons; However, in the spring of 2015, a system with seven wind turbines went into operation in the municipality of Saint-Nicolas-des-Biefs on the eastern edge of the Auvergne.

The Auvergne is a popular tourist destination - especially the largely untouched landscapes and the historically significant Romanesque churches (e.g. in Saint-Nectaire , Issoire , Orcival, etc.) attract many tourists. Because of its volcanic origin and many springs, there are also some health resorts in the Auvergne (especially Vichy ). 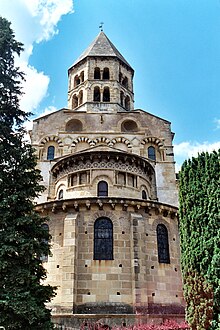 Church of Saint-Saturnin with the Massif barlong and stone incrustations