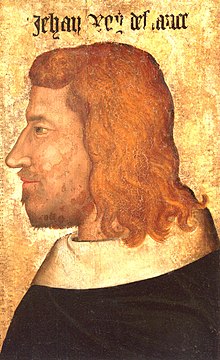 Johann II, called the Good. Portrait of an unknown master around 1350, exhibited in the Louvre in Paris 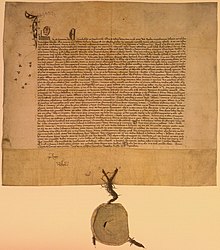 Johann II was the second son of Philip VI. of France and his first wife Joan of Burgundy . He came from the House of Valois and was later the second representative of his dynasty on the throne.

He entered his reign after the death of his father in 1350, who had previously repeatedly waged war with England , with less and less success . Under Johann in 1355, after the armistice had expired, the war flared up again. Edward, the Black Prince , the "Black Prince", landed in the Garonne area, devastated the Auvergne , the Limousin and Poitou , but tried the approach of the French army, after Bordeaux withdraw. At Poitiers , however, the retreat of his small army was cut off. Hardly pressed, he offered Johann a seven-year armistice in exchange for free withdrawal; Johann, however, sure of victory, turned down any amicable settlement, and so the battle of Maupertuis took place on September 19, 1356 , in which Johann lost the war and his freedom.

It was not until the Peace of Brétigny in 1360 that he released him from imprisonment after he had promised to cede several provinces in addition to 3 million pieces of gold ( Êcus , also Êcus d'or ). Since his son, the Duke of Anjou , who had been left hostage in England, fled from there before the ransom was paid, Johann returned to London in early 1364 and was taken prisoner. He was welcomed brilliantly there as a royal guest, but died on April 8 of this year. His eldest son from his first marriage was his successor as Charles V.

The Secondogeniture of the House of Valois , the House of Burgundy , donated by John in 1363 , also turned out to be the ruin of France, so that no more heir to the throne was named John after him.

He died in London on April 8, 1364 and was buried in the tomb of the French kings, the Basilica of Saint-Denis . When the royal tombs of Saint-Denis were sacked during the French Revolution , his tomb was opened and looted on October 25, 1793, and his remains were buried in a mass grave outside the church. 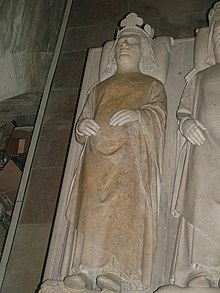 On July 23, 1332, he married Jutta von Luxemburg , whose mother came from the Bohemian ruling house. The list of their descendants is extensive:

Jutta died of the plague in 1349, as did Johanna's mother Johanna.

On February 19, 1350 he married Johanna von Boulogne , who made him the father of the following children: