This article is about the French younger house of Burgundy. For other dynasties see Burgundy , for the partnership house see CRB House Burgundy .

The coat of arms of the dukes of Philip the Good and Charles the Bold of Burgundy from Scheibler's book of arms.

The (younger) House of Burgundy ( French la maison de Valois-Bourgogne ) was a branch of the French royal family Valois from the Capetian dynasty , which in the late Middle Ages was able to unite numerous territories on both sides of the Franco-German border to form a largely closed complex of lands under his rule. At times the dukes of Burgundy were among the most powerful princes in Europe. Although they said for the western part of its dominions King of France and for the Eastern to the Holy Roman Emperor lehnspflichtig were, they were de facto as independent princes. The attempt to establish an independent kingdom failed with the death of Charles the Bold in 1477, the last Duke of Burgundy from the House of Valois, and with his heir Maria the house went out in 1482 and was inherited by the House of Habsburg through their marriage . 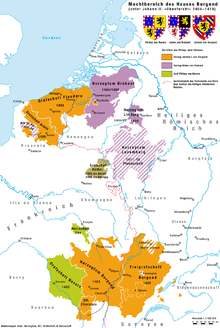 The three branches of the House of Burgundy after the death of Philip the Bold in 1404: Burgundy, Brabant and Nevers

In 1363 Philip the Bold was enfeoffed with Burgundy by his father, the French King John the Good . He acquired the Free County of Burgundy and Flanders through inheritance and purchase . His grandson Philip the Good was also able to take over the legacy of the Wittelsbachers on the Lower Rhine ( Holland , the associated Hainaut and Zeeland ), and the legacy of the Luxembourgers who died out in 1438 ( Luxembourg , Limburg and above all Brabant ). After Philip joined the English party in the French throne turmoil (→ Hundred Years War ) in 1420 with the Treaty of Troyes , he was able to pursue an independent great power policy: his father Johann Ohnefurcht , as head of the Bourguignons, had tried in vain to gain government over France and failed because of the resistance of the Armagnacs . With the Treaty of Arras (1435) Philip also acquired Picardy , and Philip's personal feudal dependency of France was ended, which brought Burgundy sovereignty initially for a period and European status to the duke. The conflict with the Valois persisted despite the formal reconciliation with King Charles VII .

His son Charles the Bold was seen by his contemporaries as the ideal of the knight and was also constantly involved in fights. With the pledging of Front Austria by Sigmund von Austria in 1469 and the acquisition of the Gelderland in 1473, the country complex finally reached its greatest extent. With Emperor Friedrich III. he negotiated about the elevation to king - Friedrich demanded the hand of Karl's daughter Maria for his son Maximilian as the price . After the unsuccessful siege of Neuss in 1474, Karl finally consented (however, because of his early death, the house of Habsburg benefited from it ).

Charlemagne's next goal was the unification of the separate Burgundian Upper Lands (Burgundy proper and the Free County) with the Lower Lands , which gave today's Netherlands its name. In 1475 he attempted to create a land connection between these parts by conquering Lorraine - but with this he also came into conflict with the Confederates (→ Burgundian Wars ). In 1477 Karl fell in the battle of Nancy . With him, this family died out as suddenly as it had risen before - a fate that is reminiscent of the career of the Luxembourgers , especially since the House of Burgundy was inherited by the Habsburgs. Maximilian's marriage to Maria of Burgundy enabled him to claim the inheritance for their son Philip the Handsome and to oppose the French King Louis XI. 1479 at the Battle of Guinegate . France at least received the actual Burgundy and Picardy. The capital Dijon fell to France and the residence was moved to Brussels . With their Burgundian heritage, the Habsburgs rose abruptly to European status and were henceforth also known as the House of Austria and Burgundy . The conflict with France ( Habsburg-French opposition ) continued through them and lasted until 1756.

At the Burgundian court in Dijon, the knightly culture once again experienced a late climax. The Burgundian court ceremony (which was imported to Spain by the Habsburgs and from then on called the Spanish court ceremony ) remained the model for all absolutist royal courts in the centuries that followed. In Flanders, art experienced an exemplary heyday, especially in painting, where the brothers van Eyck and Rogier van der Weyden broke new ground.

The insignia of the dukes and the Order of the Golden Fleece , donated by Philip the Good in 1430, are in the treasury of the Hofburg in Vienna .

The branch line Burgundy-Nevers also had the coat of arms of Philip the Bold in its coat of arms, several golden lilies on a blue background, bordered by a red and white striped band, but combined this with the coat of arms of Flanders - the county of Nevers came from the inheritance of Margaret of Flanders -, a black lion on a golden background, and later also with those of the Counties Artois , golden lilies on a blue background, in front of it a red tournament collar with three golden castles on each of the three bibs, and Rethel , three golden rakes on a red background.

The Dukes of Burgundy from the House of Valois-Burgundy were:

See also : Detailed root list of the House of Burgundy