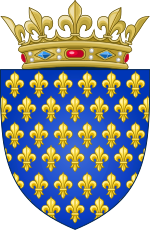 Coat of arms of the French kingdom under the Valois

House Valois is the name of a French royal family from which 13 kings of France came. 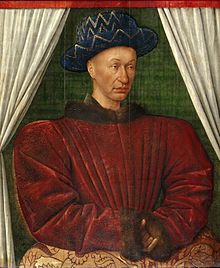 With the help of the Maid of Orléans, King Charles VII triumphed over the English in the Hundred Years' War.

The house Valois is in his male line a branch line of the French royal family of the Capetians derived by Prince Charles of Valois , a younger son of the French King Philip III. of the bold . Prince Karl was apanaged by his father in 1285 with the county of Valois as his own property.

When the Capetians in the direct line ( Capétiens directs ) died out with the death of King Charles IV the Fair in 1328 , according to the provisions of Salic law ( Lex Salica ), which excluded women from the line of succession, Count Philip of Valois (as Philip VI.) The throne. Philip was the son of Prince Karl von Valois and a first cousin of King Charles IV. Since this succession regulation was not yet firmly anchored in tradition at that time (e.g. it did not apply to the feudal nobility), the English also rose King Edward III Claims to the throne as he was a nephew of Charles IV through his mother. This resulted in the Anglo-French War, which went down in history as the Hundred Years War and had a major impact on the reigns of the first Valois rulers.

Valois was not the name of the dynasty, which, due to its origins, considered itself to be the continuation of the "House of France", the Capetian family. Rather, the name did not appear until the Hundred Years War: as a disparaging description of the dynasty as a descendant of the Count of Valois, whereas the English opponent of the war was a king's son. Nevertheless, this name prevailed in later historiography as a name for this Capetian branch line, similar to the houses of Artois , Évreux or Bourbon . 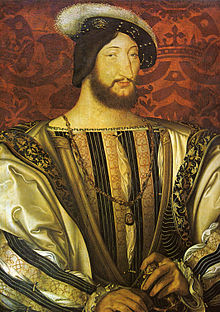 King Francis I is regarded as the Renaissance prince par excellence and a pioneer of modern absolutism.

Among the Valois kings, especially Charles V , Charles VII , Louis XI. and Franz I , in France (unlike in Germany at the same time) the role of the crown was strengthened despite the occasional fall in power and centralization on the capital Paris continued. The French national consciousness also finally emerged among the first Valois.

With the award of the Duchy of Burgundy in 1363 to Prince Philip the Bold by his father, King John II , an important side line of the Valois, the House of Burgundy , was founded that lasted until 1482 . With the Duchy of Burgundy, Philip the Bold and his descendants established a powerful, almost sovereign feudal state, which was able to hold out between France and Germany for a century and from which the present-day Benelux countries later emerged.

With King Heinrich III. In 1589 the direct line of the Valois died out. At 261 years of age, they were the longest ruling French ruling dynasty after the Capetians , who (excluding the Robertines , which also count towards them ) had 341 years. The Valois was followed by Henry IV, the Bourbon dynasty.

main lines of the Valois:

French kings from the House of Valois

Beginning of the Bourbon dynasty : 1589

Extract from the family tree of the Valois