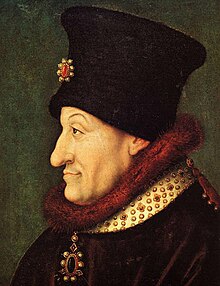 Map of the dominion of the House of Burgundy under Philip II.

Philip II the Bold ( French Philippe le Hardi , Dutch Filips de Stoute ) (born January 17, 1342 in Pontoise , † April 27, 1404 in Halle in Hainaut ) was the fourth son of the French King John the Good from the House of Valois and Guthas from Luxembourg . As Duke of Burgundy , he became the founder of the younger house of Burgundy as a side branch of the Valois.

He earned the nickname of the bold in 1356 when he was almost 15 years old in the Anglo-French battle near Maupertuis (south of Poitiers ). However, he was captured there together with his father Johann by the victorious English and brought to London. According to another account, he got his nickname in the course of imprisonment and a banquet with Edward III. , where he slapped an English cupbearer who was handing Eduard the food in the face and hollered at him: “Who taught you to serve the English king before the French?” Then Eduard said to Philip: “Truly, cousin, you are Philip the bold! "

After the ransom and the return of King John and his son in 1360, Philip von John was enfeoffed with the Duchy of Burgundy in 1363, the last Duke of the Capetian family, Philip I (also known as Philip of Rouvres), when the plague returned in 1361 died before he was able to marry his young wife, Margarete von Flandern . As early as January 15, 1362, at the request of his father Johann, his uncle, Emperor Charles IV , enfeoffed the county of Burgundy, which was part of the Holy Roman Empire .

1369 married Philip in turn Margarete, giving him 1384, upon the death of his father, Earl Ludwig II. Of Flanders , whose great possessions brought to them since 1361 also the German Reich belonging Franche-Comte counted.

In 1385 Philip succeeded in making peace in Flanders with the rebellious cities supported by England, especially Ghent , Bruges and Ypres , after they were decisively weakened in the Battle of Roosebeke on November 27, 1382 .

Also in 1385, during the double wedding of Cambrai , he succeeded in marrying his eldest son Johann with Margarete , the daughter of Duke Albrecht I of Straubing-Holland , and his own daughter Margarete with his son and heir, later Wilhelm II .

In the meantime (1380) after the death of his eldest brother, King Charles V of France, together with his two other brothers, the Dukes of Anjou and Berry, he had the reign ( government of the dukes ) for his nephew Charles VI , who was still a minor . accepted. After he took power himself in 1388 and surrounded himself with capable ministers from his father's former staff, Philip and his two brothers were largely disempowered. They, and especially the energetic Philip, returned to the controls when in 1392 Charles VI. began to suffer from mental disorders. However, in his endeavors to exploit the resources of the French crown for his own, often lavish purposes, Philip now found a rival in the form of Karl's ambitious, likewise ostentatious younger brother, Duke Louis of Orléans , who was run by the Queen and official regent, Isabeau , was supported.

The rivalry between Philipp and Ludwig at the court led to power struggles that extended into the country. After Philip's death, they continued under his son and successor Johann Ohnefurcht, only to lead to civil war-like conflicts after Ludwig's murder (1407).

Throughout his life, Philip had felt more like a member of the French royal family and a prince in France than as ruler over a relatively large and almost independent territory between France and the German Empire. However, he died symbolically in 1404 in Hainaut, that is, on the soil of the empire into which his successors Johann († 1419), Philipp († 1467) and Karl († 1477) tried to expand, practically expanding their territory expand their own state.

See also : Book of Hours of Philip the Bold, Duke of Burgundy

Philip as a progressive ruler

Philipp was not averse to innovations and inventions. In order to be able to control his extensive possessions, he was often on the move from one part of the country to another. For fast rides on the horse, he used dust goggles with glass glasses to protect the eyes. On slower journeys, including the entire entourage , the organ was always carried along, a clock to determine the exact time of day.

In the summer and autumn of 1386 he and France brought together a joint army with a fleet of 1,200 ships near the Zeeland town of Schleuse . An invasion of England was planned. For this purpose a wooden city with numbered wooden parts and associated hinges was prepared. The city should reach a city wall 14 kilometers in length. However, Philip's brother Johann von Berry appeared deliberately late, so that the autumn weather prevented the fleet from leaving.

Coat of arms of Philip II as Duke of Burgundy

Since his elevation to Duke of Burgundy, Philip had a coat of arms that consisted of the combination of the old coat of arms of the Duchy of Burgundy and his coat of arms as Count of Tours. He had received the County of Tours in 1360 as an apanage, but returned to the Crown in 1364 after being enfeoffed with Burgundy. The lilies with the red and white border marked Philip as the younger brother of the Crown Prince. While the latter, like the king himself, was leading three lilies, the sons who were born later increased the number of lilies and added a red and white border.

Philip II and his wife Margarete had eleven or seven children who had reached adulthood: