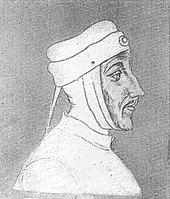 With the death of his father in the battle of Crécy in 1346 he inherited the counties of Flanders , Nevers and Rethel , the latter two as Ludwig III. He married Margarete von Brabant (* 1323, † 1380), daughter of Johann III. from Brabant . Ludwig and Margarete had only one daughter, Margarete III. (* 1348, † 1405), who then also became his heir. He also had several illegitimate sons, three of whom died in the Battle of Nicopolis in 1396 .

When his father-in-law died in 1355, he assumed the title of Duke of Brabant , but was unable to wrest the duchy from his sister-in-law Johanna . Around 1370 he had the Count's Chapel in Kortrijk built as a burial place for himself and his family; In 1374 he commissioned André Beauneveu to build his tomb. His mother died in 1382, leaving him the County of Artois and the Free County of Burgundy .

The later years of his life were marked by a civil war. In 1379 he received the support of his son-in-law, Philip II of Burgundy, in suppressing an uprising in Ghent . The subsequent uprising under Philipp van Artevelde led to his expulsion from Flanders after the battle of Beverhoutsveld (1382). Philip's influence brought him a French army, which defeated the Flemings decisively in the battle of Roosebeke . The resistance of the citizens of Ghent was maintained with English help until his death (1384).

The legend of the beheading bridge in Ghent is connected with Ludwig II of Flanders . He is said to have given two men, father and son, who had rebelled against him, to choose which of the two should behead the other on the bridge. According to a kind of divine judgment, he is said to have pardoned the two of them. Two statues on the bridge illustrated this legend until the end of the 18th century.