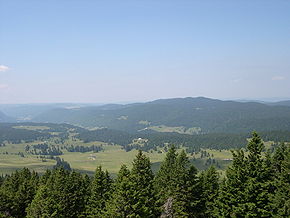 The Crêt Pela in the French Jura is at 1,495 m the highest point in the Franche-Comté region.

The Franche-Comté [ fʀɑ̃ʃkõte ], German free county (Burgundy) , was a region in eastern France until 2015 . It consisted of the departments of Doubs , Jura , Haute-Saône and Territoire de Belfort . The region covered an area of ​​16,202 km² and had 1,178,536 inhabitants (as of January 1, 2017). The capital of the region was Besançon . Today the area belongs to the Bourgogne-Franche-Comté region .

In the east, the region shared a border of around 230 kilometers with Switzerland . This partially natural boundary was formed by the Jura massif . Franche-Comté lay between this and the former regions of Alsace , Lorraine and Champagne-Ardenne in the north, Bourgogne in the west and Rhône-Alpes in the south.

The north, which includes parts of the Vosges , and the east with the French Jura are mountainous; the highest point is the Crêt Pela (1495 meters) in the Jura department. The area is rich in water; the main rivers are the Saône , the Doubs and the Ain . In addition, there are numerous medium-sized and small lakes, especially in the Jura department, which are also used for tourism. At 43%, the proportion of forests was the highest of all of France's 26 former regions; you will find mainly beeches , oaks and firs . The soils are not particularly suitable for intensive agriculture.

Description: A blue shield studded with golden shingles and a golden, red-tongued and armored lion with a golden crown .

In the prehistoric period , Franche-Comté was settled by the Sequaner tribe. Their capital Vesontio was on the site of today's Besançon.

Settled by Burgundians at the time of the Great Migration , it belonged to the Franconian Empire since 534 . Later the area belonged to the Kingdom of Burgundy , with which it was founded in 1033 after the death (1032) of the childless Burgundian King Rudolf III. fell to the Holy Roman Empire .

At the time of the Kingdom of Burgundy, in the first half of the 10th century , the brothers Letald II , Count of Mâcon , and Humbert began to expand their power in the region. Lethal seized the counties of Amerous (Amous), Portois , Varasque (Varais) and Scodinque (Escouens), Humbert became the first known lord of Salins and its wealthy saltworks . Humbert's descendants ruled Salins until the end of the 12th century, Letald's possession fell to his grandson Otto Wilhelm († 1026) from the House of Burgundy-Ivrea , who then appeared as the first Count of Burgundy . His descendants recognized the sovereignty of the empire. The land then passed to Friedrich Barbarossa via Beatrix of Burgundy , a descendant of Otto Wilhelm .

Barbarossa separated the area from the rest of Burgundy in 1169 and elevated it to the Palatinate Countess . The name free county (in French la Franche-Comté ) is attested only since the 14th century. In 1361 the land fell to the Counts of Flanders and in 1384 came with them to the land complex of the House of Burgundy . After the death of Charles the Bold in the Burgundian Wars with the Confederation , the Confederates waived their claims to the free county for 150,000 guilders . In 1493 it was awarded in the treaty of Senlis Philip the Fair and thus came to the Habsburg country complex, in 1556 to the Spanish line of the Habsburgs, with the actual duchy of Burgundy to the west of Dijon at that time coming to France. Between Habsburg and the Confederates, the neutralization of the Free County was contractually agreed in 1512 , with the Confederates taking over the military protection of the Free County. The area was extremely important economically for the Swiss, as most of the salt and metal imports came from there - especially from Salins-les-Bains - and salt is also essential for cheese production. Because of their internal quarrels and their dependence on France, the Confederation was unable to meet its military obligations towards the Free County when it became a war zone in the Thirty Years' War in the years of the Franco-Swedish War (1635–1648) and was also plundered. It was similar later when Louis XIV occupied the Free County in the War of Devolution in 1668 and in the Dutch War in 1674.

In the Peace of Nijmegen in 1678, Spain had to cede the free county to France. Until then it had belonged to the Burgundian Circle of the Holy Roman Empire. Louis XIV commissioned Vauban to fortify the former imperial city of Besançon and made it the new capital of the French province of Franche-Comté. Before that, Dole had been the capital.

Until 1790, Franche-Comté was one of the historic provinces of France . However, it was not part of the French customs territory. As an administrative unit, the area was abolished in 1790 and divided into the departments of Jura, Doubs and Haute-Saône. However, as a geographical name, the term survived.

The area around Belfort is historically not part of Franche-Comté, but used to belong to Alsace . It was part of the Haut-Rhin department until the annexation of Alsace by the German Empire in 1871 , but remained the only part of Alsace with France. Since then, this area has formed its own " Territoire de Belfort " department, which was assigned to Franche-Comté in 1960 when the administrative regions were established.

With the establishment of the regions in 1960, the Franche-Comté region was created. In 1972 the region received the status of an établissement public under the direction of a regional prefect. The decentralization laws of 1982 gave the regions the status of collectivités territoriales ( territorial authorities ), which until then had only been enjoyed by the municipalities and the départements . In 1986 the regional councils were directly elected for the first time. Since then, the region's powers vis-à-vis the central government in Paris have been gradually expanded.

At 72 inhabitants per square kilometer, the population density is low. Between 1870 and 1955, the population of Franche-Comté declined. The majority of the people live in rural surroundings and in the Haute-Saône in particular there are a striking number of small villages without any infrastructure such as a post office, bistro or bus stop.

The most populous cities in Franche-Comté are:

Structure of the Franche-Comté region

The Franche-Comté region is divided into four departments :

In 2006, the regional gross domestic product per inhabitant, expressed in purchasing power standards , was 91.9% of the EU-27 average . The automotive industry is very well represented in the region. The main Peugeot plant is located in Sochaux, which is still the largest plant of the PSA Group with around 10,500 employees , which also involves the supply industry. Important parts of the TGV are also manufactured here.

Well-known agricultural products are Comté cheese and, as a regional specialty, Vin jaune .