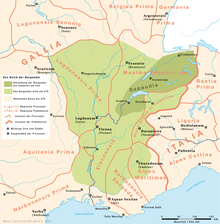 The Burgundian Empire between 443 and 476 AD

The people ( gens ) or the warrior association of the Burgundians , also Burgundians , is traditionally assigned to the East Germans . In late antiquity , Burgundian warriors founded an independent federal empire on the Rhone , which was merged into the Franconian Empire in the 6th century . Previously, the attempt to establish a Burgundian regnum on the Rhine had failed in 436.

Pliny the Elder first mentioned the Burgundians (as Burgundiones , reading also Burgodiones ) and referred to them as part of the Vandilians . Tacitus does not mention this name. The most important historical information about the original settlement areas of the Burgundians passed down the geographer Claudius Ptolemy for the middle of the 2nd century. After that they lived east of the Semnonen and north of the Lugier between the Vistula ( Vistula ) and the Suebus river ( Oder - Spree - Havel- Unterlauf), which forms the western border , that is, in what is now western Poland (Western Pomerania) and parts of Brandenburg. 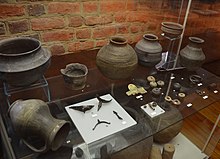 The earliest settlements of the Burgundians are seen archaeologically comprehensible perhaps in a crop group, as Lebus-Lausitz group or luboszyce culture is referred to and its focus on the middle or in the area of today Brandenburg , West Poland (Pomerania) and the Lausitz had . East of the Vistula in Sarmatia , according to Ptolemy, the Venedians (on the coast), the Gythons ( Goths ), and even further south the Frugundions, who were possibly part of the Burgundian tribe, who joined the Goths to protect themselves from the Vandals , settled from north to south had. The historian Zosimos (around 500) mentions such splinter groups, called Urugunds, when various peoples invaded the Roman Empire on the lower Danube around 256/257. This eastern group of Burgundians seems to have spread to the area of ​​the Sea of Azov and to have completely assimilated with the Huns after they were almost completely defeated by the Goths around 291. As with all late antiquity gentes , however, it can also be assumed that not entire "peoples" migrated, but only small groups, whereby, in the event of success, larger associations could emerge, which always reassembled and invoked a "traditional core". to which in particular an older, prestigious name ("Goten", "Burgundy" etc.) belonged. Modern research ( Herwig Wolfram et al.) Also assumes that these “great tribes” mostly emerged through contact with the Roman Empire. 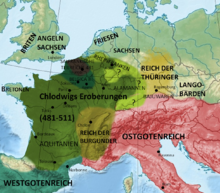 The empire of the Burgundians in 511, between the Frankish empire and the Ostrogoths

In the course of the southern movement of various Germanic groups, parts of the Burgundy probably also left their settlement areas on the Oder. The first reliable mention of groups of warriors who called themselves Burgundi in the Rhine - Danube region dates back to the year 278, when they allied with Vandals under the leader Igillos of the Romans under Emperor Probus on the Ligys River (probably the Lech near Augsburg ) were beaten. This defeat apparently led to Burgundy appearing as eastern or northern neighbors of the Alamanni in the following years and populating the areas on the Main that had been thinned out by the withdrawal of the Alamanni into the Dekumatland . In the year 286 Burgundians fell together with the Alemanni, Heruli and Chaibonen in the left bank of the Rhine area ( Gaul on). Only shortly afterwards, in the year 291, is the first report of disputes between Burgundy and Alamanni, when Burgundy apparently invaded areas of the Alamanni. As the hostilities between Romans and Alamanni intensified in the fourth century , Burgundies increasingly emerged as the Romans' allies against the Alamanni. After a large part of the Roman troops withdrew from the Rhine in 401, the way across the river was free. The crossing at Mainz on December 31, 406 (see Rhine crossing from 406 ) presumably presupposed the conquest of the northern Alamannenland to the lower Neckarbergland. The remaining Roman troops and the Franks fighting in Western Roman service were overrun by Vandals, Suebi, Alans and Burgundians (see also Migration ). The reasons for this are controversial. Several researchers believe that the Burgundians and Vandals fled from the attacking Huns , while others suspect a connection with the civil wars that raged in the Western Roman Empire.

In spite of intensive research, it is still largely unknown where exactly the settlement areas of the Burgundians lay before 406. No corresponding East Germanic finds are available from the areas around Kocher and Jagst , although those salt springs are often sought in this area for which the Burgundians and Alemanni fought in the second half of the 4th century according to Ammianus Marcellinus . East Germanic finds on Wettenburg near Urphar indicate, however, that Burgundian units were stationed there in Roman services. Even the seat of a Burgundian rex or an East Germanic-Burgundian federate camp was suspected there. The Burgundian territory has probably been in the mouth of the Main and in the area from the lower Neckar to the Rhine since the end of the 4th century .

Burgundy empire on the Rhine

After crossing the Rhine, Burgundian warriors did not move on to Gaul, but, like the Alemanni and Franks, signed a contract ( foedus ) with the Roman usurper Constantine III. who in return assured them annona . However, where exactly they settled in the period that followed is controversial. According to Olympiodoros of Thebes (whose work has only survived in fragments), in 411 Burgundians under their leader Gundahar (also passed down as Gundihar or Gunthahar) together with Alanen under Goar in Mundiacum in the province of Germania II raised the Gallor-Roman Jovinus to the counter-emperor. Older research has usually "improved" this to the effect that the unknown Mundiacum was equated with Moguntiacum (= Mogontiacum or Mainz) in the Germania I province . In the meantime, however, this is being questioned. The sparse literary references to a Burgundian empire on the Rhine are otherwise only supplemented by the note by the chronicler Prosper Tiro of Aquitaine from the year 413 about the settlement of Burgundian warriors on the Rhine. The treaty of alliance was apparently renewed once more, this time with the legitimate emperor Flavius ​​Honorius as contract partner, and the Burgundians undertook to secure the Rhine border together with Western Roman troops as foederati .

This arrangement worked quite well for about 20 years, and Westrom was once again able to rule the entire length of the Rhine. According to some researchers, Burgundian auxiliary troops can be proven archaeologically in Roman border forts (e.g. in Gellep-Stratum , possibly also in Alzey ). Orosius († around 418) claimed in the last years of his life that the Burgundians were now Christians and, moreover, no longer enemies, but protectors of the Romans (Hist. Adv. Pag. 7.32). The etymology of the name Burgundi as "those who occupy the burgi (forts)" , which Orosius has handed down in this context, but which is incorrect, was probably created around this time .

But Gundahar's efforts to expand his sphere of influence to the west (into the province of Belgica I ) by taking advantage of renewed internal Roman conflicts , finally brought the Burgundians into conflict with the Romans. In 435, a Burgundian army was defeated by the Western Roman army master Aëtius and had to retreat to Germania I again. A year later, the Burgundian empire on the Rhine was finally destroyed by Hunnic auxiliary troops from West Rome. This event represents the historical core of the Nibelungen saga , whereby Attila , the model for the Middle High German Etzel or Old Norse Atli of the saga, actually played no role in the fall of the Rhenish Burgundy empire.

The Nibelungenlied from around 1200 names this people Burgonden and their King Gunther , whose seat is located in Worms . The 12th century Burgundy, however, was around Arles (Kingdom of Arles) and further north (Duchy of Burgundy in the region around Dijon ), while the 5th century Burgundy a few years after the smashing of their empire on the Rhine in the area south of Lake Geneva were settled (see below). In order to emphasize the differences, it is customary in research to refer to only the people of the Nibelungen saga as Burgundians , while the historical people are called Burgundians .

Relocation to Savoy, expansion into the Rhone Valley, Biel and France 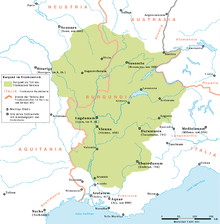 Burgundy as part of the Frankish Empire

A few years after the catastrophic Burgundian defeat by the Romans and Huns in 436, the surviving warriors had regrouped and were eager to return to imperial service. This was the reason for their settlement, which was probably carried out according to Roman billing law, in 443 as foederati in what is now western Switzerland and Sapaudia . This southeastern region of the Maxima Sequanorum province comprised the area of ​​Geneva, Haute-Savoie, western Switzerland and parts of the Swiss plateau up to the confluence of the Aare and the Rhine, perhaps even as far as the Lake Constance area. An attempt to expand towards the Mediterranean soon failed due to the resistance of the Visigoths who were already settling there . In 451 the Burgundians fought on the side of Aëtius on the Catalaunian fields against Attila. After that there was a closer reference to the Roman Empire and from around 500 to a partial merger with Franconian groups. After the always tense relationship with the Goths had briefly relaxed, the Burgundians were militarily defeated by Theodoric in 507/8 . Shortly afterwards, under King Gundobad , they succeeded in expanding their territory again along the Rhône.

In addition to present-day western Switzerland and present-day Burgundy in France, the empire also comprised parts of German-speaking Switzerland west of Solothurn between the Jura and Aare, including Basel , Biel , Bern , Friborg , the Valais , Aosta , Savoy, the Dauphiné and the Rhone Valley down to Avignon . In 516 Gundobad had the law in force in his country written down, the Lex Burgundionum , a mixture of Roman provincial law and Germanic influences. The Burgundians were quickly assimilated by the Romansh population. Their immigration to Switzerland and Burgundy did not result in a long-term shift in the language border , unlike the subsequent immigration of the Alemanni. Overall, good relations were maintained with the Eastern Roman emperor, the formal overlord, which is expressed, among other things, in the fact that the reges of the Burgundians were awarded the title of magister militum (army master).

Under the following rulers Sigismund , the first Burgundy, who also bore the high Roman honorary title of Patricius , and Gundomar , the Burgundian Empire was again increasingly involved in the conflict between the Franks and Ostrogoths , but changed sides. In 523 and 524 the Franconian Merovingians attacked the Burgundy Empire, which now, seeking protection, leaned against the Ostrogothic Empire of Theodoric I in Italy. After Theodoric's death in 526, the Burgundians were finally defeated by the Franks in the decisive Battle of Autun in 532 and had to give up political independence. The Frankish kings Chlothar I , Childebert I and Theudebert I divided the empire among themselves. Within the Frankish empire there was still a part of the empire called Burgundia - the name was to become famous in the Middle Ages.