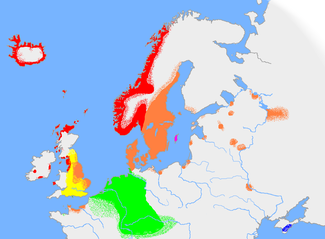 Old Norse is a collective name for the North Germanic dialects that were spoken from around 800 (beginning of the Viking Age ) to at least around 1350 in Scandinavia and on the islands until 1500. Its direct precursor is the primordial Nordic . The proper name of this is from the 9th century gradually from each other differentiating languages in the Middle Ages was dǫnsk tunga (literally "Danish tongue").

Initially limited to Denmark , Norway , Sweden and the southwest coast of Finland , the Old Norse spread with the Vikings to the Orkneys , the Shetland Islands , parts of Scotland , Ireland and Central England , the Faroe Islands , Iceland and small parts of Greenland .

In Old Norse, a distinction is made between Old West Norse and Old East Norse , e.g. B. based on the East Nordic monophthonging . Old West Norse includes Old Norwegian and Old Icelandic . The Old-Eastern Nordic dialects Old Danish and Old Swedish differed little from one another until the 13th century. Old Gutnian , which was spoken in Gotland , differs from both groups and is considered a separate branch.

For the early to high Middle Ages , some researchers assume that the Old Norse languages ​​are mutually understandable with Old Low German ( Old Saxon ) and Old English .

Since most of the Old Norse literature has been handed down in Old Icelandic and Old Norwegian, the terms Old Norse, Old West Norse and Old Icelandic are often used synonymously.

Due to the close relationship, the Old Norse languages ​​are also understood as dialects of Old Norse, the normalized Old Icelandic is then considered the standard form.

In Scandinavia, the old (west) Nordic language is partly swedish norrön, dan. / Norw. called norrøn (t) ; the term is also related to the old Norse culture. From the Norwegian name for Old- West Norse, norrønt (or norrøn and norrøne ), the German name in the book Norröne Grammar at a Glance, translated from Norwegian (original title: Norrøn grammatikk i hovuddrag ) and the Norrönen learning method developed by German-speaking authors, comes from and workbook .

Relationships with other languages

The modern successors of Old Norse are the west Norse languages Icelandic , Nynorsk , Faroese and the extinct Norn from the Orkney and Shetland Islands as well as the east Norse languages Swedish , Bokmål and Danish ; on Nynorsk and Bokmål see also the article Norwegian language .

If you look at the morphology, Icelandic and Faroese have developed the least from the Old Norse language level in the last thousand years. Both languages ​​have many grammatical properties, some of which have been lost in the other Scandinavian languages ​​and dialects. A distinction is still made very precisely between three genders , masculine, feminine and neuter, and four or three cases : nominative, genitive, dative, accusative in Icelandic; Faroese preserves the genitive only to a very limited extent in the upscale language, but has the other three cases. Many old words are also preserved in the vocabulary of today's Icelandic and Faroese. In addition, it is very reminiscent of Old Norse due to the extensive lack of foreign words . When defining the orthography of both languages ​​in the 19th century, care was taken to ensure that they were based on the Old Norse original, but the pronunciation of the vowel signs in particular was redefined.

In the course of its history, English has been subject to Scandinavian influences several times. These can still be seen today in some borrowings from the time of the Vikings and Danelag , such as B. cast, knife, skirt, sky, take, window and they . A particularly strong influence can be seen in the Scots , which developed from the northern dialects of early Middle English .

The vowel phonemes usually appear as pairs of short and long vowels. In writing, the long vowel is marked with an accent. All phonemes have, more or less, the expected phonetic realization.

u umlaut , generally caused by u, w:

Refraction of "e", generally caused by the following a or u:

Old Norse knows six plosives. Of these occurs / ⁠ p ⁠ / rare on letters, while / ⁠ d ⁠ / and / ⁠ b ⁠ / do not occur because of the fricative allophones of the Proto-Germanic between vowels (about: * b * [ß]> v between vowels). The phoneme / ⁠ g ⁠ / is word within and at the end of a word as a voiced velar fricative [⁠ ɣ ⁠] realized is unless geminated .

The velar fricative [x] is an allophone of / h / if it is pronounced in the combinations hv [xw], hl [xl], hr [xɾ] and hn [xn], for example in words like hvat was, hlaupa run , run, hringr ring, hnakki neck, neck .

Unified Old Norse spellings were developed in the 19th century and are partly phonemic. The most notable deviation is that the non-phonemic difference between voiced and unvoiced dental fricatives is highlighted. As mentioned above, long vowels are marked with an accent. Most of the other letters are expressed with the same glyph as in the IPA, exceptions are shown in the following table.

Old Norse was - with the exception of Old Danish, which was deflected early on - a strongly inflected language. Most of the grammatical complexity is retained in modern Icelandic and Faroese, while Danish , Norwegian and Swedish have a greatly simplified morphological system.

Old Norse nouns could have one of three grammatical genders: masculine, feminine, or neuter. Nouns - as well as adjectives and pronouns - were declined in four grammatical cases: nominative, genitive, dative and accusative, each in the singular and plural. As in Latin, there were different classes of nouns within each gender, u. a. (the following examples are taken from Old Icelandic):

Old Norse, like the modern Scandinavian languages, knows a certain article that is attached to the noun and is also declined in Icelandic and Faroese today (see the table above). However, it is used much less often than in today's languages. In addition, as in modern languages, there is a free-standing and prefixed article, which (as in German) occurs together with the weak adjective.

Unlike the modern mainland Scandinavian written languages, Old Norse was conjugated according to people. Since ancient Norse times, the form of the 2nd person singular (“you”) also applies to the 3rd person singular (“he / she / it”), both endings -r, -ar, -ir in the indicative depending on the verb class.
As in all ancient Germanic languages, there were only two synthetic tenses (tenses) - present and past tense. In addition, there are the indicative and subjunctive modes as well as an imperative in the present tense.

As the Urnordische in the 8th century developed into Old Norse, the umlauts distinguished by geographic location: The typical umlauts (about fylla from * fullian ) were stronger in the West, while those in Diärese resulted (example: hiarta of Herto ) in East were more influential.
This difference was the main reason for dialectization in the 9th and 10th centuries, which coined an Old-West Norse dialect in Norway and the Atlantic settlements, and an Old-East Norse dialect in Denmark and Sweden.

A second difference was that Old West Norse lost certain combinations of consonants. The combinations - mp -, - nt -, and - nk - were assimilated to - pp -, - tt - and - kk - in Old West Norse, but this phenomenon was restricted in Old East Norse.

However, such differences were the exception. The dialects were very similar and were often considered to be the same language, a language sometimes referred to as dǫnsk tunga (Danish tongue [language]) and sometimes as norrœnt mál (Nordic language). This becomes clear in the following quotes from Snorri Sturluson's Heimskringla :

Here is a comparison between the two dialects. It is a transcript of one of the Funbo rune stones (U990), meaning: Veðr and Thane and Gunnar built this stone after Haursa, their father. God help this soul.

The earliest inscriptions in Old Norse are runes from the 8th century. Runes were in use until the 15th century. With the conversion to Christianity in the 11th century came the Latin alphabet . The oldest surviving Old Norse texts in Latin script date from the middle of the 12th century. Gradually, Old Norse became the means of transporting a large and varied dialectal literature - unique in medieval Europe. Most of the extant literature was written in Iceland. The best known are the Norse and Icelandic sagas as well as mythological literature, but there is also a large body of religious literature, translations of courtly romances into Old Norse, classical mythology, the Old Testament , as well as instructions, grammatical treatises and many letters and official documents.