This article explains the archipelago belonging to Scotland; for the sub-Antarctic archipelago see South Shetland Islands , other meanings are given by Shetland (disambiguation) .

The south mainland near Lerwick

Shetland [ ˈʃɛtlənd ], also mod. engl. Shetland Islands or Shetlands for short , in German often Shetland Islands , are a group of islands belonging to Scotland in the North Sea and in the North Atlantic between Norway , Scotland / Orkney and the Faroe Islands . Some linguists see a connection with the Ins Cat ("island" of the Cattes or Chatti) mentioned in Old Irish texts, but otherwise not identifiable. With the exception of the remote islands of Fair Isle and Foula , they extend over an area of ​​80 km by 120 km between the 59th and 61st parallel and form the northernmost part of the United Kingdom. About two thirds of the 1,466 km² area is on the main island of Mainland . The administrative center and largest city of the Shetlands is Lerwick on Mainland. The historic capital and second largest settlement is Scalloway . The highest point in the Shetland Islands is Ronas Hill on Mainland with 449 m above sea level. 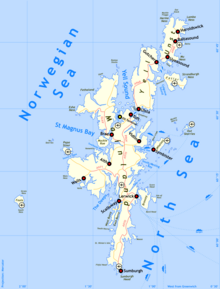 Landscape around Scalloway, Mainland, in the Shetlands

The Shetlands have been around since the 3rd millennium BC. Settled. The inhabitants practiced agriculture and livestock farming and built stone graves (e.g. Gillaburn , Islesburgh Cairn , Ronas Hill , Punds Water or Vementry ).

In the 2nd millennium BC BC ( Bronze Age ) the climate became more humid and colder, which is why the inhabitants settled closer to the coast. In the Iron Age , brochs , round stone towers that can still be viewed today were built here : for example Clickhimin , the Broch of Culswick , the Jarlshof and Broch of Mousa , but also blockhouses, ring forts, rampart forts, earthhouses basement and wheelhouses or temples like Stanydale characterize the picture of the archipelago.

Map showing the probable location and extent of Doggerland around 8000 BC. BC on the area of ​​today's Europe with additional representation of the land areas at that time in today's Viking (sea area) and around the Shetland Islands.

It is largely unclear which language was spoken on the islands before the Vikings arrived. Possibly it was Pictish , a now extinct - probably Celtic - language. In the 9th century this language was replaced by the Old Norse language spoken by the Scandinavian immigrants , which developed into the Nordic dialect Norn in the Shetland Islands . The Norn was spoken on the islands well into the 18th century, when it became extinct it was replaced as a colloquial language by Scots . The influence of the norn is, however, still in a number of grammatical peculiarities (for example the formation of tenses with "ta be" instead of "tae hae" = "I am been" instead of "I hae been" or "I wis been" instead of "I haed been" ) and a multitude of words borrowed from the norn. This makes the Shetland island dialect a distinctive variety of Scottish English, more precisely the "North Insular Scots".

Antiquity to the present

The Scots , of whose raids the Romans report, originally came from Ireland. At the time of the Kingdom of Dalriada, they expanded from County Antrim in Northern Ireland to Argyll in western Scotland. The Picts ("the Painted"), first mentioned in Roman records in AD 297, lived in the rest of Scotland and the northern islands . The Vikings landed here in the 9th century and named the islands Hjaltland . They established their own new laws and, above all, their own language, which developed into the norn . They were Christianized in the 10th century . Around 1195, the islands were directly subordinated to the Norwegian Crown for some time . The Shetlands later belonged to Norway. In the 14th century Norway (with its possessions) united with Sweden and Denmark . The hoard on St Ninian's Isle dates from the Viking Age .

The Norwegian-Danish crown estate on the Shetland Islands, i.e. the country in question and the rights arising from the land, came under the control of Scotland in 1469 as security for the dowry of the daughter of the Danish King Christian I , Margaret , when this King James III. of Scotland married. As a result, Shetland was annexed by the Kingdom of Scotland , but unlike Orkney, it was not immediately integrated into the general government of the Empire, but was subordinated to the Royal Scottish Privy Council . Since then, the Scottish influence on the islands grew. The Old Norn as a common language died out in the 19th century. Nevertheless, there are still a few old people, especially on the northernmost island of Unst, who remember the old sagas and stories.

From the 15th to the end of the 17th century, lively trade relations developed between the Hanseatic League and the Shetlands, which required numerous imported goods.

During World War II , the Shetlands played a role in supporting the Norwegian resistance and in escaping occupied Norway. From here command operations were carried out and agents smuggled in. With mainly Norwegian fishing boats, the crossing between the Shetlands and the entire Norwegian coast was accomplished, which was only possible in winter. The actions became known as the “ Shetland Bus ”, of which the best known were probably the attacks on the German battleship Tirpitz in 1942 and on the heavy water system of Norsk Hydro in Rjukan in Telemark , Norway .

The archipelago was formed at the beginning of the Paleozoic as part of the Caledonian mountain formation . It is made up of different sedimentary rocks. Shetland's surface is rocky. The archipelago is also called "The old rock" because hard sediments, one of the oldest rocks on earth, dominate here. Shetland-Mainland, Yell and the west of Unst are made up of crystalline schist and gneiss. North Mainland is mostly made up of granite . Gabbro and serpentine form the east of Unst and Fetlar. Sandstone is only found on the western and eastern edges of the archipelago. The ice age glaciers are responsible for the relief there . The landscape here is similar to that of the Orkneys, while the rest of the Shetlands is rough. The soil layer is thin, boulders, bogs and acid meadows, numerous small lakes and ponds are present. The hard rocks of Mainland offered enormous resistance to the ice masses. These followed the weak zones in the earth's crust, the folds and fault lines from the time of the mountain formation or the valleys filled with limestone deposits. This is how the mighty glacial valleys and the long and deep Voes were created : Bowland, Clousta, Culbinsbourgh, Footabrough, Leiraness, Papil, Quarf, Scalloway, Scatsta, Setter, Snarraness, Sound, Sullom and Tresta. Picturesque shapes that characterize the west-facing coastal panorama were created in the interplay of westerly winds and surf that undermined the rocks. Gloups developed when holes broke in the thin cover of sea caves . Rock crevices that cut into the land widened into so-called geos .

The Geos and Gloups and the rock gate of Dore Holm off the west coast of Esha Ness are the most impressive sights in the northwest of Mainland. The catpund burn with steatite , serpentinite and layers of slate leads about one kilometer east into the sea near Cunningdburgh.

Overall, the Shetlands are very mild and humid (1000 mm of precipitation annually), determined by the Gulf Stream . The winter on the islands is usually quite mild with only occasional frost and rather rare snowfall , whereby the winter half of the year is also the rainiest time of the year. In summer , temperatures can easily rise to 15 ° C and more. However, storms, heavy rains and fog are common and can make the weather relatively uncomfortable even in summer.

The constituency of Orkney and Shetland is represented in the House of Commons by one MP, since 2001 Alistair Carmichael . In the Scottish Parliament provides Shetland a deputy, since 1999 this is Tavish Scott . Both belong to the Liberal Democrats .

The Shetlands are one of the 32 Scottish Council Areas that have existed in Scotland as a single-tier administration since 1996. The associated body is the Shetland Islands Council. It consists of 22 MPs who represent seven electoral districts ( Ward ). Since the election in May 2017, it has consisted of 21 politically independent MPs and one member of the Scottish National Party . The council has been chaired by Steven Coutts since May 2018, with Emma Macdonald deputy. The seat of the council and administration is the city of Lerwick , which has the status of a burgh .

Between 1975 and 1996 there were nine regions in Scotland , which were divided into districts ("two-tier administration"), as well as the three island districts (Shetland and also Orkney and Western Isles ). The regions were in the reorganization of local government in 1975 instead of 1889 established administrative counties were created.

The civil parishes have had no administrative function since 1929 and since then have only served as regional statistical units.

These regional units were introduced in 1975 and reorganized in 1996, with the result that some civil parishes now include two or more community council areas. In July 2012 there were 18 Community Council Areas in the Shetland Islands, all with active community councils.

The most important industry on the islands is the oil industry. An undersea pipeline leads from the Ninian and Brent oil fields in the North Sea between the Shetlands and Norway to Sullom Voe Bay , where Europe's largest oil terminal has been built. However, the British oil fields have exceeded their maximum oil production since 1999 .

Moreover, it has always been a pronounced on salmon fishing and in former times also catching herring specialized fisheries given. A more recent branch is the breeding of salmon on farms , which began in the 1990s. But this branch is already in decline again and there are attempts to breed other fish species. With the prevailing climate and soil conditions, agriculture can almost only be practiced as pasture farming (some potatoes and occasionally carrots). In addition to sheep, a few Galloway cattle , which are particularly frugal, are kept. The Shetlanders have always been regarded as fishermen who do a little farming, the Orcadians as farmers who do a little fishing.

Another economic pillar is tourism, which is mainly characterized by private B&B accommodations for individual tourists. Some former fishermen now offer tours to the cliffs of nature reserves and bird sanctuaries, for example to the south side of Bressay or the Isle of Noss .

The Shetland Islands can be reached by ferry or plane.

The main ferry connections are:

The ferry company SIC Ferries operates between the islands of the Shetlands and is owned by the Shetland Islands Council .

The earlier ferry connections with the Norröna to Tórshavn ( Faroe Islands ), Bergen ( Norway ) and Seyðisfjörður ( Iceland ) have been discontinued since 2007. From 2009 the Norröna will only operate on the Denmark – Faroe Islands – Iceland route.

There are regular flight connections between the Sumburgh airfield on the southern tip and all major airports in the United Kingdom such as London (currently only in summer through the Faroese company Atlantic Airways , which stops here on the Tórshavn- London route ), Edinburgh and Glasgow and numerous Scottish regional airports like Aberdeen, Inverness , Kirkwall, Wick .

Regional air traffic is handled exclusively via Tingwall Airport (northwest of Lerwick); Scatsta Airport at the Oil Terminal Sullom Voe has been reactivated and expanded for commercial air traffic .

Within the archipelago, the connection between the individual islets is mainly maintained by ferries. In addition, some of the islands are now connected by bridges and there are several bus routes. On Unst is on the main road, the A968 , the so-called Unst Bus Shelter , which is also one of the most famous sights of the island due to its special equipment.

Every year on the last Tuesday in January there is a major regional social event, the " Up Helly Aa " festival. The Shetland Folk Festival takes place a little later in spring . Playing the "fiddle" is one of the traditional traditions. The tradition of the “Shetland Fiddlers” is known in folk music circles across Europe for their achievements. At the same time there are numerous rock bands from the younger Shetlanders.

The islands have a local museum, the Shetland Museum .