The Scottish island of West Burra is the main island of the Scalloway Islands in the southwest part of the Shetland Islands . It is connected to the Shetland main island Mainland by bridges over the neighboring island of Trondra . There is also a land connection to the sister island East Burra .

The slightly hilly and almost treeless West Burra is ten kilometers long, up to two kilometers wide and covers an area of ​​around 12 km². The main town is the port town of Hamnavoe on the northwest coast , the third largest town in the Shetlands. The second most important place is West Burra of the same name further south.

The migration to the mainland could be stopped by the bridge connection. Lately, the island's population has even increased significantly, as many newly arrived residents work in Lerwick or Scalloway on the now easily accessible island of Mainland. In 2011 West Burra had the fourth highest population of all Shetland Islands with 776 inhabitants after Mainland, Whalsay and Yell .

In addition to the commuters to the towns on the main island, the population lives from fishing, boat building and declining agriculture. There are also several places to stay overnight on the island, which is poor in archaeological monuments.

Copy of the Papil Stone at St. Laurence Church 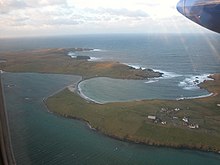 West Burra from the air