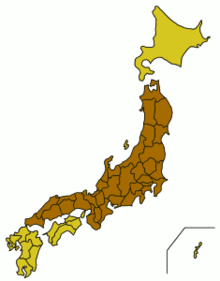 One speaks of a main island when a single island in a group of islands is by far the largest or most important (economically, politically, religiously, culturally). Some archipelagos also have two, three or four main islands.

In some archipelagos, the main island does not have its own name that differs from that of the archipelago. Examples are Mainland (Orkney) and Mainland (Shetland) ( Mainland is English for main island).

The islands in a group that are adjacent to the main island are called minor islands .

Japan has four large islands, from north to south: Hokkaidō , Honshū , Shikoku, and Kyūshū . Honshū (Hondo), the largest and most important island, takes up around 60 percent of the country's area. About 70% of the people of Japan live on it.

Indonesia consists of 17,508 islands, 6044 of which are inhabited. The largest in terms of area are the Indonesian parts of Borneo (Kalimantan) and New Guinea as well as Sumatra and Sulawesi (Celebes). The main island, however, is Java , with around 130 million people, over 60% of the island nation's population, but which only makes up 7% of the country's area and is Indonesia's fifth largest island. In the Transmigrasi resettlement project , several million people have been resettled from Java to Sumatra, Western New Guinea , Kalimantan and Sulawesi over the past few decades .

The Faroe Islands , the Solomon Islands , the Nicobar Islands and Vanuatu , for example, have several small islands, each with almost the same area .

The sub-Antarctic Falkland Islands are more than a thousand times less populated . Its 200 islands are usually only a few square kilometers, while the East and West Islands each have an area of ​​6000 km². The only 3,000 residents are compared to 600,000  sheep .

The two parts of New Zealand are almost equally important . The capital Wellington is on the climatically more pleasant North Island and the highest mountain in the New Zealand Alps (3763 m) on the scenic South Island .

The two Fiji islands are similarly "balanced", but only one-fifteenth the size .

The huge arctic double archipelagos Novaya Zemlya and Severnaya Zemlya , on the other hand, are almost deserted - similar to the five to eight large islands of Canada's northwestern territories .

Archipelagos with a main island

Denmark with its 470 islands is mostly located on the Jutland peninsula . The island of Zealand with around 16% of the area and the capital Copenhagen is more important than the mainland or the other islands. Denmark is the only country other than Equatorial Guinea whose territory is predominantly on the mainland, but whose capital is on one of several islands, which in this sense is the "main island".

Many states consist practically of just one island - at most surrounded by a wreath of tiny islets . These include above all:

Cuba , Jamaica , Hispaniola ( shared between Haiti and the Dominican Republic ), Ireland ( shared between Great Britain and the Republic of Ireland ), Iceland , Malta , Madagascar , Sri Lanka (Ceylon), Singapore, and Papua New Guinea . In contrast to Greenland, Australia is considered a continent .

The following "main islands", which in many cases belong to a distant state, are less significant - except in part for tourism :