The title of this article is ambiguous. Further meanings are listed under Bermuda (disambiguation) . 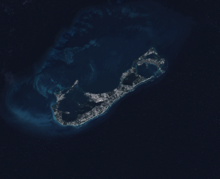 The archipelago consists of around 360 coral islands , of which only around 20 are inhabited. The island of Grand Bermuda is by far the largest at 39.3 km². The main island borders on Somerset Island in the northwest and Saint George's Island in the northeast .

The climate on the Bermuda Islands is subtropical and humid . However, low temperatures of 5 degrees can also occur in January. Hurricanes are common in September .

The highest point in the country is Town Hill at 79  m . The strong fragmentation of the islands and the numerous karst caves are striking . The island is surrounded by coral reefs . It is the northernmost tropical coral reef on earth . There is only one place in eastern Bermuda that large cruise ships or container ships that are regular visitors to Bermuda can pass the reefs. Since there are no rivers on the islands, rainwater has to be collected in cisterns .

Characteristic of the subtropical vegetation are rubber trees , sage species and the Bermuda juniper . Mangrove trees also grow on some parts of the coast ; the stocks in Bermuda are the northernmost occurrence of mangroves in the Atlantic.

The Bermuda petrel , which is almost extinct, has its breeding grounds on the Bermuda Islands .

There are also several national parks there , both above and below water.

Demographic development of Bermuda from 1960 to 2017 (numbers in thousands)

54% of the residents are African American , 31% are white (as of 2010). The black inhabitants are descendants of African slaves , the whites are often of British origin. 10% of the population are of Portuguese origin, other studies indicate up to 25% mixed population. The influx took place mainly in the last 200 years, often from geographically close regions such as the Azores . The capital Hamilton only has around 1000 inhabitants. The official and colloquial language is British English . Almost half of the population belongs to different Protestant denominations (around a third of them Anglican ), 15% are Catholic .

Bermuda residents enjoy a high standard of living , but the cost of living is very high. There is practically no unemployment . Over 80% of the state budget is spent on social benefits and education . There is no VAT , but there are high customs duties . An income tax there is not only an income tax (payroll tax). It accrues to both employees and employers in different amounts and is progressive . For employees, the tax rate is between 4% and 8.75%. Employers pay between 0 and 10.25%, depending on the size and industry of the company. Privately imported goods are taxed at 25% (excluding the first $ 100 ).

From 6 to 17 years of age there is general compulsory education . Many families invest a large part of their money in the school fees of an expensive private schooling for their children . There are five private schools and numerous public schools . All students wear school uniforms . The Bermuda College provides a higher education ; at a university , the students go to the United States , Canada or England .

Many Bermuda residents have multiple professions. Only since 1961 has the black majority been allowed to sit next to whites in the bus, cinema or restaurant. However, it is still the case that the public schools are almost exclusively attended by children and young people of African origin.

Bermuda was discovered in 1503 by the Spaniard Juan de Bermúdez , who did not go ashore because of the dangerous reefs that surround the island. In 1511 Petrus Martyr von Anghiera published one of the first maps on which the archipelago is drawn. It bears the name la bermuda on it . Spanish maps showing Bermuda were also published in the same year. Spanish and Portuguese ships called at Bermuda to get fresh water and meat. The fear of ghosts and the difficult sea conditions initially prevented the Europeans from setting up settlements here.

The first settlers were involuntarily English colonists en route to Virginia . On July 28, 1609 , her ship Sea Venture hit a reef in Bermuda in a severe storm . The 150 castaways were forced to go ashore. The group, led by Sir George Somers, spent ten months there. From the wreckage of the Sea Venture and wood found on site, they built two smaller ships with which they continued the voyage to Virginia. Their accounts of the island attracted a great deal of attention in England, so that James I handed over control of the islands to the Bermuda Company in 1615 . Saint George’s was founded in 1612 by around 60 British colonists . A deputy government was installed in 1620, after which Bermuda became an independent colony. The Anglo-American name Somers Isles for Bermudas is derived from this time .

Because of the remoteness of the islands, their focused industry first on trade with salt and to the shipbuilding highly suitable timber of Bermuda juniper . The centrally located port city of Hamilton , founded in 1790 , became the capital in 1815.

After the end of the American Revolutionary War and the associated recognition of the sovereignty of the United States of America in 1783, the Royal Navy no longer had any naval bases between Nova Scotia and Florida, Spain. As a result, Bermuda became the main base of the British fleet in the western hemisphere until Great Britain reduced the Royal Naval Dockyard, Bermuda, to a small supply base (HMS Malabar) in 1951.

Bermuda gained importance to the United States during World War II . In 1941 the US Army established two permanent troop bases , in return the British armed forces received surplus destroyers from the US Navy ( destroyer-by-base agreement ). In 1943 the so-called Bermuda Conference took place there. In 1995 the US, Canadian and British bases were closed. The British Army units had also been withdrawn in 1957, with the exception of the Bermuda Volunteer Rifle Corps (BVRC) and the Bermuda Militia Artillery (BMA), which were merged to form the Bermuda Regiment in 1965 .

After the Second World War, Bermuda developed into a successful tax haven economically . In 1968 it received a constitution , which strengthened the drive for independence . However , this was rejected in a referendum in 1995. The territory has been on the UN list of sovereign territories without self-government since 1946 .

Bermuda is an overseas territory of the United Kingdom . The political system is based on the Westminster system . The head of state is Queen Elizabeth II , who is represented by a governor appointed by her .

The area is largely autonomous, only a few areas - in particular foreign and defense policy - are decided directly by the government in London. The Bermuda Parliament, founded in 1620, is the fifth oldest in the world and the only one that has existed continuously during this period.

Bermuda is administratively divided into nine parishes and two municipalities : 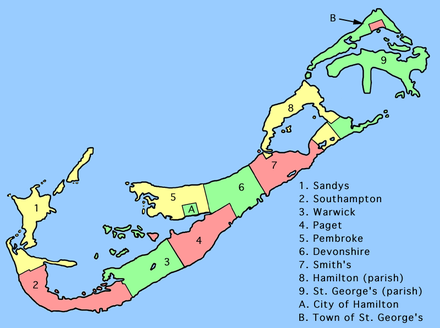 Parishes and parishes of Bermuda

Since Bermuda is a tax haven with low tax rates, numerous credit institutions and insurance companies have settled there . Bermuda is considered the third largest center for reinsurance (e.g. Everest Re Group , PartnerRe and Qatar Re ) in competition with London and New York . The international corporations that have moved their headquarters there over the decades include the spirits manufacturer Bacardi and the largest oil tanker shipping company in the world, Frontline . Bermuda was ranked 36th in a ranking of the world's most important financial centers (as of 2018). The gross domestic product per capita was around 85,700 US dollars in 2013, making it one of the highest in the world. However, with the withdrawal of some Bermuda companies and the decline in FDI, the economy fell into a recession that lasted for several years. The nominal gross domestic product of Bermuda, determined using a different method, was around 7.14 billion US dollars in 2017.

In the course of the discussion about measures against tax havens in the context of the G-20 summit, a massive departure of international corporations from Bermuda began in 2008. Within a few months by the beginning of September 2009 - Accenture , ACE Limited , Cooper Industries , Covidien , Foster Wheeler , Ingersoll Rand , Tyco Electronics , Tyco International and Weatherford International - nine of the once twelve best-selling companies in Bermuda relocated to other countries .

On January 28, 2016, the EU Commission presented a package of measures to combat tax evasion , including Bermuda on the black list of tax havens.

An important industry is tourism . In 2016, the tourism sector's direct contribution to Bermuda's GDP was 4.5%; the total contribution, which also takes into account the effects of tourism on other economic sectors, was 13.9% of total economic output in the same year. More than 80% of the tourists come from the USA , but increasingly also from Western Europe . Part of the state revenue came from the leasing of an area around the airport to the USA as a military base .

The subtropical climate enables intensive agriculture . The main crops are tropical fruits , potatoes , vegetables , tobacco and flowers (especially lilies ). The fishing just covers its own needs. Apart from the lime used as a building material, there are no natural resources . Small industrial companies process fragrances and manufacture pharmaceutical and cosmetic products .

The main exports are tropical fruits, vegetables, flowers, plant extracts, and cosmetic and pharmaceutical products. Food of all kinds, petroleum products and automobiles must be imported. There are hardly any large cars in Bermuda; On the one hand there is a lack of routes, on the other hand they are extremely expensive due to 100% taxation. The currency of Bermuda is the Bermuda Dollar (BMD), which is converted at a ratio of 1: 1 to the US Dollar (USD). The US dollar is also common and recognized as a means of payment in Bermuda. Bermuda can issue its own bonds. The government bonds of Bermuda are rated A- by the rating agency Standard & Poor’s (as of 2018).

Bermuda's LF Wade International Airport is connected to the American mainland and London by several scheduled flight services . Charter airlines connect the islands with Europe . State buses run in rapid succession on the islands themselves. The large islands are connected by dams and bridges. Hamilton is the home port of numerous cruise lines and luxury yachts . The Bermuda Railway operated on the island from 1931 to 1948 . The power grid in Bermuda is similar to that in the USA. This applies to the voltage , 110 V, as well as to the sockets and plugs of the end devices.

Only one car is allowed per property on the islands. Tourists can choose between bicycles, buses, taxis, horse-drawn cabs and motor scooters (national vehicle of the Bermuda Islands) - there is no commercial car rental. All of Bermuda has a speed limit of 35 kilometers per hour for both cars and scooters. However, hardly any resident adheres to it, and the police only issue a parking ticket from 50 km / h.

British tradition is maintained in the Bermuda Islands . This can be seen, for example, in numerous military parades , in the dress uniforms , in the "Old England" setting of the villages and in the kitchen . Bermuda National Day is May 24th.

The Bermuda Race has existed since 1906 , a 647 nautical mile long ocean regatta from Brenton Reef near Newport (Rhode Island) to Hamilton, expanded in 1964 by the Onion Patch sailing regatta series . In June 2017 , the America's Cup was held in Bermuda. The sports rugby and cricket are also popular because of their history. The national cricket team took part in the 2007 Cricket World Cup .