This article covers coasts. For coast as a name for the ship bridge (Flensburg) see there. For more meanings, see The Coast (disambiguation) . 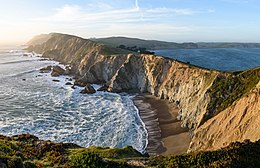 The border area of ​​the mutually influencing ecosystems of land and sea is called the coast . Depending on the shape of the coast, this space varies in width. On flat coasts (e.g. the North Sea coast) it can sometimes extend over more than 100 km.

The bank edge , commonly known as the coastline , is determined by the line of the mean water level . For tidal coasts this is the line of mean tidal high water .

Seen over time, the coast is subject to constant change. The spatial location is influenced by a variety of factors. These include u. a. Changes in sea level, changed currents, changes in salinity. Every change can of course be conditioned, but it can also be caused by the spatial use of the coastal area by humans. The physical processes include, on the one hand, eustatic sea level fluctuations , but also isostatic increases and decreases. The anthropogenic factors include, for example, structural changes on land (e.g. dyke construction), as well as the economic uses on both sides of the bank. Here are u. a. to call:

The main types of coast

Flat coast and cliff in California

A clear classification into coastal types is difficult. Coasts can be divided according to various criteria, for example

There may be overlaps. Some types of coast are briefly explained below.

Bay coasts are created when a sea reaches far into the land. They were created by the rise in sea level after the last glacial period . Good examples of this are long stretches of the Baltic Sea coast and the North Sea coast .

The coastal forms of the Baltic Sea are mainly a result of ice age glacier movements and post-Ice Age elevation ( isostasy ) in the northern and subsidence in the southern area of ​​the Baltic Sea, which continue to this day. Furthermore, the coasts are influenced by their location in the westerly wind zone, which means that sediments are constantly drifting through the currents from the west . Formative coastal types are the fjord coast , the lagoon coast , the compensation coast and the fjord- archipelago coast .

The coast of the North Sea is largely influenced by post-glacial eustatic (glacier melting) and isostatic (land uplift) fluctuations in sea level, individual storm surge events and the tides . The mudflat coast with its typical barrier islands is characteristic of the North Sea coast . It extends from West Friesland to East Friesland to North Friesland, i.e. from the Dutch island of Texel to the Danish fishing port of Esbjerg. Land reclamation and coastal protection measures ( Lahnungen , dikes ) shape the coastal landscape. Another form of the coast, the steep coast, characterizes the island of Helgoland , for example .

Mountain ranges parallel to the coast, rich in bays. They emerged after an area higher up to the sea was broken off.

A tectonically conditioned form of the ingression coast , the beach line of which was lowered below the recent sea level as a result of the tectonic subsidence of the land mass. The distinction between tectonically induced uplift and eustatic sea level fluctuations is problematic. 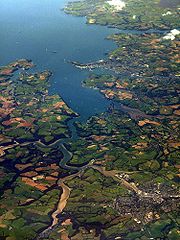 A Riyal coast is a type of coast with a narrow and long sea bay penetrating deep into the land. The Riyal Coast is created by the rise in sea level. The flooding of river valleys creates deep bays. In contrast to fjord coasts, the Riyal coasts are not glacial, but fluvial (by a river). There are often numerous islands in front of it. Riyal coasts can be found in northwestern Spain ( Galicia ), Ireland , Cornwall , Brittany ( Gulf of Morbihan ) and Corsica .

The canal coast is a mountain range running parallel to the coast that has sunk into the sea due to the rise in the sea (eustasia). The anticlines run parallel. A good example of the canal coast is the Dalmatian coast on the Balkan Peninsula .

Archipelagos formed during the Ice Age when glaciers ran over rocky landscapes and these either abraded or partially ground up. This explains the two different forms of the archipelago that can be found today. Some of them are relatively flat on the surface, some of them have scratches from rocks that the glacier has pushed over them. The others are marked by a jagged surface, which is due to the fact that the glacier caused mechanical damage here by tearing out entire parts of the rock by freezing to it beforehand (detraction). In Europe, archipelagos can only be found in Norway, Sweden and Finland. Due to the existing shape of the coast, no skerries could develop on Denmark's coasts. The rocky subsoil as in the rest of Scandinavia was missing.

The mangrove coast, quasi the "Wadden coast of the tropics", only exists in the tropics. A characteristic feature is the strong vegetation with stilt roots, which could arise here due to a larger tidal range.