This article deals with sea level fluctuations - for the stability of landscape ecosystems see Eustasy (ecology) .

Illustration of the relationship between eustasia, isostasia and relative sea level. 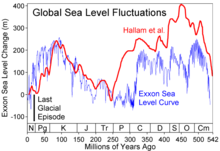 Two reconstructions of the curve of the eustatic sea level from the Cambrian (right) to today (left). The black bar at the bottom left illustrates the range of eustatic sea level fluctuations during the Pleistocene (moved away from the left edge for better readability).

The term "eustatic movements" comes from the Austrian geologist Eduard Suess (1888), who used it to describe the advancement and retreat of the coastlines in geological time periods. As a cause for the receding of the coastlines ( negative eustatic movement ), combined with gaps or the widespread distribution of continental sediments in the geological tradition of the corresponding period, he cited the sinking of the sea basins. The advancement of the coastlines, combined with the expansion of marine sediments in the geological tradition of the corresponding period ( transgression or positive eustatic movement ), he explained with the gradual filling of the previously sunken sea basins with sediments and the resulting displacement of water.

Today, eustasia or eustatic sea level fluctuations are defined as fluctuations in the sea level relative to a fixed point not influenced by geological processes, the latter usually being the center of the earth .

Two main factors are considered to be the causes of eustatic sea level fluctuations:

It should be added that, in principle, none of the mechanisms listed below work on their own, but that they overlap each other, which can lead to reinforcing or weakening effects.

One of the best-known examples of the effects of the Pleistocene glacial eustasia: the falling dry or the flooding of the Bering Strait (animation).

The most important mechanism for this is the binding or release of water in or from continental ice sheets , also known as glacial eustasia or glazio-eustasia . This can lead to sea level fluctuations on the order of 10 to 100 meters within 1,000 to 100,000 years.

During the last global glaciations in the Pleistocene , large amounts of water from the hydrosphere were bound in the inland ice of the northern hemisphere. As a result, the sea level was up to 130 m lower than today. The release of the water masses bound in the ice during the most recent Pleistocene glaciation (referred to as Northern and Northern Central Europe called the Vistula Glacial Period ) led u. a. in today's North Sea basin , which was dry during the Ice Age, to the rise in sea level. This regional event with a glacioeustatic background is known as the Flemish Transgression . Even today, there are enormous amounts of water in the ice sheets that cover Greenland and the Antarctic continent. A complete melting of these ice caps would lead to a eustatic rise of about 73 meters.

Less dramatic fluctuations cause the volume expansion or shrinkage of the seawater body by changing the water temperature (so-called thermostatic fluctuations ; the warming of the entire water body of the world's oceans by 1 ° C results in a eustatic sea level rise of 70 cm) and the binding or release of water on the continents in or out of groundwater reservoirs and surface waters (a few meters in periods of 100 to 10,000 or 100,000 years)

The sea ​​level rise that is currently taking place is primarily attributed to glacioeustatic and thermosteric effects.

The paleogeographic world map for about 90 mya ( Turonium ) shows the extremely high sea levels worldwide at this time.

The entry of sediments into the ocean basins, assumed by E. Suess to be the main factor behind the rise in eustatic sea levels, is actually only responsible to a very small extent for the change in volume of the ocean basins. Its influence on the eustasia is a maximum of a few tens of meters of sea level fluctuation over a period of a few tens of millions to a few 100 million years.

For most of the past 500 million years, the Earth did not have large continental ice sheets, which is why Tektono-Eustasia is likely to be the dominant geological factor for significant global sea level fluctuations. A history of earth with the highest global sea level was the early Cretaceous (in the literature often Mid-Cretaceous , " middle Cretaceous ," called). It is assumed that the eustatic sea level was 100 meters and more above today's level, which cannot be explained solely by the melting of the continental ice sheets, especially since the earth was in a greenhouse climate phase throughout the Mesozoic Era, meaning that there were no major inland ice masses anyway may have been. Instead, an increased ocean floor spread rate is assumed to be the cause.

This phenomenon, also referred to as eustasia , does not affect global sea level, but the distribution of seawater in the ocean basins depending on the gravity anomalies of the earth's body, which results in slightly higher sea levels in areas with a positive gravity anomaly and slightly lower sea levels in areas with a negative gravity anomaly Has. Since the earth's gravitational field is not only regionally different in strength, but also changes for various reasons in geological time periods, the distribution of positive or negative gravity anomalies on the earth's surface also changes and, accordingly, geoidal-eustatic sea level fluctuations occur in the oceans There are also regional differences as to whether the sea level rises or falls. From this it follows in turn that z. B. glacio- and tectono-eustatic sea level fluctuations cannot actually be globally uniform, but regionally, depending on how the regional gravitational field develops in the period under consideration, stronger or weaker.

The rapid melting of continental ice sheets leads to an increase in the volume of the water body of the world's oceans, but in the region that is cleared of the ice it also leads to a sinking of the geoid (i.e. to a negative gravity anomaly), since the isostatic crustal movements, through which the loss of mass is compensated (the so-called postglacial uplift ), proceed significantly more slowly than the melting. This in turn results in a regional geoidal-eustatic sea level drop, which weakens the glacial-eustatic rise there and intensifies it in the vicinity of the equator.

With an increase in the amount of water in the oceans, which is essentially caused by glacial eustatic effects, there is an isostatic lowering of the seabed, an effect known as hydro-isostasis . In return, the continents are rising by twice the amount of subsidence of the ocean floors. This can manifest itself in clear differences in the sediment tradition of oceanic islands and continental shelves, since the former participate in the hydro-isostatic subsidence of the ocean floors, while the latter experience an uplift.

The eustatic, globally changing sea level is offset by the so-called relative sea level. The term applies only to sea-level changes in regional or local scale and plays in particular in the sequence stratigraphy an important role, where he alternatively as accommodation space (ger .: accomodation space is called). It is not "measured" relative to geologically stable fixed points, but rather relative to an arbitrarily determined area within the earth's crust (English: local datum ), which z. B. can be the surface of the basement of a sedimentary basin . It is therefore the sea level that can be read directly from the regional or local sediment tradition, which is influenced both by the various forms of eustasia and by regional tectonics (essentially the elevation or lowering of the deposit area) (see also →  transgression , →  ingression and →  regression ). Real eustatic fluctuations can only be identified by a supra-regional comparison of sediment sequences from a certain geological time period. Another important difference to eustasia is that the sedimentation rate has a very significant influence on the relative sea level, whereby, in contrast to eustasia, strong sedimentation does not lead to a rise but to a fall in the sea level, i.e. H. leads to a retreat of the coastline or at least a decrease in water depth in the deposit area under consideration (see also →  Landing ).

The investigation of “Middle Cretaceous” sediment sequences showed that the relative sea level at that time was locally up to 250 meters above today's value. It is therefore assumed that a generally increased subsidence of the continents in the course of the last phase of the breakup of the Pangea played a certain role in the flooding of further continental areas in the early Upper Cretaceous .

The sea level fluctuations in the Baltic Sea in the past 10,000 years are also fluctuations in the relative sea level and are not solely due to eustatic factors. The supply of sediment by the flowing rivers and neotectonics (tectonic movements that are generated by the currently prevailing crustal tension field in the corresponding crustal area) and other factors play an important role. In addition, Scandinavia rises a few millimeters per year after the ice masses of the last glacial period (postglacial uplift, see →  Geoidal Eustasia ), which leads to a retreat of the sea on the northern Baltic coast.