This article deals with the concrete effective gravity field, especially by a celestial body. For the pure gravitational effect see gravitational field

A plumb line shows the direction of the gravitational field

is a vector quantity with magnitude and direction. The direction is called plumb direction . The amount is also called the location factor to emphasize that and thus also the weight of a body depends on the location. In Germany the acceleration due to gravity is about 9.81 m / s² = 981  Gal . The variation over the earth's surface is a few Gal.

In celestial mechanics , non-rotating reference systems are often used. The gravitational field of one or more celestial bodies is then based only on gravitation.

In addition to the direct measurement of the acceleration of a freely falling body, the amount of gravitational acceleration can be calculated from the period of oscillation of a pendulum . A modern gravimeter is a special spring scale and achieves a precision of one microgale, approx. 10 −9  g . You could register a height shift of less than one centimeter. However, fluctuations in air pressure also cause changes of the same order of magnitude, and tidal accelerations due to the inhomogeneity of the external gravitational fields, especially those of the moon and sun, even change g by many milligals.

Sum of gravitational and centrifugal acceleration

Since the weight of a conservative force , the gravitational acceleration as an appropriate field strength of the negative is gradient of a potential U , . In the physical geodesy but not underground , but W  - = U used and W despite different in sign gravity potential (in the earth also Geopotential called). With this convention is

The gravitational potential is composed - similar to the acceleration due to gravity itself - from a gravitational and a centrifugal component,

The first term is the gravitational potential in the general form for an extended body with the density distribution . For a radially symmetrical body of mass M , it is simplified to in the outer space . This contribution disappears in infinity. The second summand, the form of which assumes that the origin of the coordinate system lies on the axis of rotation, is the potential of the centrifugal acceleration . It can also be written as with the distance from the axis of rotation . This contribution disappears in the origin. Since both summands never become negative, W only takes positive values. 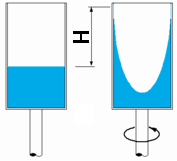 Water in a rotating bucket. As soon as it rotates smoothly, its surface forms a potential surface.

The earth's gravitational potential W is also called geopotential . A particularly important level surface here is the geoid , on which the gravity potential determines the value

accepts. The value mentioned here is known as the "conventional geoid potential". It is used, among other things, in the definition of International Atomic Time , by the International Service for Earth Rotation and Reference Systems and by the IAU to define Terrestrial Time . It is the best measured value known in 1998. However, more recent measurements show a value for W 0 which is about 2.6 m² / s² smaller , which corresponds to a height difference of 26 cm. Potential differences are often related to W 0 ,

Large celestial bodies take on a shape under the influence of their gravitational field, which corresponds to one of the level surfaces. In the earth's gravitational field , the level surface that roughly follows the height of sea level is called the geoid . It is slightly flattened by the centrifugal acceleration . This flattening and the decrease in the acceleration due to gravity (acceleration due to gravity on earth) with altitude are taken into account by normal gravity formulas. In addition, there are gravity anomalies, i. H. global, regional and local irregularities, as the mass is not evenly distributed both in the earth's crust (mountains, continental plates ) and deeper (in the earth's mantle and core ). The satellite geodesy determines the geoid with the help of the observation of satellite orbits , see gradiometry . The gravity anomalies reach the order of magnitude 0.01% and 0.01 ° in terms of amount or direction, see deviation from the perpendicular , gravity gradient and vertical gradient . There are up to 100 m between the geoid and the central ellipsoid.

Due to the centrifugal force, the flattening of the earth and the elevation profile, the value of the gravitational acceleration varies regionally by a few per thousand around the approximate value 9.81 m / s². The acceleration due to gravity is 9.832 m / s² at the poles and 9.780 m / s² at the equator. The attraction at the pole is about 0.5% greater than at the equator. If the gravity on a person at the equator is 800 N, it increases to 804.24 N at the earth's poles. In 2013 it was determined that the acceleration due to gravity was 9.7639 m / s² on the Nevado Huascarán mountain in the Andes (highest mountain in Peru ) is the lowest.

In 1901, at the third general conference for weights and measures, a standard  value, the normal acceleration due to fall , was arbitrarily set at g n = 9.80665 m / s², a value that had already been established in various state laws and that serves to define technical units of measurement (DIN 1305) . The basis was measurements by G. Defforges at the BIPM near Paris (outdated from today's perspective) , extrapolated to 45 degrees latitude and sea level.

In Germany, the location-dependent acceleration due to gravity is recorded in the German Main Gravity Network 1996 ( DHSN 96 ) , which is a continuation of the (West German) DHSN 82 . In addition to the German main triangular network for the location and the German main height network for the height, it is the third variable for the unambiguous definition of a geodetic reference system. The German gravity network is based on around 16,000 measuring points, the gravity fixed points.

Historically significant was the value 9.81274 m / s² in Potsdam, determined by Kühnen and Furtwänger from the Potsdam Geodetic Institute in 1906. In 1906, Potsdam became the fundamental point for determining the local acceleration due to gravity using difference determination until the International Gravity Standardization Net was introduced in 1971.

With the introduction of the integrated spatial reference in 2016 , the DHSN 96 was replaced by the DHSN 2016 .

Earth's gravity field in the interior of the earth

Gravitation in the interior of the earth according to the seismic PREM -Earth model, as well as approximations by constant and linearly increasing rock density for comparison.

If the earth were a non-rotating, homogeneous sphere, there would be a linear increase in gravitational acceleration from zero at the center of the earth to a maximum on the earth's surface. In fact, the earth is built up in layers of very different densities. Therefore, the relationship between depth and gravitational acceleration is more complicated. In the earth's core , the acceleration due to gravity initially increases uniformly with the distance from the center of the earth. At the core-mantle boundary (approx. 2900 km from the center of the earth), also known as the Wiechert-Gutenberg discontinuity after their discoverers Emil Wiechert and Beno Gutenberg , it reaches a maximum of almost 10.68 m / s². This effect is due to the fact that the predominantly metallic core of the earth is more than twice as dense as the earth's mantle and crust . From there up to approx. 4900 km it first slowly decreases again to 9.93 m / s², increases again at 5700 km to 10.01 m / s² and then decreases monotonically until it is about 9.82 m on the earth's surface / s² reached.

Earth's gravitational field outside the earth

In the vicinity of the earth's surface, g decreases by about 3.1 µm / s² for every meter increased. In meteorology, the geopotential in the atmosphere is given as equipotential surfaces . In practice, main pressure areas have been defined (1000, 500, 200 hPa, and others).

Outside the earth, the gravitational field decreases proportionally to the square of the distance from the center of the earth, while at a constant position in terms of latitude and longitude, the centrifugal acceleration increases proportionally with this distance. The earth's gravitational field is therefore (like the gravitational field of every celestial body) in principle unlimited, but it quickly becomes weaker with increasing distance. At low satellite altitudes of 300 to 400 km the acceleration due to gravity decreases by 10 to 15%, at 5000 km by approx. 70%. At an altitude of almost 36,000 km, both influences cancel each other out exactly. As a result, a satellite moves in such a geostationary orbit exactly synchronized with the rotation of the earth and remains at the same longitude.

Stars and other gas or plasma bodies have a non-trivially defined star surface , on which their surface acceleration can be specified. This depends not only on its mass, but also on its density. A giant star has a much larger star radius , which means that its surface acceleration is smaller than that of the sun.