If one neglects gravity anomalies (e.g. due to mountains) and different flattening, the geoid would be like an ellipsoid of revolution (thick curve). Its shape results from the interplay of gravity / gravitation and centrifugal force. The perpendicular direction is also a resultant of these two forces and would then be like a normal correspondingly perpendicular to this ellipsoid of revolution.

Due to gravity anomalies in the earth and different flattening in the northern and southern hemisphere, there is a vertical deviation : Difference between the true vertical direction and a theoretical earth ellipsoid .

Mountains curve the perpendicular direction by up to 0.01 °. The plumb lines penetrate the geoid and all other level surfaces at exactly 90 ° 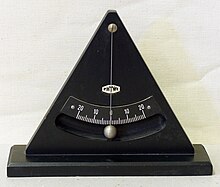 The perpendicular direction is the local direction of the gravitational acceleration , so it points " downwards ".

A straight line in the perpendicular direction at the location , also called vertical or perpendicular , shows the zenith upwards and the nadir downwards as the two points of intersection with the celestial sphere . A straight line or plane at right angles to this is called a horizontal , also horizontal or horizontal . A horizontal plane at the position of the observer is the mathematical horizon (see also tangential plane ).

From a physical point of view, the vertical direction in the gravitational field of the rotating earth is a consequence of gravity and - to a lesser extent - centrifugal force . Therefore it usually does not point to the center of the earth . The rotation (and the resulting centrifugal force and flattening ) causes a deflection that is up to 0.2 ° on Earth and almost 10 ° on Saturn. This amount which is geocentric latitude (with ( psi )) is smaller than the geographical ( , ( beta ) or ( phi )).

More precisely, the perpendicular direction is not a straight line, but a space curve . As a plumb line, it penetrates all level surfaces of the gravitational field orthogonally . The plumb line curvature can be determined by complex measurements (see gravimetry or gradiometry ) or by calculation by modeling the masses of the terrain (topography) and the geological subsurface. The curvature is about 1 ″ in the lowlands , but more than 10 ″ in the high mountains , which is about 0.5 cm (lowlands) to over 5 cm (high mountains) per kilometer.

Precise values ​​for astronomical latitude and longitude can be determined from the vertical direction or the position of the zenith in the starry sky . The difference to the geographical latitude and longitude is the so-called vertical deviation , which is caused by the irregularities of the earth's gravity field. They form an important coordinate system for the geosciences - especially geodesy .

The perpendicular direction is measured :

“Plumb line” is derived from the plumb line, “vertical” from plumb line, “horizontal” presumably from “scales” as a synonym for a water surface in equilibrium - see also spirit level as the original measuring device for this purpose. “Horizontal” refers to the level of the horizon and also has to do with distance vision . In medicine, vertical refers to the line that runs from the top of the head to the sole. "Vertical" comes from the Latin ( vertex " vertex (point)"; the same meaning is based on the "zenith").