The title of this article is ambiguous. Further meanings are listed under Terrain (disambiguation) .

The terrain , also relief , terrain or topography , is the natural surface of the earth with its heights, depths, irregularities and shapes.

A graphical representation of the terrain is in large scale plan of the grounds mentioned at smaller scales (eg. 1: 5000), however, basic (Germany) and basemap (Austria) and from about 1: 20,000 topographic map .

The terrain thus corresponds to the earth's surface , without the objects located on it (geographical situation ) , also without the water bodies of the waters , i.e. it includes the entire land area , in a broader sense also the bottom of the waters ( beds of fresh waters, seabed ). According to this definition, the ocean floor is the submarine terrain, but oceanography also calls the small irregularities in the sea ​​level the sea ​​topography .

In a broader sense, terrain also refers to the surfaces of other celestial bodies .

Their measurement and research is the subject of geosciences :

Small-scale structures of the land surface are called terrain forms or terrain formations , also called earth forms or land forms . They are a geomorphological phenomenon , the natural shape ( landscape ) of a terrain or part of a landscape , e.g. B. Mountains, valleys, dunes, rock formations.

They are worked out descriptively and typologically by geomorphography , their surveying is called a survey of the terrain .

In general, two axes can be set up for a plane element and the curvature measured along the axes (main curvatures ) - depending on the direction, the element is plane, convex or concave along one or both of the axes . The following basic elements of the topography (relief elements) result from the predominant character :

In addition to arching and basic shape, information about inclination and exposure as well as other geoscientific meta information such as material, soil quality, vegetation and development and others are added as geomorphographic form elements .

By structural lines , the terrain can be divided. A distinction is made between rib lines (soft edges) and break lines (hard edges). The ridge lines include the back and trough lines .

A topline is the highest line along a ridge or an elongated bulge. Ridge lines usually represent watersheds : the rainwater flows into the right or left slope. Particularly distinctive ridge lines in high mountains are called ridge lines .

Trough or valley lines are the deepest lines in the course of a trough or valley. They represent the water collectors, where the water flowing down from the slopes converges and continues along a line that follows below. In troughs these lines are not always clearly defined, but in a valley they are defined by the slope of the valley floor in the same direction , where the river usually runs.

A breakline is a kink in the terrain. The gradient changes abruptly at break lines, and the contour lines kink at these lines on the map . A particularly distinctive shape of the break edge is the break edge , which can run almost vertically. In the map, the contour lines are more or less on top of each other, but then usually merge into a steep slope .

A survey of the terrain is understood to be the metrological recording of the forms of the terrain (the border survey , on the other hand, is the task of the cadastre , the legal security that of the land register ).

When measuring manually, the terrain is recorded in a structured manner based on the distinctive shapes. The measurements are compressed in a profile-like manner between the distinctive points and lines.

With automatic detection, a large number of points have to be measured so that the distinctive shapes are also recorded.

A special feature is the direct acquisition of contour lines in the measuring table method with the tilt rule or in the case of manual evaluation in aerial photo photogrammetry .

The representation of the terrain in maps is the task of cartography . For this terrain representation special methods have been developed since the 18th century, by the cavalier perspective (on construction and floor plans with elevation data quoted projection ) to the Schraffenkarten of the 19th century to modern layers lines -Kartierung with shading , card signatures Felszeichnung related and Forms of representation are sufficient. Newer terrain surveys are usually saved directly in databases , processed and illustrated in digital maps. 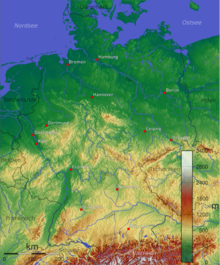 In addition, the site is linked to numerous other geoscientific aspects, from names ( toponomics ) to complex contexts. These are shown in general maps, special maps and modern geographic information systems .

The terrain is often represented on maps as follows:

On a large scale

On a small scale