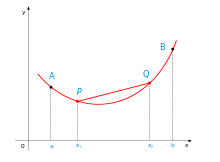 Example of a convex function

Example of a concave function

In analysis , a real-valued function is called convex if its graph lies below every connecting line between two of its points. This is equivalent to the fact that the epigraph of the function, i.e. the set of points above the graph, is a convex set .

A real-valued function is called concave if its graph lies above each line connecting two of its points. This is synonymous with the fact that the hypograph of the function, i.e. the set of points below the graph, is a convex set.

One of the first to study the properties of convex and concave functions was the Danish mathematician Johan Ludwig Jensen . Jensen's inequality named after him is the basis of important results in probability theory , measurement theory and analysis.

The special importance of convex or concave functions is that they form a much larger group than the linear functions , but also have many properties that are easy to investigate and that enable statements about non-linear systems . For example, since every local minimum of a convex function is also a global minimum, they are important for many optimization problems ( see also: Convex Optimization ). Even for convex functionals that are defined on infinitely dimensional spaces, similar statements can be made under certain conditions. Therefore, convexity also plays an important role in the calculus of variations .

There are two equivalent definitions, on the one hand one can define convexity using an inequality over the function values ​​(analytical definition), on the other hand using the convexity of sets (geometric definition).

The epigraph of a convex function is a convex set

the geometrical definition of a concave function requires that the hypograph be a convex set.

A function is called strictly convex or strictly convex if the inequality of the analytic definition holds in the strict sense; that is, for all elements from , and all rule,

A function is called strongly convex with parameter

or -convex , if for all and it holds that

Strongly convex functions are also strictly convex, but the converse is not true.

, where is increasing and only disappears at 0 if for all and the following applies:

If you choose with , you get the inequality for strong convexity. 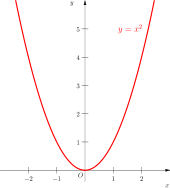 The norm parabola is convex

is an example of a convex function on a multidimensional real vector space.

Essential statements on convex and concave functions can be found in Otto Hölder's work as early as 1889 , although he did not yet use the terms commonly used today. The terms convex and concave function were introduced by Johan Ludwig Jensen in 1905 . Jensen, however, used a weaker definition that can still be found occasionally, especially in older works. In this definition only the inequality

provided. As Jensen showed, however, the inequality used in today's definition for continuous functions follows from this

for all between 0 and 1. ( see also: section convexity and continuity )

Real-valued functions that satisfy the weaker inequality ( ) mentioned above are called Jensen-convex or J-convex for short , in honor of Johan Ludwig Jensen .

Linear functions are the only functions that are both concave and convex.

The cubic function is in a very considered concave not convex yet. The interval of all positive real numbers is strictly convex. The function that is additively inverse to it is therefore strictly concave there.

Since is an odd function , that is, it follows that it is strictly concave in the range of all negative numbers.

In the case of a convex function, all sub-level sets, i.e. sets, are of the form

convex. In the case of a concave function, all suplevel sets are convex.

For concave functions, the inequality applies in the opposite direction.

Reduction to convexity of real functions

For or , the inequalities from the definitions of (strict) convexity and concavity are reversed. For example, be a function that is convex. For points and from then applies

are convex all over , the norm parabola is even strictly convex. It follows that all functions of form

with strictly convex on whole . This is also vividly clear, these are upwardly curved parabolas. The product of the functions and is the cubic function , which ( considered over all ) is not convex.

for all so is also a convex function. The transition to the function shows that the infimum of a set of concave functions (if it exists) is also a concave function again. However, the formation of the infimum does not necessarily acquire convexity (and conversely, the formation of the supremum does not necessarily acquire concavity), as the following example shows.

About the composition of two convex functions and no statement can meet in general. However , if it is also true that there is a monotonous increase , then the composition is also convex.

Furthermore, the composition of a concave function with a convex, monotonically decreasing real function is in turn a convex function.

If an invertible and convex function is defined on an interval, then it follows from the convexity inequality

Let be a monotonically increasing function . Then the above inequality is reversed when applying . The following applies:

For a monotonically falling and convex function , however, the following applies

For an invertible monotonically falling and convex or concave function, the inverse function therefore has the same type of convexity.

has no global minimum

There are analogous statements for a continuous function on a reflexive Banach space : A continuous convex functional on the compact set assumes a minimum there. If the functional is strictly convex, the minimum is unique.

Geometry of the optimal value sets

In topological vector spaces (which are almost always given) one can also investigate local minima. The following applies:

This can be shown directly with the defining inequalities of convex and concave functions.

For differentiable convex functions, to determine the extreme values, use is made of the fact that convex functions are globally underestimated at every point by the tangent at this point. It applies , where denotes the standard scalar product. If the gradient is now zero at one point , then for all and thus is a local (and thus global) minimum. Analogously, with concave functions there is always a local (and thus global) maximum at a point if the gradient or the derivative at this point disappears.

If one assumes the continuity of a real function , the condition that the following inequality holds for all of the definition interval is sufficient to show its convexity :

This corresponds to Jensen's definition of convexity. Conversely, every function defined on an interval that satisfies the above inequality is continuous at the inner points . Discontinuities can occur at most in edge points, like the example of the function with

shows, which is convex, but has a discontinuity at the edge point .

Thus, the two ways of defining convexity are equivalent, at least for open intervals. To what extent this result can be transferred to general topological spaces is dealt with in the following two sections.

In this context the Bernstein-Doetsch theorem should be mentioned, from which the following result can generally be obtained:

If des is a real-valued function for a convex open subset , then it is both Jensen-convex and continuous if and only if for every two points and every real number the inequality is always

A weaker definition of convexity

A continuous function on a convex subset of a real topological vector space is convex if there is a fixed one with , so that for all , from :

This can be shown by means of suitable interval nesting. A fully executed evidence is in the evidence archive .

That continuity is required in this weaker definition of convexity can be seen from the following counterexample.

Limitation and continuity in standardized spaces

Formally, however, the proof is somewhat more complicated. A complete version is in the evidence archive .

From this statement it follows that this functional equation has a unique solution if it is additionally required that it is bounded.

Convex functions , which are defined on a subset of a finite-dimensional real vector space , are continuous in the interior points. To see this, consider an internal point . For this there is a simplex with the corner points , which again contains as an inner point. But every point is in the form

and representable for everyone . According to those inequality, the following applies

is therefore bounded upwards to and thus, as shown above, continuous at the inner point .

In the infinite-dimensional case, convex functions are not necessarily continuous, since there are in particular linear (and thus also convex) functionals that are not continuous.

A convex or concave function defined on an open interval is locally Lipschitz continuous and thus, according to Rademacher's theorem, differentiable almost everywhere . It can be differentiated in every point on the left and right .

Derivation as a convexity criterion

The first derivative can be used as a convexity criterion in two ways. Is a continuously differentiable real function

Alternatively, is a differentiable function if and only

In the case of a function, it simplifies to .

Consider the logarithm as an example . It is continuously differentiable on the interval with derivative .

After the first convexity criterion, the derivation must now be examined for monotony. Is and , so is , since the numerator and denominator are really positive. Thus is strictly monotonically falling and consequently is strictly concave on .

After the second criterion of monotony, one checks for

But since for is, the inequality holds if is and are. So the logarithm is strictly concave on .

Looking at the function

so all partial derivatives are continuous and holds for the gradient

To check the first convexity criterion, one forms for

since the quadratic terms are always really positive, the positivity of the terms follows from the monotony of the exponential function. The function is therefore strictly monotonic, i.e. also strictly convex.

The graphs of differentiable convex functions lie above each of their tangents . Similarly, concave functions are always below their tangents. This follows directly from the second convexity criterion. This can also be interpreted in such a way that the Taylor expansion of the first degree always globally underestimates a convex function. From these properties, for example, the generalization of the Bernoulli inequality follows:

Further statements can be made for a function that can be differentiated twice . is convex if and only if its second derivative is not negative. Is consistently positive, i.e. always curved to the left , then it follows that it is strictly convex. Analogous to this is concave if and only if applies. If it is consistently negative, i.e. always curved to the right, it is strictly concave.

In essence, the second-order convexity criteria are based on checking the monotony of the derivation using monotony criteria, which in turn are based on differentiability.

The function with is convex because it applies to everyone . In fact, it is strictly convex, which proves that strict convexity does not imply that the second derivative is positive ( has a zero at 0).

The function considered above is twice continuously differentiable with a second derivative for all . So the function is strictly concave.

Looking at the function

so is her Hessian matrix

It is positive definite because all of its intrinsic values ​​are genuinely positive. So it is strictly convex.

A non-empty, closed subset of a real normalized vector space is convex if and only if the through

The same property applies not only to subsets of , but also in general to subsets of CAT (0) spaces , in particular of Riemannian manifolds of non-positive section curvature . The convexity of the distance function is an important tool when studying non-positively curved spaces.

For functions in finite-dimensional vector spaces

holds for all and from the convex set . Here is a positive cone on .

In relation to reference systems