In mathematics , a convex cone is a cone that is closed under linear combinations with positive coefficients (also called conical combinations ). Convex cones play an important role in conical optimization . 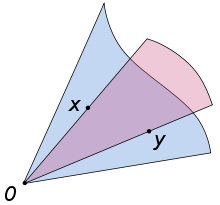 A convex cone (light blue). The violet set represents the linear combinations α x + β y with positive coefficients α, β> 0 for the points x and y . The curved lines on the right-hand edge should indicate that the areas are to be extended to infinity.

Given is a set of a - vector space , where is an arranged body . Mostly is .

The set is a convex cone if one of the following definitions is true:

Cones over subsets of the sphere

For a subset of the unit sphere is called

Each cone is of the shape for .

The convexity of cones can be described by the following equivalent geometric definition describe: a cone is precisely then a convex cone, if the average with each great circle of the unit sphere contiguous is.

is. A cone is a polyhedral cone if and only if it is generated by a finite set of vectors .

A cone is called regular if

The automorphism group of a cone is

A cone is called homogeneous if the automorphism group acts transitively on .

It is called symmetric if there is an involution for each with the only fixed point. Symmetrical convex cones are always homogeneous.

A cone is called reducible if its shape

with is, otherwise irreducible .

The too dual cone is defined as . This definition can also be formulated analogously for vector spaces with a scalar product over an arranged body.

A cone is called self-dual if is.

The set of quiver Vinberg states that the construction of the positive taper produces a bijection between formal real Jordan algebras and symmetrical convex cones.

The irreducible symmetric convex cones in are given by the following list: