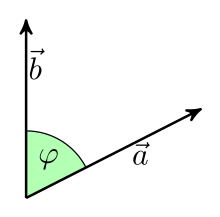 The scalar product of two vectors in Euclidean intuition space depends on the length of the vectors and the included angle.

The scalar product (also inner product or point product ) is a mathematical combination that assigns a number ( scalar ) to two vectors . It is the subject of analytical geometry and linear algebra . Historically, it was first introduced in Euclidean space . Geometrically calculating the scalar product of two vectors and according to the formula

And denote the lengths (amounts) of the vectors. With is the cosine of the angle enclosed by the two vectors . The scalar product of two vectors of a given length is therefore zero if they are perpendicular to one another and maximum if they have the same direction.

In a Cartesian coordinate system , the scalar product of two vectors and is calculated as

If you know the Cartesian coordinates of the vectors, you can use this formula to calculate the scalar product and then use the formula from the previous paragraph to calculate the angle between the two vectors by solving it for :

Vectors in three-dimensional Euclidean space or in the two-dimensional Euclidean plane can be represented as arrows. In this case, filters arrows parallel have the same length oriented, and equal to, the same vector. The dot product of two vectors , and is a scalar, that is a real number. Geometrically, it can be defined as follows:

And denote the lengths of the vectors and and denotes the angle enclosed by and , so is

Instead of writing occasionally in this case

Other common notations are and

Orthogonal projection of the vector on the direction determined by

To illustrate the definition, consider the orthogonal projection of the vector on the direction given by and set

Then and for the scalar product of and we have:

This relationship is sometimes used to define the scalar product.

In all three examples, and . The scalar products result from the special cosine values , and :

If you introduce Cartesian coordinates in the Euclidean plane or in Euclidean space, each vector has a coordinate representation as a 2- or 3-tuple, which is usually written as a column.

For the canonical unit vectors and the following applies:

It follows from this (anticipating the properties of the scalar product explained below):

In three-dimensional Euclidean space one obtains correspondingly for the vectors

For example, the scalar product of the two vectors is calculated

From the geometric definition it follows directly:

As a function that assigns the real number to every ordered pair of vectors , the scalar product has the following properties that one expects from a multiplication:

Properties 2 and 3 are also summarized: The scalar product is bilinear .

Amount of vectors and included angles

With the help of the scalar product it is possible to calculate the length (the amount) of a vector from the coordinate representation:

The following applies to a vector of two-dimensional space

You can recognize the Pythagorean theorem here . The same applies in three-dimensional space

By combining the geometric definition with the coordinate representation, the angle they enclose can be calculated from the coordinates of two vectors. Out

The lengths of the two vectors

Orthogonal projection of the vector on the direction determined by

Two vectors and are orthogonal if and only if their scalar product is zero, that is

The projection is the vector whose end point is the plumb line from the end point of to the straight line through the zero point determined by. The vector is vertical

If a unit vector (i.e., ist ), the formula simplifies to

Relation to the cross product

Another way of combining two vectors and multiplying them in three-dimensional space is the outer product or cross product. In contrast to the scalar product, the result of the cross product is not a scalar, but a vector again. This vector is perpendicular to the plane spanned by the two vectors and and its length corresponds to the area of the parallelogram that is spanned by them.

The following calculation rules apply to the connection of the cross product and the scalar product:

The combination of the cross product and the scalar product of the first two rules is also called the late product ; it gives the oriented volume of the parallelepiped spanned by the three vectors .

The dot product makes it possible to simply prove complicated theorems that talk about angles.

Proof: With the help of the drawn-in vectors it follows (The direction of is irrelevant.) Squaring the amount gives

In physics , many quantities , such as work , are defined by scalar products:

Example: A wagon of the weight is transported over an inclined plane from to . The lifting work is calculated

One takes the above properties as an opportunity to generalize the concept of the scalar product to any real and complex vector spaces . A scalar product is then a function that assigns a body element (scalar) to two vectors and fulfills the properties mentioned. In the complex case, the condition of symmetry and bilinearity is modified in order to save the positive definition (which is never fulfilled for complex symmetrical bilinear forms).

In general theory, the variables for vectors, i.e. elements of any vector space, are generally not indicated by arrows. The dot product is usually not denoted by a painting point, but by a pair of angle brackets. For the scalar product of the vectors and we write . Other common notations are (especially in quantum mechanics in the form of Bra-Ket notation), and .

An inner product or inner product on a real vector space is a positively definite symmetric bilinear form, that is, for and the following conditions apply:

A scalar product or inner product on a complex vector space is a positively definite Hermitian sesquilinear form that means for and the following conditions apply:

Standard scalar product in R n and in C n

The “geometric” scalar product in Euclidean space treated above corresponds to the special case. In the case of the -dimensional complex vector space , the standard scalar product for is defined

where the overline means the complex conjugation . In mathematics, the alternative version is also often used, in which the second argument is conjugated instead of the first.

The standard scalar product in or can also be written as a matrix product by interpreting the vector as a matrix ( column vector ): In the real case, the following applies

where is the row vector which results from the column vector by transposing . In the complex case (for the left semilinear, right linear case)

where is the row vector adjoint to Hermitian .

General scalar products in R n and in C n

More generally, in the real case, every symmetric and positively definite matrix is ​​defined by

a scalar product; likewise, in the complex case, for every positively definite Hermitian matrix, over

On the infinite-dimensional vector space of the continuous real-valued functions on the interval , the -scalar product is through

On the matrix space of the real - matrices is for by

defines a scalar product. Accordingly, in the space of complex matrices for by

This is possible because due to the positive definiteness is not negative. The triangle inequality required as a norm axiom follows from the Cauchy-Schwarz inequality

If so, this inequality can

be reshaped. Therefore, in general real vector spaces, one can also use

define the angle of two vectors. The angle defined in this way is between 0 ° and 180 °, i.e. between 0 and There are a number of different definitions for angles between complex vectors.

In the general case, too, vectors whose scalar product is zero are called orthogonal:

The scalar product can then be represented with the help of the basis: Do the vectors have the representation with respect to the basis

so in the real case

One denotes with the coordinate vectors

so it is true

where the matrix product provides a matrix, i.e. a real number. With the will row vector designated by transposition from the column vector formed.

In the complex case, the same applies

where the overline denotes complex conjugation and the line vector to be adjoint is.

If there is an orthonormal basis , that is, holds for all and for all, then the identity matrix and it holds

in the real case and