The title of this article is ambiguous. A description of the philosophy journal Analysis can be found under Analysis (journal) .

The Analysis [ anaːlyzɪs ] ( Greek ανάλυσις Analysis , German , Resolution ' , ancient Greek ἀναλύειν analýein dissolve') is a branch of mathematics whose basics of Gottfried Wilhelm Leibniz and Isaac Newton as a calculus developed independently. Analysis has existed since Leonhard Euler as an independent sub-area of ​​mathematics alongside the classic sub-areas of geometry and algebra .

The two bodies (the body of real numbers ) and (the body of complex numbers ), along with their geometric, arithmetic , algebraic and topological properties, are fundamental to all analysis . Central concepts of analysis are those of the limit value , the sequence , the series and, in particular, the concept of function . The investigation of real and complex functions with regard to continuity , differentiability and integrability is one of the main subjects of analysis. The methods developed for this are of great importance in all natural and engineering sciences . 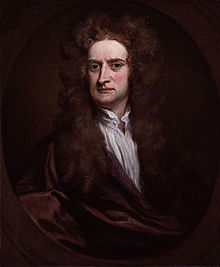 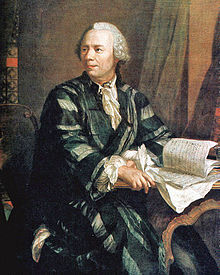 Analysis has developed into a very general, not clearly delineated generic term for a variety of areas. In addition to differential and integral calculus, analysis includes other areas that build on it. These include the theory of ordinary and partial differential equations , the calculus of variations , vector analysis , measurement and integration theory and functional analysis .

For a linear function or a straight line

and call this the derivative or the differential quotient of f in . The expression means that x is increasingly approximated, or that the distance between x and becomes arbitrarily small. We also say: " x goes against ". The name stands for Limes .

is the limit of the difference quotient .

There are also cases where this limit does not exist. That is why the term differentiability was introduced. A function f is called differentiable at the point when the limit value exists.

The integral calculus deals clearly with the calculation of areas under function graphs. This area can be approximated by a sum of partial areas and goes over into the integral in the limit value.

The above sequence converges if f satisfies certain conditions (e.g. continuity ). This clear representation (approximation by means of upper and lower sums) corresponds to the so-called Riemann integral that is taught in schools.

In the so-called higher analysis , further integral terms, such as B. considered the Lebesgue integral .

According to the main theorem of analysis, differential calculus and integral calculus are "inversely" related to one another in the following way.

If f is a real function continuous on a compact interval , then for :

and, if f is additionally differentiable to uniformly continuous,

Therefore, the set of all antiderivatives of a function is also referred to as the indefinite integral and symbolized by.

Example of a multi-dimensional function:

The terms of norm (as a generalization of the amount), convergence , continuity and limit values can easily be generalized from one dimension to several.

The differentiation of functions of several variables differs from one-dimensional differentiation. Important concepts are directional and partial derivatives , which are derivatives in one direction and one variable, respectively. The set of black determines when partial or directional derivatives of different directions may be reversed. In addition, the concept of total differentiation is important. This can be interpreted as the local adaptation of a linear mapping to the course of the multi-dimensional function and is the multi-dimensional analog of the (one-dimensional) derivation. The theorem of the implicit function about the local, unambiguous resolution of implicit equations is an important statement of multidimensional analysis and can be understood as a basis of differential geometry.

In multi-dimensional analysis there are different integral terms such as the curve integral , the surface integral and the space integral . However, from a more abstract point of view from vector analysis, these terms do not differ. To solve these integrals, the transformation theorem as a generalization of the substitution rule and Fubini's theorem , which allows integrals over n -dimensional sets to be converted into iterated integrals, are of particular importance. The integral theorems from the vector analysis of Gauss , Green and Stokes are important in multidimensional analysis. They can be understood as a generalization of the main theorem of integral and differential calculus.

Functional analysis is one of the most important areas of analysis. The decisive idea in the development of functional analysis was the development of a coordinate and dimension-free theory. This not only brought a formal gain, but also made it possible to investigate functions on infinite-dimensional topological vector spaces . Here not only the real analysis and the topology are linked, but also methods of algebra play an important role. Key methods for the theory of partial differential equations can be derived from important results of functional analysis, such as the Fréchet-Riesz theorem . In addition, functional analysis, especially with spectral theory , is the appropriate framework for the mathematical formulation of quantum mechanics and theories based on it.