The series converges towards 1

A series , seldom a sum sequence and especially in older representations also called an infinite series , is an object from the mathematical branch of analysis . A series is clearly a sum with an infinite number of summands . A series is precisely defined as a sequence whose terms are the partial sums of another sequence. If one counts the number 0 to the index set , the -th partial sum is the sum of the first (of the infinitely many) summands. If the sequence of these partial sums has a limit value , this is called the value or the sum of the series.

If any sequence is given, a new sequence of partial sums can be formed from it . The -th partial sum is the sum of the first terms of , its definition is:

There are different notations for rows depending on the context . This article uses the natural numbers, including zero , as indices for the terms of the sequence and series . In some applications it is advisable to only start the summation at index 1, 2 or higher; negative indices are rarely used (see Laurent series ). With the help of the sum symbol , the individual members of the series can also be abbreviated as

to be written. Proceed in the same way with the sequence of the individual members and write briefly

Often some or all of the indices are omitted to avoid misunderstandings. If, for example, in the context of calculations with infinite series, it is clear that numbering generally starts with 0, then it says

If and hence for all nonnegative indices i and n are defined thus be an infinite series form: if the limit of the sequence of partial sums

exists, it is said, the series converges; the limit S is called the sum of the series or the value of the series. This total can also be abbreviated as

Various convergence criteria can be used to determine whether a series is converging. 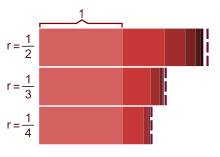 The geometric series for , or converges

A special geometric series is

According to the description given above, this notation denotes the limit value of the sequence

The convergence of this series can be visualized on the number line : Let us imagine a line with the length of two on which successive sections with the lengths of 1, 1/2, 1/4 etc. are marked. There is still room for one more section on this line, as there is still as much space as the last section was long: if we marked route 1/2, we have used a total of 3/2, so there is still room left 1/2 left. If we now delete 1/4, another 1/4 remains, etc. Since the “leftover piece” becomes arbitrarily small, the limit value is equal to 2.

Convergent geometric series are also a subject of Zeno's paradoxes .

On the other hand, the symbol represents the series as a sequence of the partial sums, regardless of the convergence behavior:

In contrast to ordinary (finite) sums, some of the usual rules of addition only apply conditionally to series. So you can not or only under certain conditions with them as with finite sum expressions.

Calculate within the series

The terms within a convergent series can be grouped together using brackets. So you can insert as many brackets as you like in the "infinite sum expression", you just can't put them within a term (composed of several terms). The value of the row then does not change due to the additionally inserted brackets.

This generally does not apply to divergent series, which can easily be seen in the following example.

diverges while the bracketed row

converges to zero and the series bracketed differently

converges to yet another number.

On the other hand, one can not easily clips away leave. But you can always do this when the resulting series converges again. In this case, the series value also remains unchanged. If the "less bracketed" series is convergent, you can add the same brackets to it again that you took away before, and the equality of the limit results from what has been said above if you swap the roles in it and the "less bracketed" series now as Look at the row to which brackets are added.

A rearrangement of a series is represented by a permutation of its index set. For example, if the index set is (as is usually the case) the set of natural numbers and a bijective mapping of the natural numbers to itself, it is called

a rearrangement of the series

Conditionally convergent series may only be reordered finitely, i.e. H. above a certain index must apply to the rearrangement .

A series is called absolutely convergent if the series of its absolute terms converges.

In finite-dimensional spaces the following applies:

A number is if and unconditional convergence if it is absolutely convergent.

For a conditionally convergent series, you can specify any number and then find a rearrangement of this series that converges to precisely this number ( Riemann rearrangement theorem ). In particular, you can not specify a number as a number, meaning that the series should diverge, and you will find a suitable rearrangement that does this.

In the following, the numbers are always real or complex numbers, and the series is defined as

If the series converges, then the sequence ( ) of the summands for towards 0. Formulated: If ( ) is not a zero sequence , the corresponding series diverges. The converse is not generally valid (a counterexample is the harmonic series ).

If all terms of the series are nonnegative real numbers, then converges and for all

with real or complex numbers , then the series also converges

absolutely, and it is .

If all terms of the series are nonnegative real numbers, then diverges and for all

with nonnegative real numbers , then the series also diverges

If a constant and an index exists, so for all true

then the series converges absolutely.

If a constant and an index exists, so for all true

then the series converges absolutely.

Is a nonnegative, monotonically decreasing function with

then converges if and only if the integral

A number of the form

with non-negative is called an alternating series . Such a series converges when the sequence converges monotonically to 0. The reverse is not universal.

In addition to the convergence and numerical value of a row, the symbolic value of a row is also important. For example, mathematical constants can be represented and calculated numerically. Example for ( natural logarithm )

There are tabulations in series tables for important series representations .

Some important functions can be represented as Taylor series . These are certain infinite series in which powers of an independent variable occur. Such series are generally called power series . If negative powers of the variables are also permitted, one speaks of Laurent series .

The Fourier series of a function is its development according to trigonometric functions and . The Euler number is also of this type.

A development is called a Dirichlet series

In computer science, the prefix sum is an algorithm that replaces each entry in an array with the partial sum . The prefix sum can be parallelized and is therefore a basic algorithm for computer systems with several processor cores , GPUs or computer clusters .

Wikibooks: Math for Non-Freaks: Convergence of a Series  - Learning and Teaching Materials