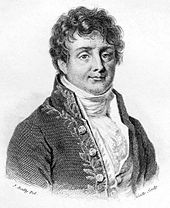 Mathematicians such as Euler , Lagrange or Bernoulli's were already familiar with Fourier series for some functions in the 18th century . At the beginning of the 19th century, Fourier claimed in his Théorie analytique de la chaleur (1822) that such series developments existed for all functions. This claim was initially rejected by leading mathematicians such as Cauchy and Abel .

The epicyclic theory can be viewed as an early geometric pre-form of approximation by a Fourier series . 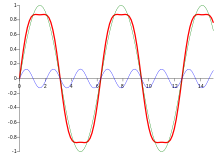 The signal drawn in bold is broken down into the two signals drawn in thin lines by Fourier analysis. The positive and negative half- oscillation look the same because a component with three times the frequency has been added.

Here, the positive and the negative half- oscillation are different because a component with twice the frequency was added.

The starting point of our considerations forms the amount of all -periodic functions by . On this set we can define an addition and a scalar multiplication point by point, i.e. H. be defined through and through (with ). With these mappings becomes a vector space.

We now define a (partial) function on the vector space :

It should be noted that on is not entirely defined because the integral does not exist for any . On the subspace of which through

is defined, but is defined everywhere. We will therefore restrict ourselves to the subspace for further considerations and therefore define the function

It should be noted that it is a positive semidefinite Hermitian sesquilinear form . The following applies:

We define as and

is therefore a positively definite Hermitian sesquilinear form. becomes a prehistoric dream. Since is complete, there is even a Hilbert space.

In the following, we will not make a strict distinction between the functions in and the remainder classes in .

Now let's look at the crowd . (This amount is well defined because the function regarding. All is-periodic.) Because obviously true, generates a subspace of . Since the vectors in are linearly independent, is a basis of . therefore has dimension .

The following applies to any two vectors :

With regard to the inner product, there is an orthonormal basis of .

Note: It is no coincidence that the functions in are orthonormal to one another! The inner product was intentionally defined to be an orthonormal basis.

We can now represent each function formally as a series:

We call this formal series the Fourier series of . Taking advantage of the sesquilinearity of and the orthonormality of follows

We can therefore calculate the values ​​of . It should be noted, however, that the series

not necessarily converged against . Therefore it is necessary to study the convergence behavior for different classes of functions.

However, it holds that if and only if and only finitely many are not equal to 0 . This follows directly from the fact that from is generated. As a consequence, the Fourier series converges for in any case.

which gives the coefficients of the Fourier series of a -periodic function , we call the Fourier transform of . The we call Fourier coefficients . The functions form a vector space with respect to pointwise addition and multiplication.

We can also use a linear mapping

define. We call the figure the inverse Fourier transform (of -periodic functions). It applies .

Fourier series can also be in the form

represent. The following then applies to the Fourier coefficients

One can get the Fourier coefficient through

also calculate directly. If is real-valued, then real-valued Fourier coefficients are obtained.

with possible. Because of

The angle results from

(Note: In the literature, the angle is often given in the form of the arctangent. Since the tangent function is only -periodic, one must make case distinctions in such a representation. However, if one calculates the angle via the arccosine or arcsine, one has the advantage that you don't have to make case distinctions because the sine and cosine functions are -periodic!)

In addition, the Fourier series of a -periodic function can be represented as analogous to the -periodic case . Here the scalar product becomes on the space

Relationship with the Fourier transform for non-periodic functions

Fourier series can only describe periodic functions and their spectrum. In order to also be able to describe non-periodic functions spectrally, a limit transition of the period is carried out. As a result, the frequency resolution becomes as fine as desired, which results in the complex amplitude spectrum disappearing. For this reason, the complex amplitude density spectrum is introduced , starting from the complex Fourier series, initially for the discrete arguments :

By forming the limit value (at the same time ) the Fourier transformation follows directly :

We have the Fourier series for the inner product

Are defined. However, one can also consider other inner products, which means that other vectors are orthogonal to one another. Since the Fourier coefficients are determined with reference to an orthonormal system, other coefficients are obtained thereby. Since many properties of the Fourier transform are based on the utilization of the orthogonality of the trigonometric functions, the properties of the Fourier transform also change when other inner products are used.

Let be a Hilbert space with an orthonormal basis . Then you can go through every element of the Hilbert space 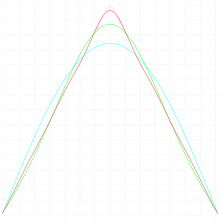 Different approximations of a triangular pulse

The triangle function can be approximated with sine and cosine terms depending on the desired phase position. With the peak value, the Fourier series are:

Different approximations of a square pulse

The square wave is defined by

The Fourier series for this is

This function shows that a square wave can be represented by an infinite number of harmonics . It contains the odd harmonics, whereby the amplitude decreases with increasing frequency . Because of this, a square-wave signal is also often used for testing electronic circuits, since the frequency behavior of this circuit is recognized in this way.

In general, all periodic oscillations with the period duration of the fundamental oscillation and any course within the period contain only odd harmonics if the following applies: 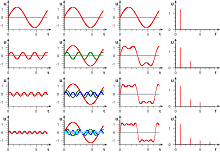 The picture on the right shows the Fourier synthesis of a square wave. The diagrams in the first column show the vibration that is added in the respective row. The diagrams in the second column show all vibrations taken into account so far, which are then added in the diagrams in the third column in order to come as close as possible to the signal to be generated. The oscillation from the first line is called the fundamental oscillation, all others that are added are harmonics. The more such multiples of the fundamental frequency are taken into account, the closer one comes to an ideal square-wave signal. Due to the Fourier synthesis, what is known as an overshoot is formed at the discontinuous points of the square-wave signal , which does not disappear even with a larger approximation. This phenomenon is called Gibbs' phenomenon , it shows a constant and bandwidth independent overshoot of about 18% of the full jump. The fourth column shows the amplitude spectrum normalized to the fundamental oscillation .

Different approximations of a sawtooth pulse

Likewise, point-symmetric functions can be approximated from sine terms. A phase shift is achieved here by alternating signs: 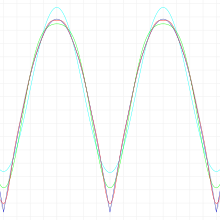 Different approximations of a sinus pulse

Convergence statements on the Fourier series

It is possible to set up a Fourier series for a periodic function without hesitation, but this series does not have to converge. If this is the case, no further information is obtained from this transformation. If the series converges, one must be clear in what sense the convergence is present. Mostly, one examines Fourier series for point-wise convergence , uniform convergence or for convergence with respect to the norm.

A Fourier series expansion of a periodic function with a period is possible in the following cases, which gradually become more general:

In the following some important theorems about the convergence of Fourier series are enumerated.

Peter Gustav Lejeune Dirichlet proved that the Fourier series of a differentiable, periodic function converges point by point to the output function. Provided that it is even continuously differentiable, the statement can be improved.

Let be a continuously differentiable, periodic function, then the Fourier series of uniformly converges to .

Carleson's theorem is a deep finding result of the convergence of a Fourier series.

Let be a square integrable function , then the Fourier series converges from almost everywhere .

This statement is true even for all spaces and is called the Carleson – Hunt theorem in this general form. Kolmogorov was able to show in 1923 by a counterexample that the statement is false. Nikolai Nikolajewitsch Lusin suspected the correctness of Carleson's theorem as early as 1915, but could not prove it. Lennart Carleson was only able to prove this in 1964.

Leopold Fejér proved that the arithmetic means of the partial sums of the Fourier series of a continuous, periodic function converge uniformly to the function.

Let be a continuous, -periodic function and the Fourier series of . The nth partial sum of this series is described with. Then Fejér's theorem says that the partial sums converge uniformly to . So it applies

where the convergence is uniform. 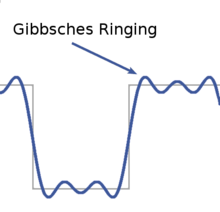 In the vicinity of jump points, typical overshoots and undershoots of around 9% of half the jump height arise in the Fourier series. This effect has far-reaching effects in signal processing.

although there is convergence in the sense of the norm, the sequence generally does not converge uniformly.