The spaces , also Lebesgue spaces , are special spaces in mathematics that consist of all p -fold integrable functions . The L in the name goes back to the French mathematician Henri Léon Lebesgue , as these spaces are defined by the Lebesgue integral . In the case of Banach space -valent functions (as shown in the following for vector spaces in general ), they are also called Bochner-Lebesgue spaces . That in the designation is a real parameter: a space is defined for each number . The convergence in these spaces is called the convergence in the p th mean .

Be a measure space , and . Then the following set is a vector space :

Figure given is for one semi-norm on . The triangle inequality for this semi-norm is called the Minkowski inequality and can be proven with the help of the Hölder inequality .

Just then, is a norm on when the empty set the only null set in is. If there is a null set , the characteristic function is not equal to the null function , but it holds .

In order to arrive at a standardized space even in the case of a semi- standard , functions are identified with one another if they are almost the same everywhere . Formally this means: One considers the ( independent) sub-vector space

and defines the space as the factor space . So two elements of are equal if and only if holds, i.e. if and are almost everywhere the same.

The vector space is normalized by. The norm definition does not depend on the representative , that is, for functions in the same equivalence class . This is due to the fact that the Lebesgue integral is invariant to changes in the integrand to zero sets.

The normalized vector space is complete and therefore a Banach space , the norm is called the L p norm .

Also you can use the essential supremum (in characters: ) a defined-space, the space of essentially bounded functions. There are various possibilities for this, but they all coincide for σ-finite measure spaces . The most common is:

If you look at it analogously to the above , you get a Banach space again.

Lebesgue spaces with respect to the Lebesgue measure

A very important example of -spaces is given by a measure space , then the Borel σ-algebra , and the Lebesgue measure . The shorter notation is used in this context .

If one considers the measure space , where the set of natural numbers , their power set and the counting measure were chosen, then the space consists of all sequences with

Completely analogously, one can consider the measurement space with the counting measure for any index set . In this case it is called the space , it applies

where the convergence of the sum may imply that only countably many summands are not equal to zero ( see also unconditional convergence ). If the set is countably infinite, then such a space is isomorphic to the sequence space defined above . In the case of an uncountable index set, one can understand the space as a locally convex direct limit of -sequence spaces.

One chooses , as the Borel σ algebra and wherein and the -dimensional Borel Lebesgue measure , then one obtains the measure space . The Lebesgue space of the square-integrable functions with regard to this measure is a real subspace of the space of the temperature-controlled distributions . Under the Fourier transformation, it is bijectively mapped onto the space of the square-integrable Sobolev functions for the differentiation order , also a real subspace of . The Fourier transformation converts the corresponding norms into one another:

For the above spaces are dense subspaces of , so that in this case one can also consider the Fourier transformation on instead of on .

According to Fischer-Riesz's theorem , the -spaces are complete for everyone , i.e. Banach spaces .

If it is a finite measure, then it holds for (follows from the inequality of the generalized mean values )

For general dimensions, always applies . This is also known as convex or Hölder interpolation .

Let be a separable measuring space , a measure on and , then is separable . The room , however, is generally not separable.

Be open . For lying test function space close in .

For the dual spaces of the spaces are again Lebesgue spaces. Specifically,

where is defined by , also is the canonical, isometric isomorphism

It follows that for the spaces are reflexive .

For is to isomorphic (the isomorphism analogous to above), if σ-finite or more generally is localizable . If not -finite, then (again under the same isomorphism) can be represented as the Banach space of the locally measurable, locally essentially restricted functions.

The spaces and are not reflexive.

The function defined by is a function with norm:

But the function is not a function, because

Other examples of functions are the Schwartz functions .

As mentioned above, the spaces are complete. So the space with the scalar product is really a Hilbert space. The space of the Schwartz functions and the space of smooth functions with compact support (a subspace of the space-Schwartz) are sealed in Therefore, one obtains the inclusions

In this case, with the corresponding topological dual space referred to, in particular is called space of distributions and space of the tempered distributions . The couples

are examples of extended Hilbert spaces .

Be a Banach space and a measure space . For one defines

where “measurable” refers to the Borel σ-algebra of the norm topology of . The image

The statements listed under properties also apply to the Bochner-Lebesgue spaces . There is only a difference in the dual spaces. This applies to everyone

In stochastics one considers spaces that are equipped with a probability measure . A random variable is then understood to be a measurable function . Next is the expected value for quasi-integrable than

Are defined. Random variables that are functions have a finite expectation. Furthermore, random variables are in if you can assign a variance to them. Since this is often required for practical applications, spaces are particularly important in stochastics.

Spaces related to the Lebesgue spaces

Often one also considers -functions for. In addition, the Sobolev spaces and the Hardy spaces are examined in functional analysis, which can be understood as special cases of -spaces, and in differential geometry there is a generalization of -spaces on manifolds . 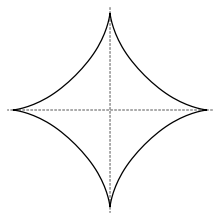 A circle with respect to (2/3) -quasinorm in two dimensions, i.e. H. in , with counting measure, is an astroid . The circular disk is not convex .

There is also the generalization of -spaces or for . However, these are no longer Banach spaces because the corresponding definition does not provide a norm. After all, these spaces are complete topological vector spaces with the quasi-norm

or the pseudo norm or Fréchet metric

or the translation-invariant metric

For the quasinorm, the triangle inequality is weakened, the positive homogeneity is retained:

For the Fréchet metric, however, the positive homogeneity is weakened, the triangle inequality remains:

These spaces are generally not locally convex , so Hahn-Banach's theorem is generally not applicable, so that there are possibly “very few” linear continuous functionals. In particular, it is not certain that the weak topology can separate into points . One such example provides with .

→ Main article : Function that can be integrated locally

is finite. The set of these functions is denoted by. Analogous to the -spaces, equivalence classes of functions that differ only on a zero set are also formed here, and the space is then obtained as a factor space. With the family of all semi-norms (for compact sets ) this becomes a Hausdorff , locally convex and complete topological vector space ; by selecting a countable number of compacts that suitably approximate, even a Fréchet space . This space can be understood as the space of the regular distributions and can therefore be continuously embedded in the space of the distributions . The spaces of the locally p-integrable functions can also be defined analogously .

In addition to the already mentioned Sobolev rooms with square-integrated functions, there are other Sobolev rooms. These are defined using the weak derivatives and include integrable functions. These spaces are used in particular for the investigation of partial differential equations .

If, instead of examining the measurable functions, only the holomorphic or harmonic functions are examined for integrability, then the corresponding spaces are called Hardy spaces.

On an abstract differentiable manifold that is not embedded in a Euclidean space, there is no canonical measure and therefore no functions can be defined. However, it is still possible to define an analogue to -space by examining so-called 1-densities instead of functions on the manifold. For more information, see the Density Bundle article .