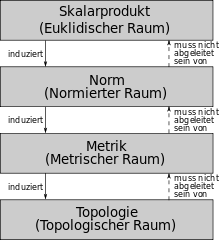 Relationships between norm, metric and topology

If a normalized vector space , the norm of the space induces a metric by forming the difference between two vectors

on . With this metric, the vector space becomes a metric space . A metric can now be used to a ε-environment to a vector by

define. A subset is then called open , if

applies. The metric now induces a topology via these open sets

The norm topology is actually a topology, as can be demonstrated by checking the three topology axioms , which are valid in the following form for all metric spaces.

1. The empty set and the basic set are open:

2. The intersection of finitely many open sets is open:

Be the sets with open. Then there are bounds and one from the intersection of these sets such that for holds. If you choose now , then the average of these sets is open.

3. The union of any number of open sets is open: