An epsilon neighborhood ( ) around the number , drawn on the number line .

Mathematical properties related to a certain environment are called local , as opposed to global . 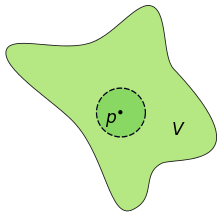 The crowd is a neighborhood of the point . 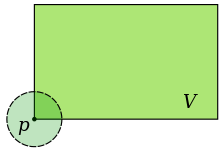 The rectangle is not an environment for the corner point .

In a metric space , the concept of the environment results from the metric : The so-called environments are defined . For every point in space and every positive real number (epsilon) is defined:

The so defined -environment of is also called an open -ball around or open ball. A subset of is now just then a neighborhood of the point when an environment of contains.

A set is called neighborhood of if and only if there is one such that the property is satisfied for all with .

With quantifiers , the situation can also be expressed as follows:

For example, take the following amount :

This set is a neighborhood of because it is a superset of for one :

The set of the surroundings of the point forms a filter with regard to the set inclusion , the ' environment filter ' of .

A subset of is called a neighborhood base of , or base of if each neighborhood of contains an element of as a subset. The open surroundings of a point always form the basis of its environmental system. Another example is the neighborhoods of a point in a metric space. Likewise in the squares with the center and positive side length.

A subset of a topological space is around the amount , if an open set with exists.

The following properties apply to the environments:

These four properties are also called Hausdorff's environmental axioms and form the first historical formalization of the concept of topological space.

Conversely, if one assigns a set system that fulfills the above conditions to each point of a set , then there is a clearly determined topology , so that for each point the system is the surrounding system of . For example, the environments defined above in metric spaces fulfill conditions 1 to 4 and thus clearly define a topology on the set : the topology induced by the metric. Different metrics can induce the same concept of environment and thus the same topology.

In this case a set is open if and only if it contains a neighborhood of this point with each of its points. (This sentence motivates the use of the word “open” for the mathematical term defined above: Each point takes its nearest neighbors with it into the open set; clearly speaking, none is “on the edge” of the set.)

A dotted environment of a point arises from an environment by removing the point , that is

Dotted environments play a role in particular when defining the limit value of a function , as well as in function theory when considering path integrals of holomorphic functions.

In a metric space , a dotted neighborhood looks like this :