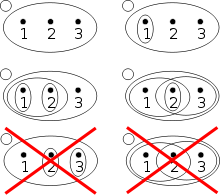 Examples and counterexamples for topologies - the six figures represent subsets of the power set of {1,2,3} (the small circle at the top left is the empty set). The first four are topologies; in the example at the bottom left {2,3} is missing, at the bottom right {2} for the topology property.

A topological space is the fundamental subject of the sub-discipline topology of mathematics . By introducing a topological structure on a set, intuitive positional relationships such as “proximity” and “striving against” can be transferred from the visual space to a large number of very general structures and given a precise meaning.

A topology is a system of sets consisting of subsets of a basic set , called open or open sets , which satisfy the following axioms :

Then called a topology on , and the couple a topological space .

Speaking: elements are points, the set is a space

A subset of topological space whose complement is an open set is called closed . If one dualises the definition formulated above and replaces the word “open” with “closed” (as well as interchanging intersection and union), the result is an equivalent definition of the term “topological space” using its system of closed sets.

In a topological space, each point has a filter of surroundings . This allows the intuitive concept of “proximity” to be understood mathematically. This term can also be used as a basis for a definition of topological space.

Comparison of topologies: coarser and finer

This way of speaking is compatible with the "finer" order of the surrounding systems as a filter: If there is a fixed point in space, then the environment filter generated by the finer topology is finer than the one generated by the coarser topology .

As with every mathematical structure, there are also structure-preserving images ( morphisms ) in the topological spaces . Here are the continuous maps : A picture is (global) steadily when the archetype of every open subset of an open set in is formal: .

Topological spaces in relation to other structures defining proximity