In mathematics, objects that are similar in a certain context are regarded as equivalent or equivalent .

Such a connection can always be established for all elements of a non-empty set through a function by designating two elements as "equivalent" to one another and symbolizing this relationship by if their images are the same:

This relationship or relation has the following three properties:

An equivalence relation on a set is a two-digit relation that fulfills the following conditions:

As usual with two-digit relations, if you write instead of simpler , then these properties take the form mentioned above. 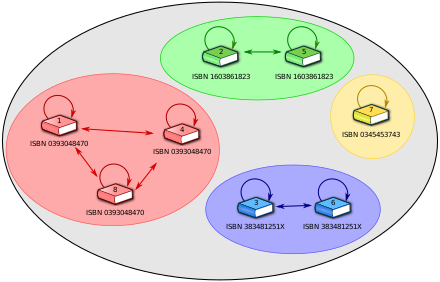 If an equivalence relation is on a set ( class ) , then the subset (or subclass) is called

of all elements to be equivalent, the -equivalence class of .

If it is clear from the context that equivalence classes are formed with respect to, the addition is omitted:

Set of quotients and partition

It forms a decomposition or partition of

Conversely , if there is a partition of , then through

given an equivalence relation.

which assigns its equivalence class to each element is called canonical mapping or quotient mapping .

This mapping is only injective if the equivalence relation to is the identity relation .

Core of a function

In particular, the equivalence class of each is the archetype of its image :

then be in a surjective, as follows, bijective and a one function disassemble :

with and the inclusion image .

Independence of the three properties

In fact, the properties of reflexivity, symmetry and transitivity are completely independent of each other and must all be checked individually. For example, a reflexive and symmetrical relation is not automatically transitive. In order to prove this, it is sufficient to give an example for each of the eight possible cases of what happens in the following with relations on the set of natural numbers.

None of the three properties is met

Neither reflexive nor symmetric nor transitive:

Exactly one of the three properties is fulfilled

Reflexive, but neither symmetric nor transitive:

Symmetrical, but neither reflexive nor transitive:

Transitive, but neither reflexive nor symmetrical:

Exactly two of the three properties are met

Symmetrical and transitive ( partial equivalence relation ), but not reflexive:

Reflexive and transitive ( quasi-order ), but not symmetrical:

Reflexive and symmetrical ( tolerance relation), but not transitive:

( and are equal or adjacent).

All three properties are met

Farm animals on a farm

A clear example from agriculture is intended to clarify the terms introduced. A lot of livestock on a farm is considered. We define the following binary relation to :

For every two farm animals and from should apply if and are animals of the same species .

This always applies to the cow and the ox . For the chicken , however this does not apply: . The relation fulfills the three requirements for equivalence relations:

Reflexivity
Every animal is of the same species as itself (in the sense of: every animal belongs to a species).

On any set, let two elements be equivalent if they are equal. This by the graph of the identity mapping on calls given equivalence relation to the equality or identity relation

Let any two elements on a set be equivalent. Also be an equivalence relation to given, called the all- or Universal relation

Similarity and congruence of geometric figures

Two geometrical figures and in the Euclidean plane are exactly similar to one another if they can be converted into one another by means of a similarity mapping. Due to the similarity there is an equivalence relation

and are similar to each other

given on the set of all figures of the plane.

In addition, and are congruent precisely when they can be converted into one another by means of a congruence mapping , that is to say a length-true similarity mapping . Also through

is an equivalence relation given.

Partition of a finite set of numbers

We first define six sets of natural numbers from 1 to 23:

They have the property that every number from the range from 1 to 23 occurs in exactly one of the six sets, which thus form a decomposition or partition of the set . Like every partition of , they are the equivalence classes of an equivalence relation on , viz

The sets were determined by rolling the dice, that is, they were arbitrarily selected from the approximately 44 quadrillion partitions - and thus just as many equivalence relations - of this 23-element set. Equivalent numbers according to this relation have no easily describable similarities.

Let it be the set of pairs of integers whose second entry is different from zero. The following equivalence should apply to two pairs :

Two real numbers and are called commensurable if they are integral multiples of a suitable third real number . Commensurability is an equivalence relation if one considers the zero separately:

with as the multiplicative group of .

Let be a sigma algebra on a set and a complete measure . It can easily be shown that for measurable functions the figure

The reason is that in general no strict positive definiteness true, is that a well can be considered without the zero function is - namely if and only if (that is, if.. Only on a set equal to 0, which one - zero amount represents ).

The solution is to introduce an equivalence relation: You define that and give the set of equivalence classes the name .

Then, in addition to the properties mentioned above, it is also positive definite, i.e. a scalar product and thus a norm . It is therefore a normalized space. Finally, it follows from Riesz-Fischer's theorem that this space is complete , so that it is a Banach space and in particular (since the norm is induced by a scalar product ) a Hilbert space . This finds its application z. B. in quantum mechanics , but also in probability .

It should be noted here that an element from is not a function, but an equivalence class of functions with regard to the above equivalence relation. However, since the representatives of this class only differ on a -zero set, this is irrelevant for practical purposes.

be a metric space and

Let be any relation on the set . As equivalence envelope from one calls the smallest equivalence relation that contains as part relation in sign:

is equivalence relation on with

The following applies: The equivalent envelope is the reflexive-transitive envelope of the symmetrical envelope , formally:

The symmetrical envelope denotes the converse (inverse) relation and powers of relations are formed by means of concatenation .

Any two sets and are equal if and only if there is a bijection . By laying down

an equivalence is given on the class of all sets.

In particular, all functions belonging to the structure are then also compatible.

A two-digit relation on a set is called a bounded or partial equivalence relation if it is symmetric and transitive.

Every partial equivalence relation on a set is on the subset

The result is a total decomposition of .

A two-digit relation on a set is called a pre -order or quasi-order if it is reflexive and transitive.

A relation on is a quasi-order if and only if the following applies to all :

So two elements are equivalent if they are mutually comparable.

A two-digit reflexive and symmetrical relation is called a compatibility or tolerance relation (in the finite case also a dependency relation ). Since a tolerance relation does not have to be transitive, tolerance is a weaker requirement than equivalence. It plays a role in biomathematics and model theory , and in fuzzy logic it is further generalized.

A maximum pre-class , i.e. if everyone with at least one is not tolerant, is in turn called a compatibility or tolerance class .

The set of tolerance classes of a tolerance relation on the set is an overlap of .

Wikiversity: Equivalence relations as part of a lecture on linear algebra  course materials