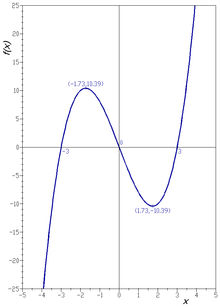 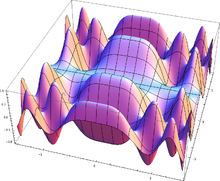 As a function graph or short Graph (rare: function Count or Count ) of a function is called in mathematics the set of all ordered pairs of the elements of the definition set and the corresponding function values .

Sometimes these pairs can be interpreted as points in the plane of the drawing or in the visual space, they are also called curve , curve progression or also function graph .

The graph of a function with is a subset of and can thus be understood as a point set or a geometric figure in the plane . Examples are:

The graphs of functions or are subsets of and can also be represented graphically as spatial figures. Examples are:

In set- theoretical definitions of functions, these are often defined as a set of digit-value pairs, that is, the graph would be nothing other than the function itself, that is . Jean Dieudonné pointed out this curiosity as early as 1960 :

It is customary, in the language, to talk of a mapping and a functional graph as if they were two kinds of objects in one-to-one correspondence, and to speak therefore of "the graph of a mapping", but this is a mere psychological distinction (corresponding to whether one looks on F either “geometrically” or “analytically”).

In the case of mathematical considerations that are not directly in the context of the set-theoretical foundation of the mathematical terms, one does not usually assume a set structure of a function, but only demands the definition of the image at a given point. Set operations are then not carried out on functions (for example, this would usually not be regarded as a meaningful expression), but in some cases it is practical to consider a function as a set with the operations and properties defined on sets; this consideration is done via the graph of the function. In addition to the possibility of viewing a function as a geometric figure, further examples are given here:

Graph in the sense of graphic representation

The graph is not a mathematical object . It serves as an illustration in the context of mathematics and allows speculations about the properties of a function.