In mathematics , a curve (from the Latin curvus “bent, curved”) is a one-dimensional object . In contrast to a straight line , for example , a curve does not have to be straight, but can instead take any shape.

One-dimensional means informally that you can only move in one direction (or the opposite direction) on the curve. Whether the curve lies in the two-dimensional plane ("plane curve") or in a higher-dimensional space (see space curve ) is irrelevant in this conceptual context.

Depending on the sub-area of ​​mathematics, there are different specifications for this description.

A curve can be defined as the image of a path . A path is (in contrast to colloquial language) a continuous mapping from an interval into the considered space, e.g. B. in the Euclidean plane . 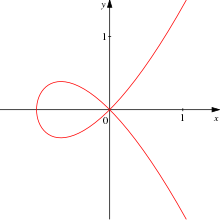 describes the unit circle in the plane.

describes a curve with a single colon at , corresponding to the parameter values and .

Occasionally, especially with historical names, no distinction is made between path and curve. So the interesting structure in the Hilbert curve is the way; the image of this path is the unit square, so it no longer has any fractal structure.

The parameter representation gives the curve a sense of direction in the direction of the growing parameter.

A curve can also be described by one or more equations in the coordinates. Examples of this are again the pictures of the two curves given by the parameter representations above:

describes the unit circle in the plane.

describes the curve specified above in the parametric representation with a colon.

If the equation is given by a polynomial , as here , the curve is called algebraic .

Function graphs are a special case of both of the above forms: The graph of a function

can either be a parametric representation

or as an equation

Is in school mathematics of Kurvendiskussion spoken, one usually thinks only this special case.

Let be an interval and a regular curve , i.e. H. for everyone . The length of the curve is

is a diffeomorphism , and the concatenation of with the inverse diffeomorphism yields a new curve with for all . One says: is parameterized according to the arc length.

Let be an interval and a curve parameterized according to the arc length. The curvature of at the point is defined as . For plane curves, the curvature can also be given a sign : If the rotation is 90 °, then it is determined by . Positive curvature corresponds to left turns, negative right turns.

Be a flat curve. It is closed when , and simply closed if, in addition to is injective. The Jordanian curve theorem states that a simply closed curve divides the plane into a bounded and an unbounded part. If a closed curve is common to all , the curve can be assigned a number of revolutions which indicates how often the curve runs around the zero point.

Smooth closed curves can be assigned to another number, the tangent revolution number , which for a parameterized by arc Läge curve by

given is. The circulation rate of Heinz Hopf says that a simple closed curve tangent winding number or has.

Generally be a topological space . Instead of closed paths with , one also speaks of loops with a base point . Because the quotient space is homeomorphic to the unit circle , one identifies loops with continuous maps . Two loops with a base point are called homotopic if they can be continuously deformed into one another while maintaining the base point, i.e. H. if there is a continuous mapping with , for all and for all . The equivalence classes homotopic loops form a group , the fundamental group of . If , then the fundamental group is isomorphic to over the number of turns .

Let be an interval and a curve parameterized according to the arc length. The following names are standard:

The main theorem of local curve theory says that a curve can be reconstructed from curvature and winding: If smooth functions are with for all (the value 0 is therefore not allowed for), there is exactly one corresponding curve except for movements .

The three vectors of two , or spanned planes through the curve point wear special name:

Curves without a surrounding space are relatively uninteresting in differential geometry , because every one-dimensional manifold is diffeomorphic to a real straight line or to the unit circle . Properties such as the curvature of a curve cannot be determined intrinsically either.

In algebraic geometry and, related to it, in complex analysis , “curves” are generally understood to be one-dimensional complex manifolds , often referred to as Riemann surfaces . These curves are independent study objects, the most prominent example being the elliptical curves . See curve (algebraic geometry)

The first book of the elements of Euclid began with the definition “A point is that which has no parts. A curve is a length without a width. "

This definition can no longer be maintained today, because there are, for example, Peano curves , i.e. H. continuous surjective mappings that fill the entire level. On the other hand, it follows from Sard's lemma that every differentiable curve has an area of ​​zero, that is, in fact, as required by Euclid, has “no width”.