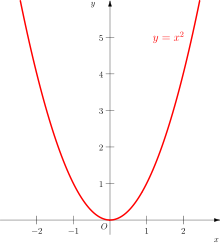 The normal parabola , the graph of the square function

A quadratic function (also a completely rational function of the second degree ) is a function that has a polynomial of degree 2 as a function term , i.e. of the form

is. The graph is the parabola with the equation . For is a linear function .

The function with the assignment rule is called the square function . Your graph is a parabola that opens upwards and is symmetrical to the y-axis, the vertex of which lies at the origin of the coordinates , the normal parabola .

A function of the form with is called a special quadratic function . Your graph is a parabola symmetrical to the axis with a vertex at the origin. This arises from the normal parabola by stretching or compressing in the direction of the -axis and, if necessary, mirroring about the -axis:

: The parabola is open upwards.

: The parabola is open downwards.

: The graph is stretched in the direction of the -axis, i.e. H. elongated, making it appear narrower and steeper.

For : the graph is simply mirrored on the -axis compared to the normal parabola .

The assignment rule for the general quadratic function is . The coefficients , and determine the range of values ​​and the shape of the graph.

How the value of changes the shape of the graph is best seen by putting and . A normal parabola is then obtained that is stretched or compressed and, if necessary, mirrored about the axis .

: The graph is open at the top.

: The graph is open downwards.

: The graph is stretched in the direction of the -axis, i.e. H. elongated, making it appear narrower and steeper.

For : the graph is simply mirrored on the -axis compared to the normal parabola .

The parameter indicates the slope of the parabola at the point of intersection with the axis. In particular, you can see from the sign of whether the -axis is intersected with the falling or the rising branch of the parabola. From this, in turn, conclusions can be drawn about the number and possible position of zeros.

The vertex then has the coordinates . The graph is axisymmetric to a line parallel to the -axis through .

There are several methods of determining the vertex or the vertex shape:

Determination of the vertex shape with a square extension

The vertex shape can be determined from the representation by adding a square .

Example: Determining the vertex shape of the quadratic function .

Determine the vertex using the derivative

The differential calculus offers another possibility to calculate the vertex . Since the vertex is always a (local) extreme point (maximum or minimum), the zero of the first derivative of the function supplies the value of the vertex:

Example: Determining the vertex of the quadratic function .

So the vertex has the coordinates .

If the zeros of the quadratic function are known, the coordinates of the vertex can be calculated as follows:

Intersection with the y-axis

Because of this , the intersection of the graph with the axis has the coordinates .

The zeros of a quadratic function are obtained by solving the equation , i.e. the quadratic equation

These can be calculated using the abc formula:

If the expression under the root ( discriminant ) assumes a negative value, this means that no (real) zeros exist.

If and are the zeros of the quadratic function , the function equation can also be written as the product of its linear factors:

Intersection of parabola and straight line

The parabola and the straight line intersect at two points ( secant ).

The parabola and the straight line touch at a point ( tangent ).

The parabola and the straight line have no intersection ( passer-by ).

The parabolas intersect in two points.

The parabolas touch at one point.

The parabolas have no intersection.

is a linear equation The parabolas have an intersection.

Be any ring . Expressions of the form are called quadratic polynomials over

with and . Formally, these are elements of the polynomial ring of degree 2, they define mappings from to . In the case it is a question of quadratic functions in the above sense.

If is an algebraically closed field , every quadratic polynomial decays as the product of two linear factors.

More generally, quadratic polynomials in variables are expressions of the form

whereby not all should be zero. These polynomials define mappings from to . Their sets of zeros in are called quadrics , in this case also as conic sections .