A quadratic equation is an equation that is in the form

with lets write. Here are coefficients ; is the unknown . If there is also , one speaks of a purely square equation .

Your solutions can be found using the formula

The left side of this equation is the term of a quadratic function (in more general terms: a polynomial of the second degree ) ,; the function graph of this function in the Cartesian coordinate system is a parabola . Geometrically, the quadratic equation describes the zeros of this parabola.

The general form of the quadratic equation is

In this context , the term quadratic term , linear term and constant term (or absolute term ) of the equation.

The equation is in normal form if , that is, if the quadratic term has the coefficient 1. From the general form, the normal form can be obtained by equivalence transformations by dividing by. With the definition

the normal form can thus be written as

In the following, quadratic equations with real numbers as coefficients , and or as and are considered first.

Solutions of the quadratic equation with real coefficients

The number of solutions can be determined with the help of the so-called discriminant (from Latin “discriminare” = “differentiate”). In the general case , in the normalized case (for derivation see below):

Position of the parabolas and effects on the number of zeros

The graphic shows the relationship between the number of real zeros and the discriminant:

If the coefficient is the linear term or the absolute term , the quadratic equation can be solved by simple equivalence transformations without the need for a general formula.

The all-square equation with is equivalent to

In the real case there are no real solutions for. The complex solutions are then

From the equation , by factoring out , i. i.e., it must or apply. So the two solutions are

For example, the equation has the solutions and .

is a variation of the all-square equation . Like this, it can be solved by "backward computing": First you subtract and divide by . this leads to

The solutions are obtained by adding

The two complex solutions are obtained for

Solve with a square extension

In solving with quadratic completion , the binomial formulas are used to convert a quadratic equation in general form or in normal form to the vertex form, which can then be easily solved.

This is best explained using a specific numerical example. The quadratic equation is considered

First, the equation is normalized by dividing by the leading coefficient (here 3):

The constant term (here 6) is subtracted on both sides:

Now the actual square addition follows: The left side must be completed so that a binomial formula (here the second) can be applied backwards. That from the above binomial formula is then , so both sides of the equation must be added:

The left side is reshaped according to the binomial formula, the right side simplified:

so to the two solutions and .

One can also solve quadratic equations by using one of the general solution formulas derived with the help of quadratic completion.

The solutions to the general quadratic equation are:

In parts of Germany and Switzerland, the formula is colloquially referred to as the "midnight formula" because students should be able to recite it even if you wake them up at midnight and ask for the formula . In Austria, the expression large formula is used .

By expanding with the term , a form of the midnight formula is obtained, which can also be used for the linear case , but which can no longer provide the calculation of the solution because of division by zero. In both cases, the solution formula is not required anyway. However, for very small amounts , the alternative form is more robust to numerical cancellation.

If you put the equation in the form

indicates (i.e. with ), one obtains the somewhat simpler solution formula

If the discriminant introduced above is negative, the root of a negative number has to be calculated for the solutions. There are no solutions for this in the number range of real numbers. In the area of ​​complex numbers, the following applies . This term determines the imaginary part of the two conjugate solutions, one with a positive, one with a negative sign. The term before with becomes the constant real part of the two solutions:

Derivation of the abc formula

The general shape results from reshaping according to the method of square completion :

If the normal form is present, the solutions are according to the pq formula

In Austria this formula is known as a small solution formula .

As with the abc formula , when is negative, there are no solutions in the real number range. The complex solutions then result in:

Derivation of the pq formula

The formula results from the normal form of the quadratic equation by adding the square :

Another possibility to derive the formula, is that one in the abc- formula , and sets the denominator and 2 draws in the root.

With the solutions, the quadratic normalized polynomial can be broken down into linear factors:

and the non-standardized in

If the quadratic equation is in normal form and has the solutions and , then applies

By comparing the coefficients , one obtains Vieta's theorem

In particular, if and are whole numbers , the solutions can often be found quickly with a little practice by trying out whether the divisor pairs of result as a sum . For example, one gets for the solutions and through the decomposition with .

If the solutions are determined numerically and differ by orders of magnitude, the problem of cancellation can be avoided by varying the above formulas as follows:

result as solutions according to the abc formula

To use the pq formula, the general form is first converted into the normal form by dividing the equation by 4:

The solutions result from the pq formula

With the help of the decompositions and one obtains the same solutions with Vieta's theorem.

with complex coefficients , always has two complex solutions that coincide if and only if the discriminant is zero.

As in the real case, the solutions can be calculated by adding the square or using the solution formulas given above. In general, however, a square root of a complex number must be calculated.

For the quadratic equation

the discriminant has the value . The two solutions and result .

In general, in abstract algebra, one calls an equation of form

with elements p , q of a body or ring a quadratic equation . In solids and, more generally, in areas of integrity , it has at most two solutions, in arbitrary rings it can have more than two solutions.

If solutions exist, then one obtains them in commutative rings also with the pq- formula, if the characteristic of the ring is not equal to 2. Here, however, all possible square roots of the discriminant must be taken into account. For a finite field of characteristic 2 making the approach and passes by means of a system of linear equations for n coefficients a i from .

As early as 4000 years ago in the Old Babylonian Empire , quadratic equations were solved, for example in the following way: The quadratic equation is equivalent to the system of equations and . The approach or is now made for x . For the product results

With this, the solution of the quadratic equation is also determined. The equation is discussed as an example . This is equivalent to the system of equations and . The above approach delivers

For the solution of the quadratic equation results

The Greeks did not know negative numbers and had to make several case distinctions for the quadratic equation. Equations of the kind

are solved geometrically in Euclid ( II 11 ); the forms 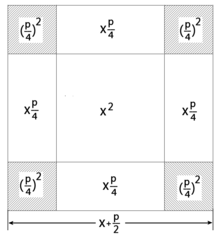 geometric solution of the Brahmagupta equation . The area not hatched corresponds to .

described in words. As you can see from the picture (left), the following division of the square applies:

This immediately provides the solution in today's notation as

Al-Chwarizmi was the first to put six different types of in the book of al-Kitāb al-muḫtaṣar fī ḥisāb al-ğabr wa-ʾl-muqābala ("The concise book on the calculation methods by supplementing and balancing") around 825 AD quadratic equations. The need for different types arises from ignorance of negative numbers and zero. Using a numerical example, he gave a geometric solution method for all types, which meant that only positive solutions were possible.

He presented the six types as text. The root means the solution sought and the capacity the square of the solution :

A, b and c stand for nonnegative coefficients and x for the solution sought. 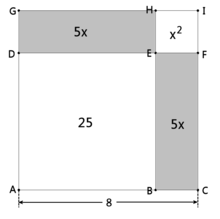 As an example, the equation as it occurs in al-Khwarizmi ,

described verbally; in today's notation as

However, Heron adds the Euclidean way as a geometric justification.

Around 1145 Robert von Chester and a little later Gerhard von Cremona translated the writings of al-Chwarizmi into Latin.

This brought the classification and the geometric solution methods to Europe.

Michael Stiefel wrote the book "Arithmetica integra" in 1544 AD, which is based on Christoph Rudolff's book "Behend vnnd Hubsch calculation through the artful rules of algebre so commonly called Coss" . By using negative numbers, the author succeeds in avoiding the case distinction for quadratic equations. But he does not yet allow negative numbers as solutions because he finds them absurd.

A new approach to solving a quadratic equation was offered by Vieta's theorem of roots , which was published posthumously in 1615 in his work De Aequationem Recognitione et Emendatione Tractatus duo .

In 1637, René Descartes described a method for solving quadratic equations with compasses and ruler in his work La Géométrie . He further showed that equations of a higher degree, in general, cannot be solved solely with a compass and ruler.