This article is primarily concerned with the sum as the result of an addition.

The Greek capital sigma is often used to add up sequences of numbers. It is then called the "sum symbol".

In mathematics, a sum describes the result of an addition as well as the representation of the addition. In the simplest case, a sum is a number that is created by adding two or more numbers. There are many generalizations to this term. In the past, for example, one spoke of summable functions and meant integrable functions .

The word sum was borrowed in Middle High German from the Latin summa . Summa was used next to sum up to the 19th century and goes back to summus , one of the Latin superlatives of superus "above, the / the / the higher / upper", which consequently means "the / the / the highest / supreme" mean. "The top one" because the Romans used to write the total in the top line, ie above the summands, and not, as is common today, "the bottom line".

In everyday language, sum denotes an amount of money , regardless of whether it has come about through addition or not.

Sum as a result and representation of an addition

In the mathematical term

You can form a sum with more than two summands, for example . A common convention is to simply leave out the brackets when using left parentheses, i.e. simply abbreviate them with . Due to the associativity of the addition of natural numbers, the order in which the additions are carried out does not matter for the result. The following applies:

Due to the commutative law of addition of natural numbers, the order of the summands is also irrelevant, for example:

If the same number is added twice, the sum can also be written as a product . For example:

In some cases, the individual summands are not simply added, but rather multiplied by a weight beforehand:

Sum of a sequence, series

If a sum has a large number of summands, it is advisable to agree on an abbreviated form. For example, the sum of the first 100 natural numbers can be used as

because it is easy to guess which summands have been replaced by the ellipsis .

Just as in elementary arithmetic one moves from numerical calculations to letter calculations such as , one can e.g. B. also generalize the sum of a hundred very specific numbers to the sum of any number of arbitrary numbers. To do this, a variable is first selected, for example , which describes the number of summands. In the above case, the sum of the first hundred natural numbers would be . Since arbitrarily large numbers should be allowed, it is not possible to designate all summands with different letters. Instead, a single letter, e.g. B. , selected and supplemented by an index . This index takes on the values ​​one after the other . The summands are called accordingly . They form thus figures follow .

write. If you use different values , they in turn also form a sequence. Such a sequence of partial sums over the initial terms of a sequence is called a series .

Example: For the sequence of square numbers , , . In general:

The series of partial sums this episode begins with , , . A summation formula says for any :

Other summation formulas such as The Little Gauss

can be found in the arithmetic formula collection . The proof of such formulas can often be done by means of complete induction .

Notation with the sum symbol 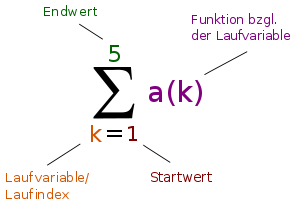 Sums over finite or infinite sequences can also be noted with the sum symbol instead of with an ellipsis :

The sum symbol consists of the capital Greek letter Σ ( sigma ), followed by a sequence term, which is indicated by an index (here ) that was not previously used . This index is often referred to as a running index or summation variable or running or counting variable . One of the letters is often used for this. If it is not clear which variable is the counter variable, this must be noted in the text.

The values ​​that the run variable can assume are displayed on the bottom and, if necessary, on the top of the symbol Σ. There are two ways to do this:

This information can be reduced or omitted if it can be assumed that the reader will be able to add it out of the context. This is used extensively in certain contexts: In tensor calculus , Einstein's summation convention is often agreed , according to which even the summation sign can be omitted, as it is clear from the context that all duplicate indices have to be summed up. Here is an animation of the Sigma notation:

Let be an (index) set, a commutative monoid . For each one is given. Then the following can be defined at least for finite index sets by recursion: One sets

by choosing any element . Commutativity and associativity of addition in guarantee that this is well defined.

In this sense, the notation with is just an abbreviation for with .

If is infinite, it is generally only defined if holds for almost all . In this case you bet

According to the assumption, on the right is a finite index set, i.e. a sum as defined above. If an infinite number are not equal to 0, then despite the same spelling, it is no longer a sum, but a series ( see below ).

If the following link is reported as a sum (or difference), it must be written in brackets:

If the following term is communicated as a product (or quotient), the brackets are superfluous:

For the sum consists of a single summand :

For one has a so-called empty sum , which is equal to 0, since the index set is empty:

If the general sequel is constant (more precisely: independent of the running variable ), the sum can be rewritten as a simple product:

You can also add totals again. This is particularly useful if the first, the "inner" sum, contains an index that can be used as a running index for the "outer" sum. For example you write:

An apostrophe at the summation sign means that summands are to be omitted from the summation for which the two running variables match:

When an infinite number of expressions are summed up, for example

with (countable) infinite number of non- zero summands , methods of analysis must be applied to the corresponding limit value

to be found, if it exists. Such a sum is called an infinite series . The symbol for infinity is written as the upper limit .

Important differences between series and real sums are, for example:

It should be noted, however, that not every sum that has an upper limit has to be an infinite sum. For example has the sum

for prime numbers and with the integer function, there is an infinite number of summands, but only finitely many are not equal to zero. (This sum indicates how often the factor occurs in the prime factorization of .)