The faculty (sometimes, especially in Austria, also called factorial ) is a function in mathematics that assigns the product of all natural numbers (without zero) less than and equal to this number to a natural number . It is abbreviated by an exclamation mark ("!") After the argument . This notation was first used in 1808 by the Alsatian mathematician Christian Kramp (1760-1826), who also introduced the term faculté "ability" for it around 1798 .

For all natural numbers is

defined as the product of the natural numbers from 1 to . Since the empty product is always 1, the following applies

The faculty can also be defined recursively :

Faculties for negative or non-integer numbers are not defined. But there is an extension of the factorial to such arguments (see section Gamma function ).

In counting combinatorics , faculties play an important role because the number of possibilities is to arrange distinguishable objects in a row. If there is an -element set, so is the number of bijective mappings (the number of permutations ). This also applies in particular to the case where there is exactly one possibility to map the empty set onto itself.

For example, in a car race with six drivers, there are different options for the sequence when crossing the finish line when all the drivers have reached the finish. All six drivers are eligible for first place. Once the first driver has arrived, only five drivers can compete for second place. For the occupancy of the second place, it is decisive which of the six drivers does not have to be taken into account (since he is already placed in first place). For this reason, it must be counted separately for each possible occupancy of place 1 how many occupancy possibilities exist for place 2. There are therefore options for occupying places 1 and 2 with six drivers . If the second place is also taken, only four drivers are considered for the third place, which results in occupancy options for the first three places and six drivers , etc. So in the end there are

different ranking lists for the finish.

It indicates the number of possibilities to select a -element subset from a -element set. The reverse is true

Here is the most popular example, using the 6 out of 49 number lottery

A prominent place where faculties occur are the Taylor series of many functions such as the sine function and the exponential function .

The Euler number can be of as the sum of reciprocals define the faculties:

The faculty and the Stirling formula

The numerical value for can be calculated recursively or iteratively , provided it is not too large.

Approximation with the Stirling formula

When is large, you can get a good approximation for using the Stirling formula :

It means that the quotient of the left and right side converges for against .

There are a number of other sequences and functions that look similar to the faculty in their definition or properties: 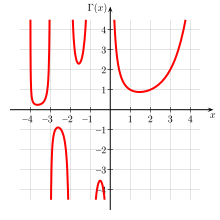 The gamma function generalizes the faculty around its domain of definition from natural to complex numbers :

The rising and falling factorials and represent a combinatorial generalization because .

The prime faculty of a number is the product of the prime numbers less than or equal to the number:

The sub-faculty that occurs primarily in combinatorial studies

denotes the number of all fixed point-free permutations of elements.

It is defined as:

Often, instead of the double faculty, expressions with the ordinary faculty are used. It applies

If non-integer function values ​​are allowed, then there is exactly one extension to negative odd numbers, so that applies to all odd whole numbers . The formula for odd is obtained .

The values ​​of the double faculties form the sequence A006882 in OEIS .

Analogous to the double factorial, a triple ( ), quadruple ( ),…, -fold factorial ( ) is recursively defined as

The term super faculty is used for (at least) two different functions; one is defined as the product of the first faculties:

, the other as a multiple power of a factorial

The hyperfaculty for natural is defined as follows:

It can be generalized to complex numbers using the K function .

If you are not looking for the full number , but only the exponent of one of its prime factors, this can be determined directly and efficiently.

Here stands for the exponent of in the prime factorization of .