Permutations have a wide range of uses within and outside of mathematics , for example in linear algebra ( Leibniz formula ), analysis ( rearrangement of rows ), graph theory and game theory , cryptography ( encryption method ) , computer science ( sorting method ) and quantum mechanics ( Pauli Principle ).

Permutations of four colored balls without repetition (left) and with repetition (middle and right).

For example, there are possible arrangements of four different colored balls in a row.

given. If there is not just one, but groups with identical objects, then all of these objects can be exchanged in their places without creating new arrangements. If one also counts the objects that only occur once with a multiplicity , then the following applies and the number of possible permutations is given by the multinomial coefficient

Let be a set with elements , then a -digit permutation (without repetition) is a bijective map

Since, by definition, every finite set is equal to a set of the form {1, 2, ..., n} , one can always restrict oneself to the first natural numbers as a reference set when considering permutations mathematically . A permutation is then a bijective mapping

which assigns every natural number between and exactly one number in the same range. If you imagine all the numbers in a list, then the number takes the place with the number through the permutation .

In the detailed representation of a -digit permutation , this is written as a matrix with two rows and columns. In the top line are the numbers from to (in any order). The function value is then located under each number in the second line :

The second line also contains every number from to exactly once.

The permutation with and is in the two-line form by

With the more compact tuple notation, you just write the function values in one line:

This notation therefore only uses the second line of the two-line form. Since the information about the number that is mapped to is lost, the tuple notation can only be used if the order of the numbers from the first line is known. Usually this is the natural order. The tuple notation can easily be confused with the cycle notation (see following section), especially since some authors leave out the commas.

The tuple notation is used for the above example permutation

The cycle notation also only requires one line. You start with any number and write

where the -fold execution of denotes and the smallest natural number is with . Such a bracket is called a cycle and is its length. If there are other numbers that have not yet been noted, choose such a number and write another cycle of length after it. You go on until you write down each number exactly once. Brackets containing only one number can then be deleted again. This representation is not clear, because the order of the cycles can be selected as desired and the numbers can be interchanged cyclically in each cycle.

The following cycle notation is used for the above example permutation:

Graph of the permutation

Permutations as a group

The Galois group in (classical) Galois theory is such a subgroup of the symmetrical group: The zeros of polynomials are permuted . The properties of the Galois group provide information about the solvability of a polynomial equation by radicals, i.e. H. by root expressions. This can be used to prove, for example, that the general polynomial equation of the fifth or higher degree cannot be solved by radicals ( Abel-Ruffini theorem ).

applying first and then . This sequential execution is also called composition , linkage or product of two permutations and the result is again a -digit permutation. The composition of permutations is not commutative , that is, in general, and give different results. The symmetric group is therefore not Abelian . However, the composition is associative, i.e. it applies to all permutations

It is for example

To get the result, you apply the permutations from right to left and follow the path of the individual numbers. This is mapped to itself in the second permutation and then to the , that is , as a whole in the first permutation . The way is corresponding , so . The finally goes the way , in the result .

The cycle display is analogous, whereby numbers that do not appear in a cycle are recorded. For example is

Here we determined the paths , , and .

The neutral element of the symmetric group is the identical permutation

that is, the permutation that leaves all numbers in their place. So for every permutation

The inverse permutation is obtained by exchanging the upper and lower lines in the two-line form:

The inverse permutation to

The symmetrical group has the three conjugation classes:

Denoted for the number of cycles of the length in a permutation , then the cycle type of this permutation is the formal expression

The order of a permutation is the smallest natural number in such a way that executing one after the other results in the identical permutation:

A pair of numbers is called an error or inversion of a permutation , if and applies. So two numbers form an error if and only if the larger one comes before the smaller one after applying the permutation. The set of deficiencies in a permutation is thus through

A permutation thus has the sign if its missing number is even, otherwise the sign . In the first case one speaks of an even and in the second case of an odd permutation. The set of even permutations forms a subgroup of the symmetrical group , the alternating group .

given. The same applies to a descent . The number of permutations in with exact increases or decreases is given by the Euler numbers . A maximum, that is to say no longer extendable on both sides 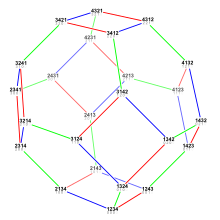 Hasse diagram of the permutations in S 4 . Blue, green and red edges correspond to the neighboring swaps (1 2), (2 3) and (3 4), which, viewed from bottom to top, always produce exactly one missing position.

define, where are. The minimum element with respect to this order is the identical permutation, while the maximum element is the permutation which reverses the order of all numbers. In the associated Hasse diagram , two permutations are connected by an edge if they emerge from one another through a neighboring exchange. The nodes and edges of the Hasse diagram form a Cayley graph that is isomorphic to the edge graph of the corresponding permutahedron . The permutahedron is a convex polytope in -dimensional space, which arises from the fact that the permutations of the set are interpreted as coordinate vectors and then the convex hull of these points is formed.

to assign. Instead of the inversion vector, the Lehmer code is also used to number permutations.

Graph of a cyclic permutation of length 6

An example of a self-inverse permutation is mirroring 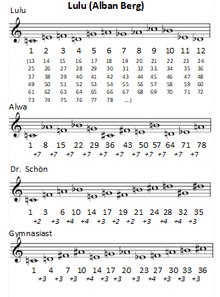 About permutation in the fugue composition see under Fugue .

In twelve-tone technique , permutation is the derivation of further rows from a twelve-tone row by taking individual tones out one after the other according to a specific numerical selection mode until a new, complete twelve-tone row is created. This is how Alban Berg proceeds in his opera Lulu .